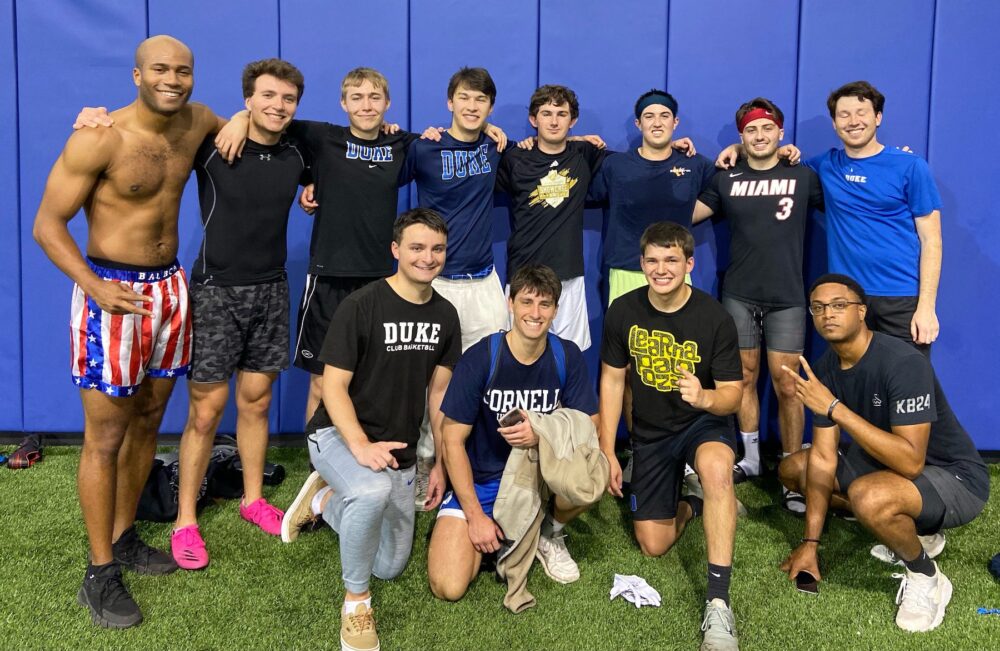 Revenge Tour: A story of friendship, fantasies — and flag football

The first question for Revenge Tour was easy: Why did they want revenge?

“Last year, we suffered incredible heartbreak, and we haven’t forgotten about it,” Nick Camposano, wide receiver, said, deadpan, although he had a hint of a smirk. Cameron DeChurch, wide receiver, linebacker and team captain, made no such slip-up. “This year is our last chance,” he said. “There’s no spring football.”

But could the revenge be bigger than that?

DeChurch is a visibly nice dude. Smiley and bright-eyed, texts with lots of exclamation points. But when it comes to intramural flag football, he’s hardcore — even after he got a concussion last year and had to desert his team before the quarterfinals, which they lost, hence the team name and mission. “He’s drawing up plays in our econ class. Our professor will be lecturing, and he’ll nudge me on the shoulder and show it to me,” Max Rego, center, said, chuckling.

For DeChurch, the championship dream started in second grade, as dreams do. As little kids rattled off what they wanted to be when they grew up — ballerina, astronaut, the usual — DeChurch fantasized about football. He was a pee-wee star and figured he’d naturally slip into starting quarterback at a school like the University of Miami or Duke. “And I wasn’t good enough,” DeChurch said. “So here I am, focused on academics.” He broke a bit and smiled this time.

For the other 12 Duke seniors on Revenge Tour, the dream started more recently. But they’re into it. Really, weirdly, into it.

Jake Piazza, safety, said the team has been a juggernaut. “Just been getting through the competition, running right through,” he said. They’re 7-0, making their way through the playoffs having ended the regular season with the second biggest point differential in the Open B division. The team’s good enough for Open A, said DeChurch, but signing up for the weaker league was strategic. “The problem is this backfired, because another team did that as well, and they have an ex-football player,” he said.

Revenge Tour, on the other hand, relies on dedication instead of D1 athletes. Grit over gravitas. And, in more ways than one, each other.

Exactly where to begin the story of Revenge Tour depends on who you ask. For Ryan Lynch, safety, the story is a merger. Lynch was on a 4 vs. 4 team last year with his friends Ben Eisinger, rusher, and Chandler Naylon, wide receiver. When the team size expanded this year to 7 vs. 7, they joined forces with some guys they knew — DeChurch’s team that lost last year.

But you can keep going back to a younger, postpubescent DeChurch. “I moved into my dorm sophomore year. We’re masked, outside. My mom and grandma are waiting in the hotel to hear if they have to do things or if they need to come back. And I see Rob and Nick throwing a football around,” DeChurch said. “Next thing I know, flash forward two or three weeks later, and we play football almost every day after class, Zoom class.”

And they didn’t stop with football. At a moment when life was defined by a six-foot radius of social distance, there was a certain sacred normalcy to throwing a ball, crashing into grass and talking trash. Sports “kind of kept us sane when we were locked up,” said Luke Vermeer, center and blocker.

A group chat grew to over 30 people for playing pickup sports: two-hand touch football, Spikeball, soccer. It ended up culminating in the “KVille Cup,” a soccer tournament complete with medals and a trophy.

Many members of Revenge Tour were recruited out of that group. Many are also classmates, roommates, best friends and bros. Piazza and Sam Mickenberg, center and blocker, bonded during fall 2020 while living off-campus — way off-campus, in Mickenberg’s cabin in the North Carolina mountains. “We quite literally lifted weights for two hours every day,” Piazza said. “It was fun. The whole, whatever, ‘gym bro,’ kind of deal. It was also an activity we could do and do together.”

“I can name at least four or five other people that could make a better quarterback than him,” DeChurch said. “He just likes to stir the pot.”

“For the good of the team, I’ve withdrawn myself from the quarterback competition and let Rob [Wilds] take it over, because I know I’m needed other places,” Johnson said. “I know I’m the better quarterback. I know I play better, practice better. I prepare better. But Rob really wanted to play quarterback, so I unselfishly yielded the position.”

Johnson had a lone defender. “I would say the people are asking these questions,” Lynch joked. “Rob makes one bad throw, and you hear, ‘We want Vance!’ from the sidelines.”

Three players told a story of a time Johnson threw a horrible pass to one of the team’s best receivers, Eisenger, then screamed that if he wasn’t going to catch the ball, he should “bat it down!”

Why bat down a ball in a game where the sole objective is to catch it? “We’re also looking for answers there. It’s unclear, but I don’t want to argue with the greatness,” Lynch said. Now, whenever anyone does something dumb, the other players yell to “bat it down!”

“You’re getting the story wrong. It hit him in the hands. He should have caught it,” said Johnson, linebacker and backup quarterback (disputed).

“We like to make a big deal out of everything,” DeChurch said: Fancy plays, intense huddles, ESPN theme music, scrimmages, the works. Not everyone goes to every practice or game, but they’re his favorite part of the week.

Piazza views the games as an escape from the everyday. “Last year, with being sports editor [of the Duke Chronicle] and class, it was a lot of crap going on, lots to fit in a day. But flag football, I would not miss,” he said. “It’s just the kind of thing where everybody restructures their week to be there.”

Some players, like DeChurch, Johnson and Rob Wilds, quarterback (undisputed), are in it for the game: stats, plays, a mishmash of sports commentary that they clearly live for. Others, like Vermeer, are there because their friends are.

Every Sunday, DeChurch texts the group to make sure everyone is sufficiently informed and hyped. “He literally gave me shorts, because you have to have shorts without pockets. And he gave me Lululemon,” said Piazza.

For now, Wilds is still in college, the amusement park of life, where a kid can live out his dreams of being a football star. Where a pre-law student can take ballet classes. Where you can try new things and fall on your face, over and over, until you move that tassel from right to left. But there was a pause on that discovery, that community, for the better part of two years, as the seniors on Revenge Tour know well.

“I don’t think the team would have happened if it hadn’t been for Covid,” Camposano said.

It’s easy to want some kind of revenge against Covid. It’s harder to be smiley and goofy,  bright-eyed and breezy. But in six months, these 13 guys are going to graduate, and life will move on, as it does. They might as well do it with an IM flag football championship under their belts. And with friends, new and old, at their sides.

Camposano had a follow-up when asked why he wanted revenge. He said, “I don’t think it’s revenge on anyone in particular. I think it’s more redemption of ourselves.”

The sentiment could be something worth stealing from Revenge Tour’s playbook. So much is impossible to control: whether you get a job, who wins an election, if a pandemic is coming. But find a few buds and a willingness to be a little weird, and there are so many ways to focus on the good in our lives and ourselves. So many ways to play ball.

EPILOGUE: On Dec. 1, Revenge Tour competed in the Open B Championship game, with all 13 members on the field. The team won, 7-6. The revenge was complete.

Photo at top: Twelve of the 13 members of Revenge Tour after a game (Photo courtesy of Jake Spruance/Cameron DeChurch)