Home » A Durham moment: “This is what I dreamt American college of being” 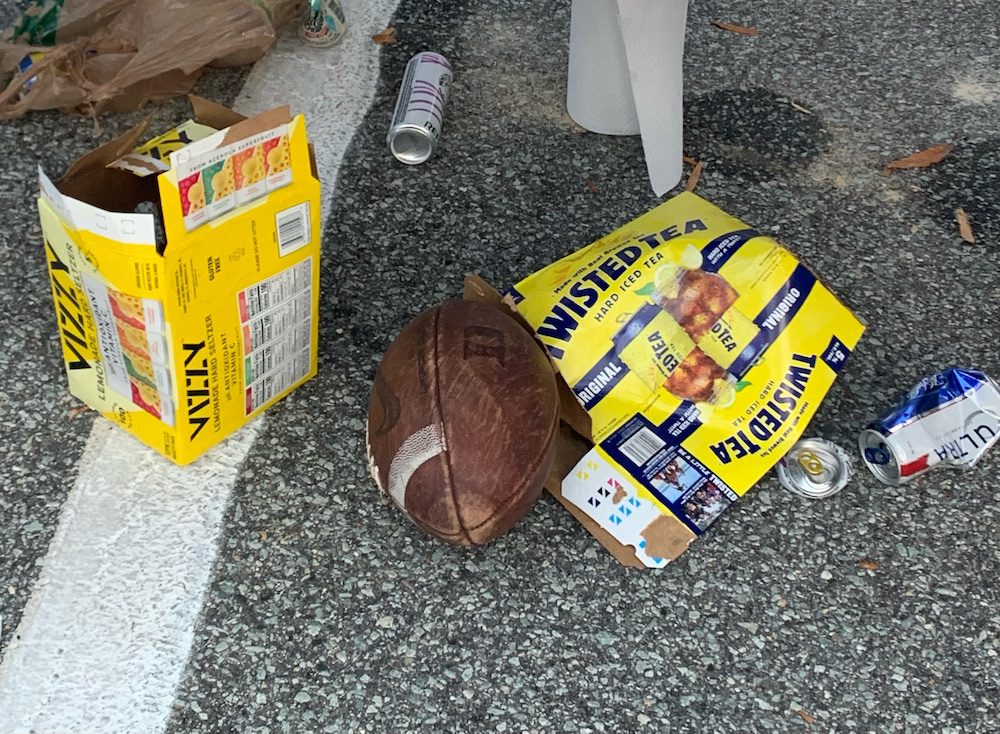 A Durham moment: “This is what I dreamt American college of being”

A parking lot on a college campus is a funky place for cosplay. But Duke University students and their parents rose to the challenge Saturday. “I walked in here and went: ‘This is so American. This is what I dreamt American college of being,’” marveled Alanna Manfredini, a junior from Sydney, Australia.

This specific parking lot, the one beside Cameron Indoor Stadium, is no stranger to madness, or greatness, as the launching pad for celeb athletes including Kyrie Irving and Zion Williamson (Kyrie, like the frat bros setting up pong, appreciated that the land was flat).

Like any good party – and any good cosplay –  the tailgate included things that made no sense to an onlooker, but probably had a reasonable explanation: a piñata hanging from a tree, a guy in a Harvard sweatshirt (Duke of the North), four people in leather clothes better suited to a sex shop than a college locker room and another guy in an “In Mike We Trust” hoodie.

The parking lot is no stranger to Mikes, either, as the neighbor to famed Krzyzewskiville, named after the legendary and recently retired basketball coach. Duke students camp out there annually for three to six weeks for the Duke-UNC home game.

But this was a different sport, a different Mike — Coach Elko, a new hire for Duke’s football team, coming off a standard 3-9 season (0-8 in conference). And he’d been waiting for this UNC game for months.

Since the start of his tenure last December, Mike II has thrown T-shirts at basketball games. He rebranded the team on social media. He made NFTs of helmets. (Don’t ask.) He even purchased every freshman a customized jersey with their last name on the back. Then, when the upperclassmen complained, he went into his pot of gold and gave one to every other Duke student, adorned with their class year. (It’s hard to find lunch on campus for less than $12, but at least when students pass out from hunger and hit their heads, they’ll Bleed Blue.)

Parents’ weekend was Elko’s moment: He had a captive audience. Parents will follow their college-aged kids to anything. They’d watch their daughter study economics on the exercise bike in the basement of Lilly Library if it meant spending time with her (not speaking from experience).

Alongside the jerseyed students, there were an inordinate number of men in polos (nine at one glance). Others sought a less J.Crew vibe. A guy in a backwards khaki hat and a 2010 basketball championship shirt walked by the port-a-potties.

A girl received a text from her boyfriend saying his dad had just shotgunned a beer. Another dad put his AARP card on the pong table to mark his place in line. Another took a tiny bottle of Jack Daniels out of his sock and poured it in the can he got for free at the Coca-Cola tent. He also had a shooter of Jägermeister on him, which he drank later. (Never mind that hard liquor is not allowed on Duke’s West Campus, a rule that’s followed scrupulously.)

Against rows of tents with names like “True Blue Cue’ Crew,” “No Punt Intended” and “In Full Compliance,” three UNC students looked disconcerted behind enemy lines. Why were they here?

Another UNC fan, walking up to the tailgate, looked out into the distance.

“That chapel is pretty,” he confessed.

A half hour before kickoff, a crowd began to huddle near KVille, where a jumbo flat screen showed the Tennessee-Bama game. It was 49-49 with 15 seconds to go. There was audible cheering when Tennessee kicked a game-winning field goal as the clock ran out.

Duke lost in the final 16 seconds to Carolina, another Tobacco Road gut punch to students who had, earlier this year, watched UNC humiliate Duke twice, once in Cameron and once in the Final Four.

But no worries there. Basketball’s back on Friday.