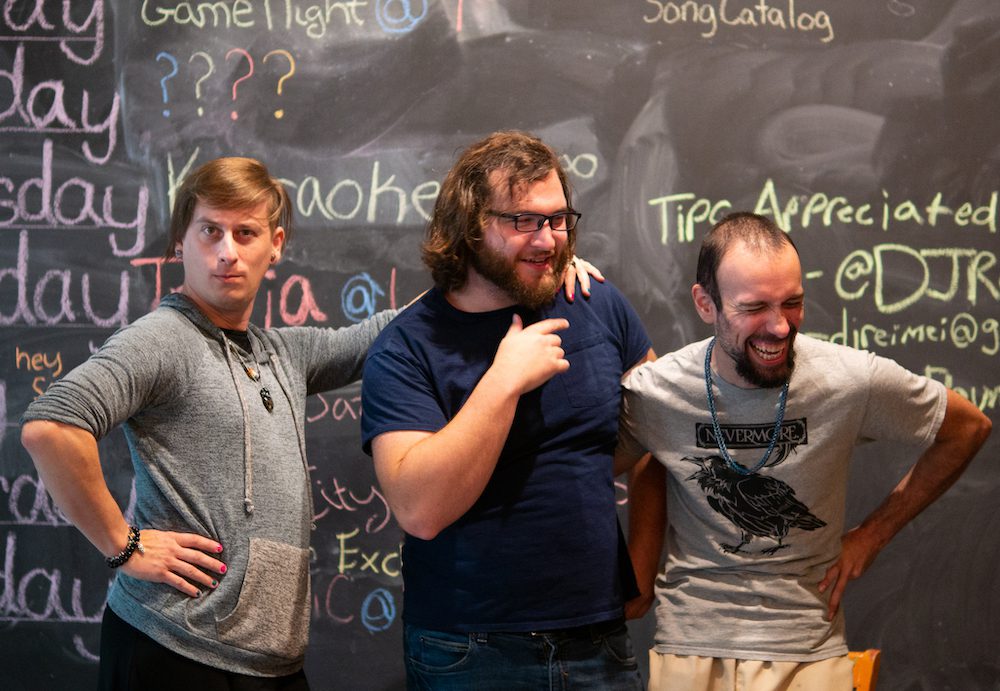 A different sip: Meadery serves up honey-based brew and more

Eleven years ago, Derek Forrest tasted mead for the first time at a renaissance fair. The alcohol made from honey, which tastes more like wine than beer, took hold of him. He returned home and told his parents, “I want to make this. This is amazing.”

The first batch that he made was horrible.

Now, Derek Forrest and his business partner Kenneth Thrower operate their own meadery. Under Joe Van Gogh coffee shop, a few blocks off Duke University’s East Campus, sits Moon Dog Meadery. Forrest and Thrower chose the name because “It sounds like the right level of ‘We don’t take ourselves too seriously but we’re not complete idiots,’” Forrest says.

The name reflects the spirit of the place. On one side, the shelves are stocked with beers with the names “Big Chocolate,” “my mind is in the coconut,” and “Wheat Dealer.” Along the walls is a collection of whimsical paintings, string lights, and an assortment of board games. On a recent Thursday, hard rock was playing when I walked in.

In 2020, after working 15 years in the restaurant business, primarily at a Chili’s, Forrest was fed up with the corporate side of the restaurant industry. Thrower pushed him to seriously explore the possibility of opening a small business.

Over the pandemic, they began gathering enough money to begin looking at spaces. They started touring local wineries and meaderies to see how their business might operate. The idea was to open as the pandemic eased up. “We signed our lease when things were looking good,” Forrest said, “and then Delta hit three weeks later. The week before our opening date, the news about Omicron hit.”

But the pandemic didn’t stop them. The day after Christmas 2021, three days after receiving approval from the state ABC commission, Moon Dog Meadery opened as a bottle shop. Its first batch of mead was ready in March of 2022. 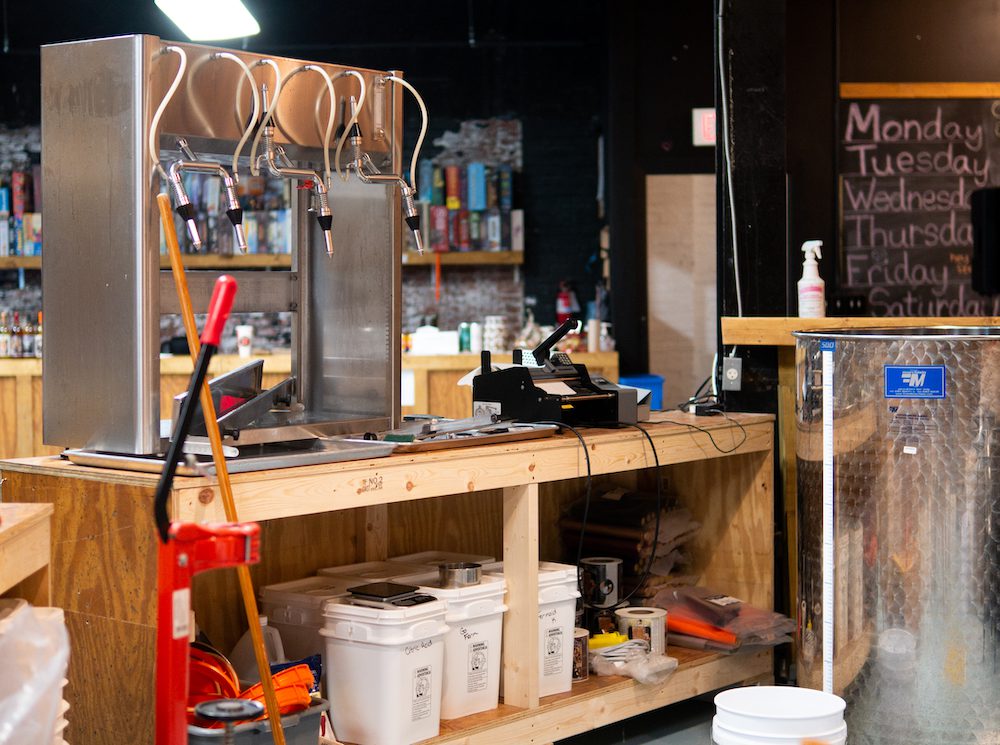 In the middle of the space sits what looks like the lab of a mad scientist. Vats of honey and yeast, nitrogen tanks, and smaller testing batches lie on the floor. While it takes up a bit of their space for customer tables, Forrest explains that it’s a “great conversation piece.”

Most of the customers that walk into Moon Dog Meadery have never tasted mead. Right out in the open, they are able to watch the process of making it, which Forrest is happy to explain. But when asked to describe what mead tastes like, Forrest struggles.

He’s right, you’ll taste what you taste. I tasted a sweet white wine with honey stirred in.  Forrest’s favorite flavor is called Blood of the Dog, a dark name for an infusion of blackberries, raspberries, strawberries, and blueberries. Hair of the Dog takes coffee from the shop’s upstairs neighbors and mixes it with vanilla beans, milk and sugar. That’s his dad’s favorite. Dreamcycle is infused with oranges to create a creamsicle flavor for the summer. He plans to make a butterscotch flavor for the holidays.

Meaderies have been popping up over the last few years. According to the American Mead Makers Association, there are now 500 meaderies in the United States. A new one opens almost every three days. There are currently 10 in North Carolina. When asked about why that might be, Forrest responds that following the craft beer revolution, “People are experimenting with new ways to make alcohol in a way we haven’t really done in centuries.” 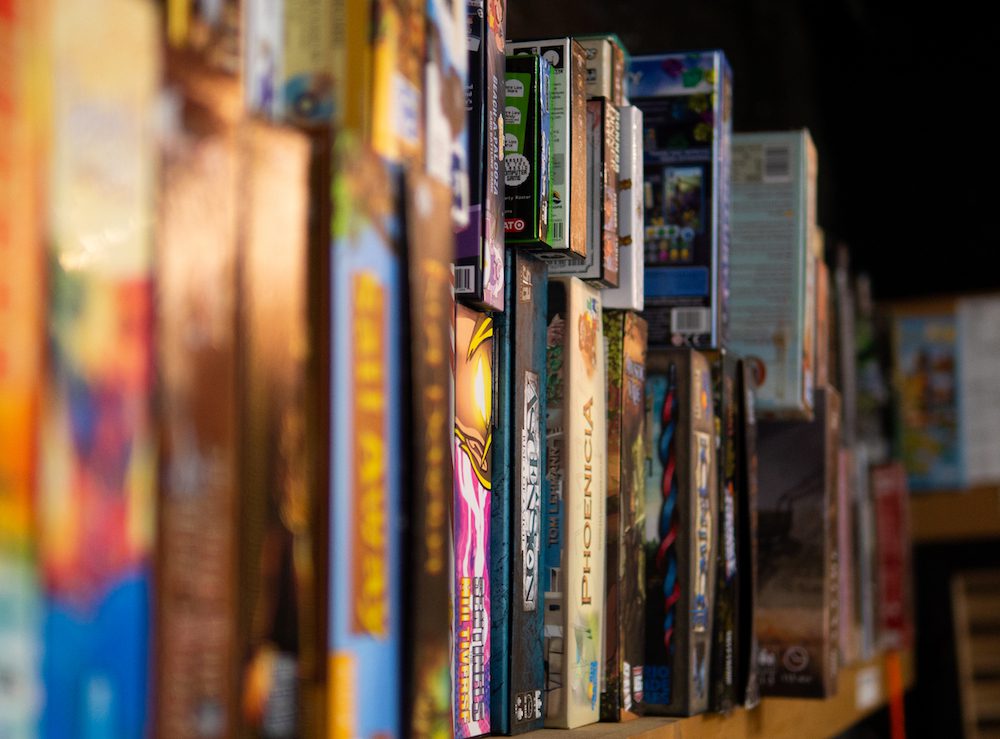 On some nights, everyone’s pouring from the tap and they can run through two kegs of mead. On others, customers are sipping on beers from the meadery’s selections. Forrest says he and his partner have tried to make the prices accessible for all: each drink costs between $4 to $9.

Moon Dog hosts something every single night of the week. A chalkboard advertises each activity. On Mondays, there’s community board game night. The most popular game is Catan, although Forrest hates the game. “It is a game of strategy and trading that relies on dice to determine who gets what resources. I take issue with that.”

Tuesday nights alternate between a gathering of Durham writers reading their science fiction stories and a group that plays Dungeons and Dragons. Wednesday night karaoke is a recent addition. Thursday has trivia. Every first Friday of the month has swing dancing. One Saturday a month the meadery hosts a comedy night, where one man in his 70s routinely comes in to perform standup. On Sunday afternoon there’s a language exchange. A group currently comes to practice Japanese every week. 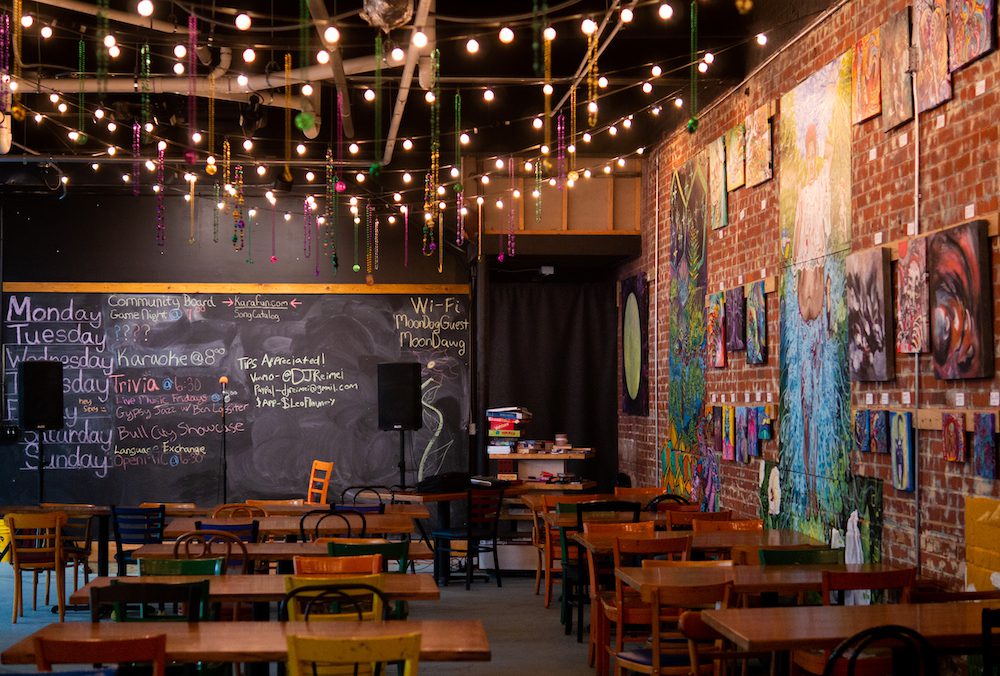 For Forrest, these ways of reaching the Durham population are the most important part of owning Moon Dog. “As a small business, if you’re not supporting a community, then why should they support us. There’s nothing going on that says that people in the area need to come down and buy from us.”

The art on the walls was created by local artists. The beer and wine purchases also support other local businesses, since Moon Dog only buys from within the state. This does leave them with slim pickings for wine choices, Forrest admits.

Photos: (At top) Moon Dog Meadery co-owners Derek Forrest and Kenneth Thrower together with their bartender, who goes by the name of Q; (center and below) scenes from the meadery, where mead is produced on site and events take place each night of the week. Photos by Kulsoom Rizavi — The 9th Street Journal

Published in Business and Life in Durham