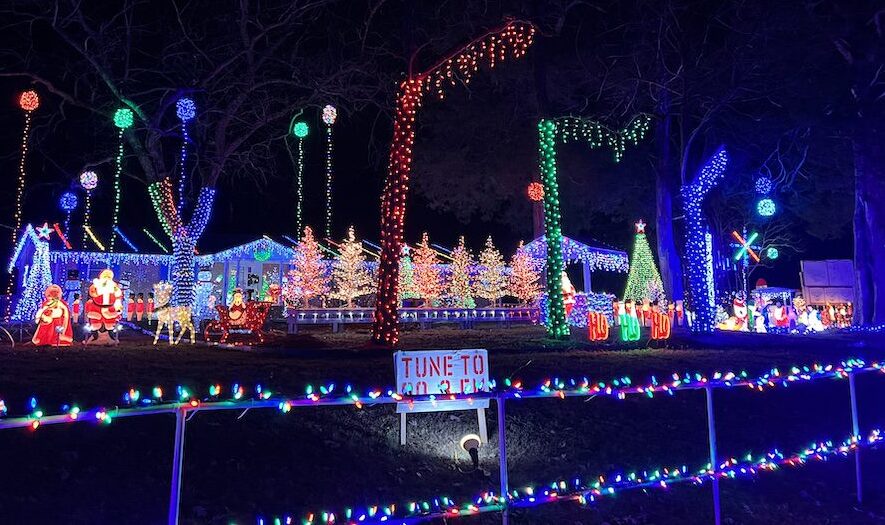 Traveling north up Guess Road, the darkness of the trees and fleeting houses is broken up suddenly by flashing lights. On the right side of the road sits a winter wonderland with a sign telling people to “Tune in to 90.3 F.M.”

Searching through your radio you’ll find that all the flashing lights you see in front of you are synchronized to each beat and lyric of Christmas music. There are 120,000 lights in blue, yellow, purple, green, pink, and red. They light up Mr. and Mrs. Claus, trees, “Ho Ho Ho” signs, a nativity scene, Snoopy, toy soldiers, a snowman holding a countdown to Christmas sign, and more. The playlist is 68 songs long, spanning from “Santa Claus Is Coming To Town” by Mariah Carey to “Yabba Dabba Yuletide” by Brian Setzer Orchestra.

The house at 7510 Guess Road is dripping in cheer. 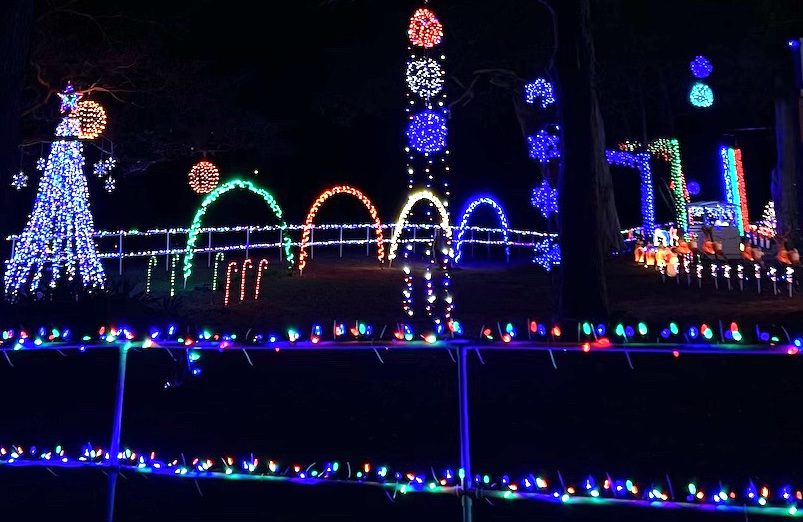 Mary Jane and Terry Mangum are the self-named “Crew of Two” who put the show together. When describing how the tradition began, Terry and Mary Jane chuckle. Terry describes it as an “affliction” more than anything else.

Mary Jane is from Brooklyn, New York and in 1979 the couple visited her childhood neighborhood. Terry was entranced by the lights along the street. “I just really like Christmas lights,” Terry says. They got married in 1986, moved into their first house in Durham, and he was finally able to put up lights in their yard on Daffodil Lane.

At first, the lights were static. Also, the Mangums were at the end of a dead end street. No one was making an excursion to see their lights. 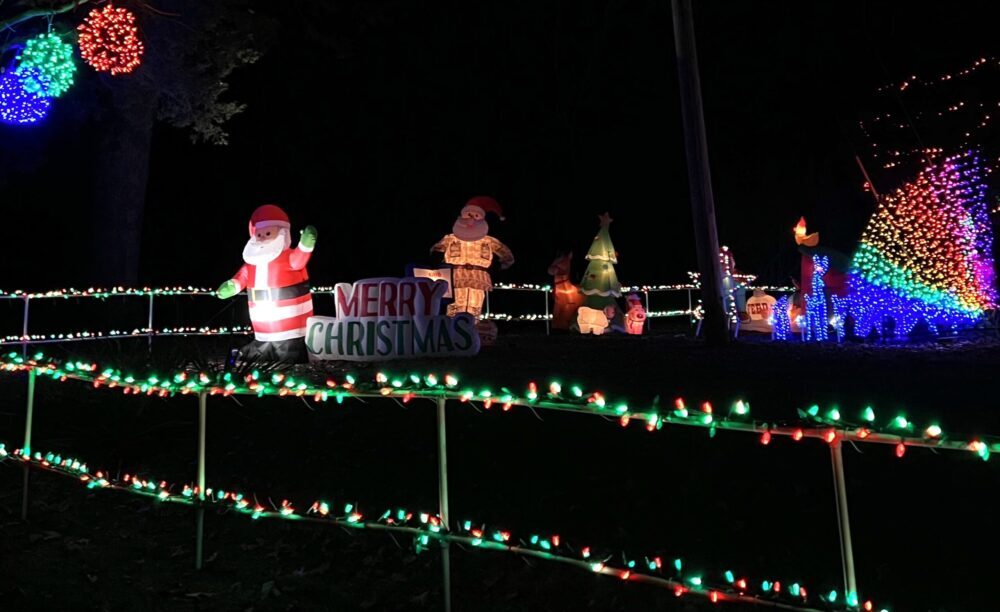 In 2006 everything changed. With a device called the Light-O-Rama, they could synchronize the lights and music. They started with six songs on a constant repeat. Terry explains, “You just pick a song and then with that program, you sit there and tell the computer when you want the light or when you want it off.” It also added to their preparation time. “It’s a long tedious process,” Terry says, “At the time it was taking, probably anywhere from eight to twelve hours per minute of song to get everything synchronized.” They add on a few songs each year.

When word traveled of the light show on Daffodil Lane, cars lined the entire street, taking turns three at a time parking in front of the Mangum house to get a peek.

In 2013, they moved to Guess Road. There, people could pull off to the side of the road and spend time listening to the music and watching the lights for as long as they wished. The Mangums were also free to expand their show. They didn’t have neighbors close by to worry about on their 25 acres of land. 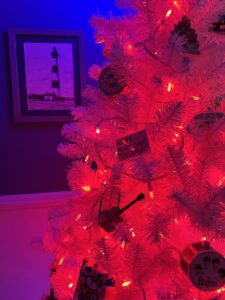 They now have a tree that they refer to as a “peacock tail.” It has 16 different strings of lights that can link to music. In the song “Disco Santa,” a tune that replaces Y-M-C-A with N-O-E-L, the tree acts out scenes of reindeer and children.

It is an immense amount of work for just the two of them. “We’re not as quick as we used to be,” Terry says, “And we always try to have it ready the Sunday before Thanksgiving. And we were able to do that this year.”

To the Mangum family, it is proper to play Christmas music even before Thanksgiving. The light show begins at 5:30 p.m. each evening and ends at 10:00 p.m. Sunday through Thursday, and   Friday and Saturday at 11:00 p.m..

From inside the house you can hear the faint singing. Mary Jane says, “I end up humming every song.”

When asked about why they put so much work into this tradition, Terry responds, “Well, you know, remembering the reason for the season and the tradition that families share with us.” Families come by each year in their pajamas, cradling mugs of hot chocolate. Each night there are cars lined up watching in awe. 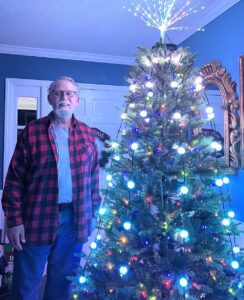 On their Facebook Page, the couple posts updates of how the setup is coming along starting in early September, the playlist for each evening, and new additions to the light show that year. Fans respond with eager anticipation for the beginning of the season.

Terry appreciates how much joy it brings to visitors. “It’s them telling us how much it means to us and they thank us, and I’m thinking to myself, ‘We enjoy these lights ourselves.’ Everybody has this just a beautiful smile on their face. It just makes you feel good.”

The lights will be playing until New Year’s Eve. They shut off just before midnight. Terry says, “That gives us time to get in and get ready to watch the ball drop.”

The Mangum family’s obsession with lights has spread joy across Durham County for 36 years.  Still, Terry jokes, “We don’t want anybody to get electrocuted. That wouldn’t be a lot of fun for the celebration of Christmas.”

Above (from top): The Mangum family’s front yard, lit up for the holidays; Terry Mangum stands by one of seven Christmas trees inside the Mangum home. Photos by Claire Kraemer—The 9th Street Journal