Home » Stop and take the roses 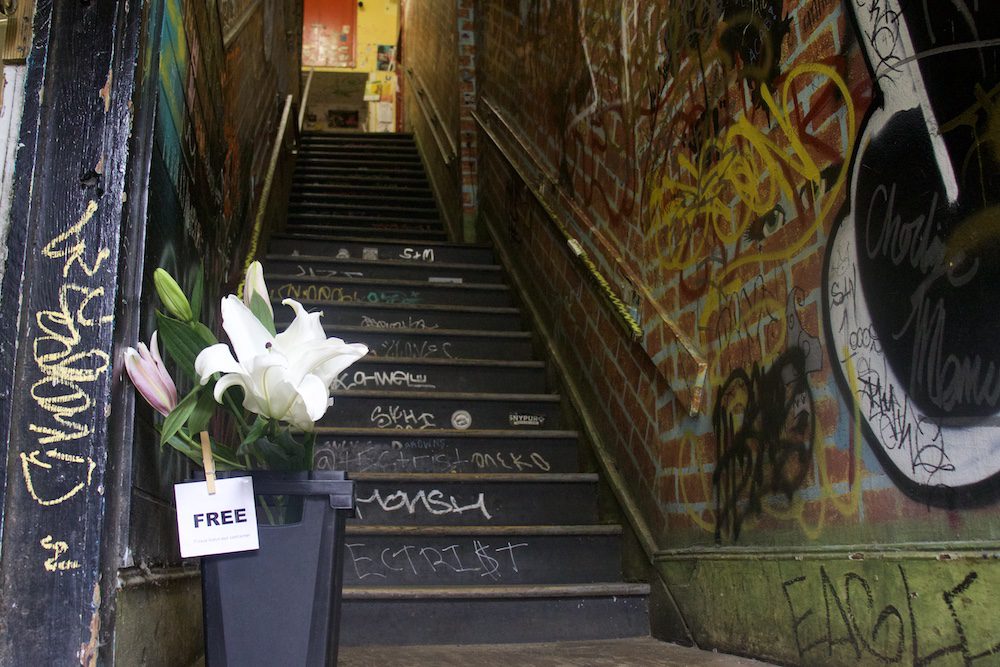 Stop and take the roses

In the stairwell that leads up into the cosmos — ok, the Mexican restaurant on the second floor — a bin sometimes appears, full of flowers. The bin — black, plastic, 2-feet tall, and about as plain as they come — is one of Durham’s accidental secrets.

It sits at the back door of Ninth Street Flowers. More OfficeMax under-desk-trash-can than vase, the bin is nevertheless filled with water and whichever over-ripe blooms can’t go in the fine flower shop’s expertly curated bouquets. A notecard, attached to the bin with a clothespin, says “FREE.” You can take any of the pungent blooms you desire, but “Please,” the flower shop asks in tiny letters, “leave our container.”

The flowers, tucked away in the narrow graffitied hallway, are a generosity afforded to all who might almost trip over the bin that holds them. (Were I an English major at some fussy school, I might be tempted to note the juxtaposition of the scene — the fresh flowers in a practical trash can, the natural beauty of roses coupled with scrawled tags that say everything from “it’s yea moms fave” [sic] to “death comes for all of us” to “Dan + Bryn” to “monsh,” whatever that means.)

The barrel of fresh blooms feels a little out of place in the hallway, but these flowers have been ousted, unceremoniously, from the cooler inside Ninth Street Flowers. Their new home, in the black bin, is only temporary. Plenty of people pass the flowers. Some lean in to (literally) smell the roses. Only a few stop to actually pick one up.

Today the first is a teenage boy in a white T-shirt, gold chain, baggy gray jeans, and —the accessory of a generation — AirPods. As he enters the hallway to Cosmic with two friends in tow, he snatches a single pink rose. The flower is still coiled tight around the bud, it has barely bloomed, and he seems much the same. He leans against the walls as I ask about the bloom in his hands.

Despite the “FREE” sign on the bin, he isn’t eager to discuss nabbing the flower. He answers questions with one- and two-word answers and seems ready to call his lawyer if I get any more persistent. He gives only his first name, Vincent. I ask how old he is; he says he is 17.

Asked why he took the flower, he shrugs. “Looks nice?”

Has he ever taken a flower before? Indeed he had. What did he do with it? Gave it to a friend. When I ask about the nature of this flower-loving friend he just lets out a single chuckle. His friends crack up. Realizing I have no power to detain them, they retreat upstairs for The Best Mexican Food on the Planet.

I get a bit more from Connor Bost, 17, and Ambrose Kee, 17, than I did from “Vincent.” The boys, so in sync with each other that even the tint of their lavender shirts match, are taking a lunch break as they study for finals.

Teenage boys — save once a year for prom season — aren’t exactly the target demo for flower shops like Ninth Street Flowers, but the boys, fresh off their Mexican food binge, are bubbling over the bin marked “FREE.” Connor has picked up a rose and Ambrose is about to — he’s taking a second to decide.

They are students at the North Carolina School of Science and Mathematics just a few blocks away. Delighted by the sweet smell in the air as they exit the building, their sunny demeanors don’t seem like those of stressed-out juniors (or as they prefer, “almost seniors”). But they are stressed out about finals. The flowers, not usually purchased as study aids, are coming in clutch. The rose he is now holding is the perfect “destresser,” Ambrose tells me. Connor’s lips curl into a smile as he looks down at his rose and nods in agreement with his friend.

The bin, when it appears, seems to materialize by magic — pushed out the back door by a disembodied hand. The hand belongs to Karen Flueck-Holveg, the general manager of Ninth Street Flowers. She is charged with caring for the bin.

Ninth Street Flowers has been putting its unused flowers out into the back hall for as long as Flueck-Holveg can remember.

Pre-pandemic, the flower shop made sure to put out the bucket-o-blooms on Saturdays when little ballerinas, with pink tutus to match bubblegum roses, flocked to a class upstairs at Ninth Street Dance.

But it’s not just about serving Cosmic diners and tiny dancers. As nice as it would be to just give away flowers, the program is, at least in part, practical. Ninth Street Flowers needs to keep its selection fresh.

“Flowers,” Flueck-Holveg says, “are like lettuce.” To stay fresh they have to stay cool. And even if they stay cool they still go all super-unappealing-brown-limp-romaine after a while.

They’re kept in a cooler so dense with flowers and greenery that it looks like a rainforest. The employees remove wilting blooms and move“flowers that are not quite good enough to put in somebody’s arrangement” to the black bin.

Perhaps those flowers only have one or two perky days left; perhaps the flowers are just a little funky. Either way, Flueck-Holveg says, “they’re still beautiful, somebody should enjoy them.” So out into the hallway they go.

Photo above: The bin with free flowers in the stairway to Cosmic Cantina. Photo by Maddie Wray – The 9th Street Journal