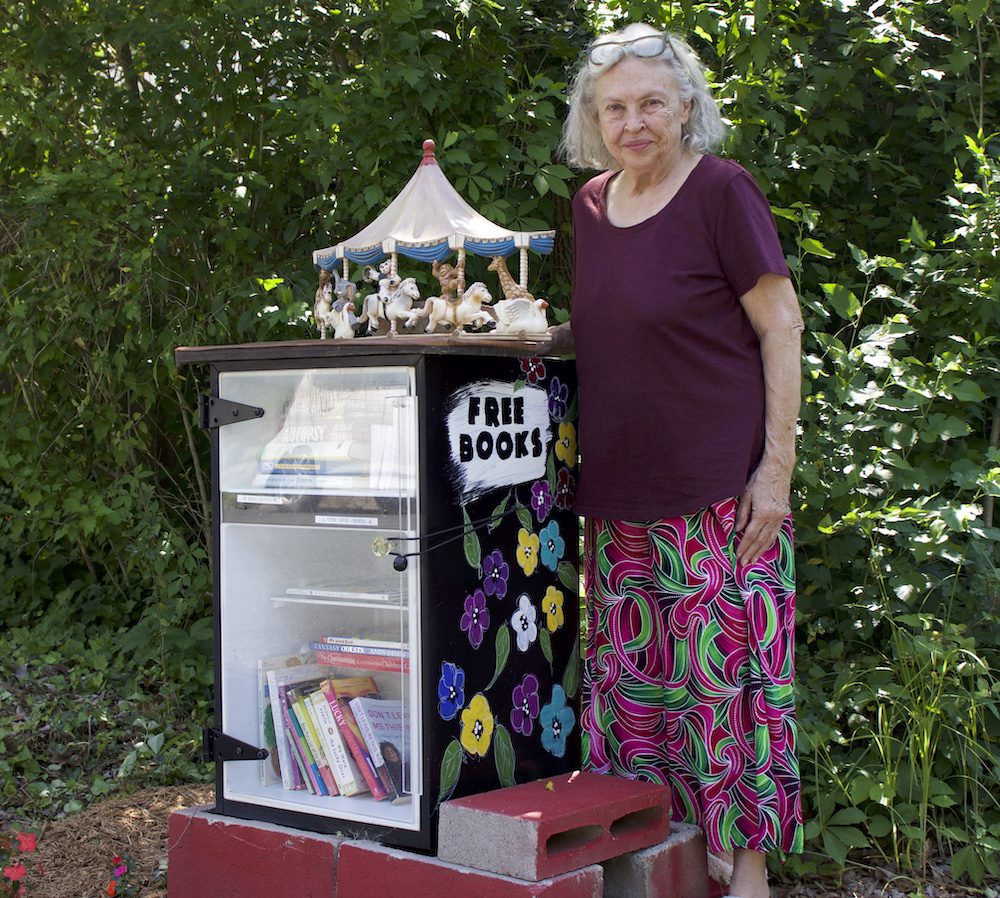 The characters behind Durham’s tiny libraries

There’s a mini-fridge in a front yard on Shepherd Street. At first glance, it looks like the Whirlpool has lost its life to the vicious cycle of college move-in and move-out. In its heyday, it would have been home to half-eaten Taco Bell orders and 12-packs of Bud Light, but it is now filled with books new and old (that the Bud Light drinkers probably didn’t read). The mini-fridge in Morehead Hill is one of Durham’s many tiny libraries.

On this day it contains a random assortment of what Durham is reading (or … not reading): A History of Japan to 1334, Fluffy Bunnies and The Maddie Diaries: A Memoir. Like all the tiny libraries, the books in the fridge are free for the taking so long as the borrower replaces the book they take with one of their own.

There’s no official count, but a map kept by Kat Barbosa, an enterprising tracker of the little library movement, indicates more than 150 in Durham. Some are part of a national nonprofit called Little Free Library that sells, standardizes, and tracks the outposts for literary freecycling. Others are unaffiliated — and even include the occasional mini-fridge. Together they provide Durhamites with all the James Patterson novels (there seems to be one in every box) they could (n)ever read.

Typically, the tiny libraries aren’t former beer chillers. Usually they are wooden boxes, about half the size of a mini-fridge, mounted on posts and planted where passersby might notice them. Some are utilitarian, resembling birdhouses. Others are more ornate — carved into the side of a tree or built out of a repurposed newspaper box.

In the age of e-this and upload-that, with the contents of infinite libraries available to readers at the click of a button, the thought of even heading to the local public library seems to be a dream of days gone by. Little libraries, with an even littler selection — often of worn-out books, and, sometimes, a tinge of mildew — seem the antithesis of the digital age. And yet, they are thriving.

Some contain more than books. Everything from old magazines to glittery high heels to pieces of garbage have made their way into Durham’s little libraries. A repurposed kitchen cabinet with a living roof at 1402 Vickers Ave. played host to three books and a crushed Celsius energy drink can. The can — although recyclable — was not quite in keeping with the spirit of the literature recycling project.

Trash is not the only threat that little libraries face. Some in other cities have fallen victim to zoning violations, others to the elements, and some have been the subject of skirmishes over which officially qualify as “Little Free Libraries.” But the fundamental betrayal of the “take a book, return a book” model is likely the most damaging. One of Durham’s little library owners took to Facebook to explain that “every time I fill my library with books, they’re all cleared out the next day.”

Donations are the lifeblood of the little library movement, but they can also be a bit of a pain when people, “not fully understand[ing] the take a book, leave a book kind of thing,” drop “baskets or boxes of books” at the base of little boxes that couldn’t possibly accommodate them. That’s what Amanda Waldrop, 38, the steward of the brightly colored wooden library on North Willowhaven Drive, experienced.

“There were a lot of people who were purging during the pandemic too, so I feel like I got a lot of the purged items and they [were] making it my problem now,” Waldrop says.

The doula and mother of two wasn’t thrilled about adding another task to her to-do list, but the occasional cleanup doesn’t dampen Waldrop’s enthusiasm about her Little Free Library. A 2019 birthday present from her family, it was the perfect addition to her front yard.

Killing time while her daughter is at dance class, she is dressed in blue jeans and a white short-sleeve T-shirt that shows off the elegant floral tattoos on each arm. Her eyes widen as she talks about her love of books. Her job, which she also loves, gives her the flexibility to spend time with her kids and to spend most of her day reading.

The Little Free Library prods her curiosity too. “It’s exciting,” she says between sips of green juice, “to see books that I might have on my ‘to be read’ lists that maybe I forgot about” getting delivered to her library. When they “pop up it’s a nice little reminder from the universe – oh, this is a book you wanted to read.”

But she emphasizes that her little library isn’t about her: It’s about her community. Her front yard is a playdate paradise, complete with a swingset, set back from a sidewalk-less road. At first she worried that people wouldn’t see her little library, but she’s found that neighbors stop by almost daily. She loves when they do — sometimes even taking a moment to chat with her about the books and the magic of reading.

Kat Barbosa, 33, is neither owner of a little library nor a big reader, but she is a key player in the ad hoc Durham community: She meticulously keeps the color-coded, ZIP code-sorted, master list (a Marauder’s Map) of Durham’s little libraries. But she is quick to point out that she is not affiliated with the official “LFL organization.” Her map, which has been posted and reposted in many-a-Facebook group, was not “made in any ‘official’ capacity,” she is, in her words “just a nerd.”

But Barbosa, an administrative assistant at an organic grocery broker, isn’t just anything. Sure, she’s got the glasses to back-up her nerd assertion, but they are funky, paired with an ever-cool floppy pixie cut and a wide smile.

In a town of book lovers served by the official “LFL organization” as well as plenty of other passionate  but unaffiliated library owners, Barbosa realized “that there was not really a central way to find them all.” In Durham, she estimates that at least half of the little libraries were not on the LFL’s official map, so Barbosa sought to fill this gap.

Barbosa hasn’t gotten around to getting her own little library. She is a relatively new home owner, and her energy has been focused outward, on getting a little library for her daughter’s school. What’s more, when asked if she’s a big reader, Barbosa — voice lowered as if she’s admitting a guilty pleasure — responds “you know…I’m actually not.” She bursts out laughing.

This proclamation seems abstract until her daughter wanders into the kitchen where we are chatting. Barbosa says Eliza, 11 is, “a super avid reader” who  is “always acquiring more books.” When Barbosa notices “oh, the books are literally falling off [her] shelf,” it’s time for Eliza to pick a few that she doesn’t want anymore. The little libraries are also convenient places to donate — especially when you know where all of them are.

The mini-fridge in the 800 block of Shepherd Street is not on Barbosa’s map — yet.

The librarian of the mini-fridge is longtime purveyor of books Karen Stinehelfer, 78. Before landing in Durham, Stinehelfer owned the Genealogists Bookshelf, a rare book store on Manhattan’s Upper East Side once heralded by mention in the New York Times. Now, instead of selling out-of-print manuscripts, she gives away teen romance novels. A downgrade? Stinehelfer doesn’t think so. It’s not about the press, the ZIP code, the price tag (or lack-there-of), it’s all about the love of books.

Rocking gently on her pillow-laden patio couch, she gestures toward the converted dorm room appliance and boasts that it “stays watertight through snow, through rain, through everything.”

The former bookstore owner has found joy, once again, as a curator of books. When she gave that mini-fridge new life — TROSA trash turned into literary treasure — each book was chosen with care. Her approach was simple. “Good books only.” “Good” was everything from a set of American Girl doll books to an anniversary edition of Kerouac’s On The Road.  “There wasn’t any garbage at all,” she says, chuckling.

And there never will be.

Stinehelfer keeps bins of great reads on her porch, on deck to become the newest editions in the little library. No longer worried about turning a profit, she tends to her little library, curating its collection like the book shop owner that she is — or at least, was.

She relishes the little moments of her little library, such as seeing someone get a book and walk away. “Once in a while somebody’ll pass my car and they’ll have a book in their hand,” they’ll walk down the street the rest of the way, “waving it.” She cracks a smile.

Her quote about her bookstore, published in the Times in 1977, still rings true when you’re searching for a book in Durham’s tiny libraries. She told the paper: When people “can’t find anything it’s not because there’s nothing to find but because they don’t know where to look.”