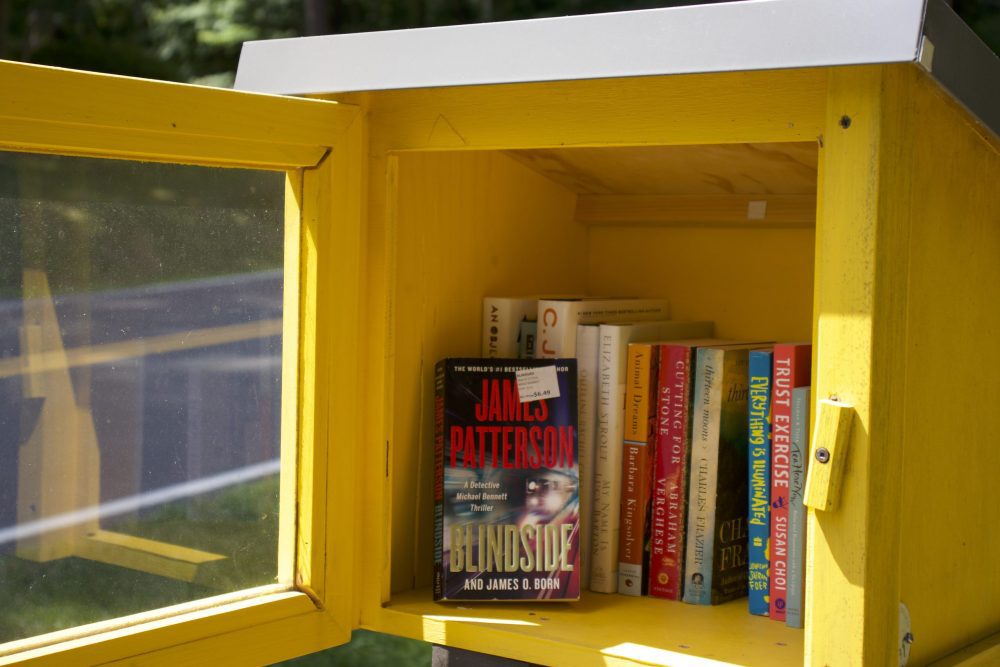 A peek inside Durham’s little libraries

I’ve long believed that browsing through someone’s bedside pile of books  — the stack that they are “going to get to” —  is more revealing than reading their emails. You find out who they are… and who they want to be. (It wasn’t too long ago that my bedside-pile was a blend of French existentialists and the entire That Boy series — That Boy, That Wedding, That Baby.) Lately I’ve concluded that Durham’s little libraries are our communal night stands.

So let’s get nosy.

We’ll start in Morehead Hill on Vickers Avenue, where the creak of a rusty hinge and faint scent of mildew mingling with that sitting-in-the-stacks-during-finals book smell announces the opening of this box of stories. The catalog is eclectic to say the least.

Adam Schiff, the congressman from California, is sharing a shelf with Catherine Hart, author of steamy not-so-historically-accurate romance novels.

Schiff’s Midnight in Washington: How We Almost Lost Our Democracy and Still Could and Hart’s Summer Storm both promise drama, but of a very different sort. The jacket of Midnight in Washington says, “If there is still an American democracy fifty years from now, historians will be very grateful for this highly personal and deeply informed guide to one of its greatest crises.” Summer Storm is also, um, highly personal, promising a “tumultuous joining” that “would be climaxed in a whirlwind of ecstasy.”

There are only three other books in the Vickers library — two recent(ish) mysteries and Robert Louis Stevenson’s Treasure Island.

If you are worried about your immortal soul after all that romantic rapture and death o’ democracy, I suggest you swing by the little library in the 1100 block of Woodburn Road, which has a robust spiritual collection. The books include Pleasing God, Peace with God and two copies of The Case for Christ. You’ll also find  Cornelia Nixon’s decidedly-not-religious Angels Go Naked: A Novel in Stories.

If books about God aren’t your speed, you might want to stop by the little library outside McMannen United Methodist Church on Neal Road — sure, you’ll find Bible Stories for Special Times, and one for kids about how God Made Nature.  But mostly there are thrillers, romances, and good mom-book-club-reads like The Last Bookshop in London.

The trashy-churned-out-thrillers from James Reich, James Patterson, and Clive Cussler are coupled with books by New York Times best selling authors written to be deep, and… to be New York Times best sellers. There’s Matt Haig’s How to Stop Time, which, according to its front cover, is “a great summer read.” There’s The Small Backs of Children which, according to the Los Angeles Times is “a tour de force,” and according to an Amazon reviewer, is “just trying way too hard.”

My survey found only one author whose books were seen in nearly every box: James Patterson. That’s not surprising, since Patterson has published more than 200 novels, but his presence, in tattered paperback and the occasional hardcover, was still impressive. Could you read his entire Alex Cross series by going from tiny library to tiny library? Perhaps.

My last stop is the biggest of the little libraries I’ve seen and as I try to peruse, I find myself struggling to unlatch the door. But the prize I find inside is well worth the struggle. It’s the screenplay for Shakespeare in Love. For the first time I am not just tempted to take a book, I do. I take it, and stash it in the book-strewn-backseat of my car.

I know my obligation and have come prepared. I return to the not-so-little library with something to leave: The Easy College Air Fryer Cookbook: The Complete Guide with Simple, Affordable Air Fryer Recipes for Campus Life.

Take a book. Leave a book. Add Shakespeare in Love to the pile that sits by my bed and taunts me.