Home » Election season is here, and candidates want your vote. Do signs matter? 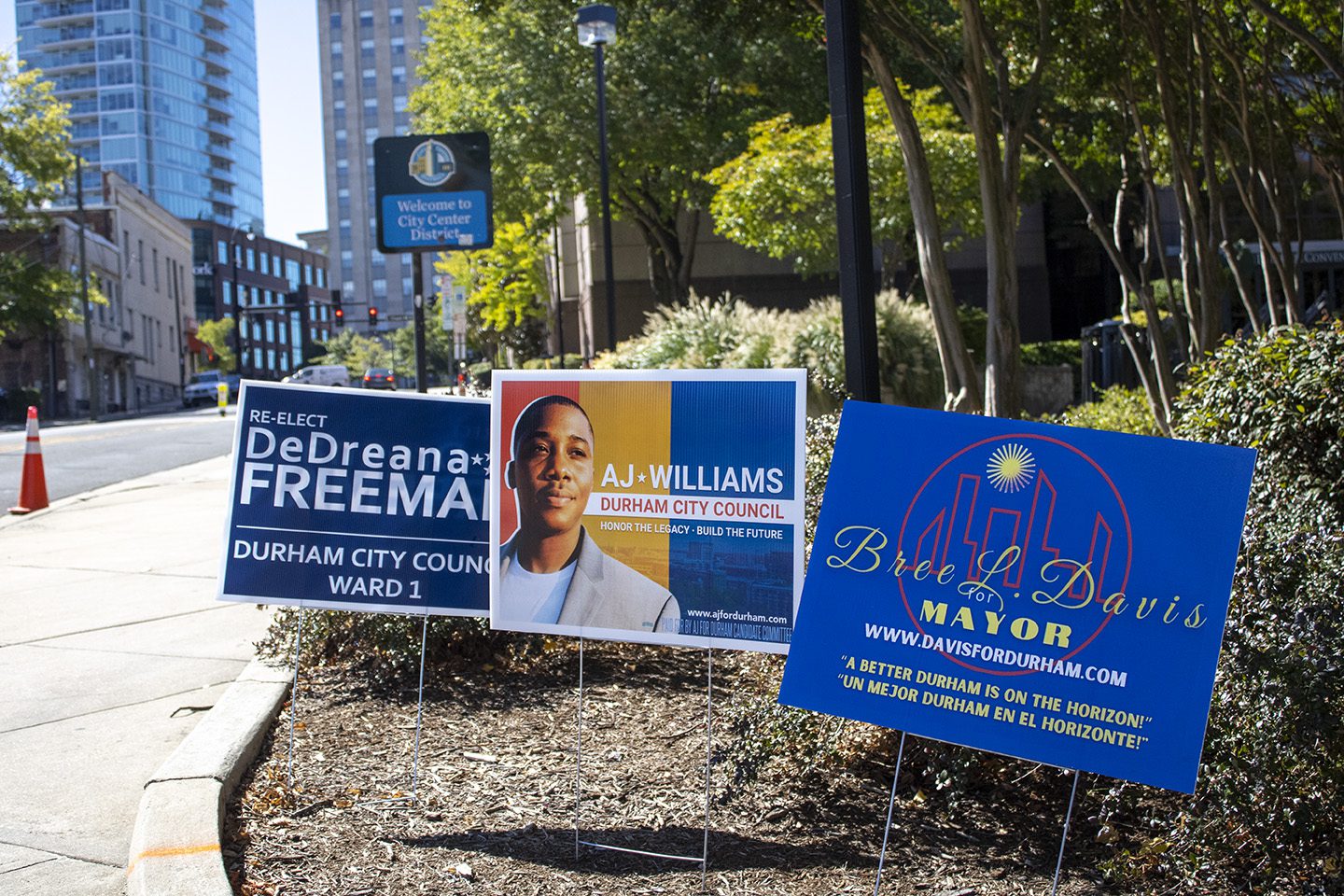 Election season is here, and candidates want your vote. Do signs matter?

Clusters of campaign signs across Durham vie for people’s attention. Some display slogans or a picture of the candidate, but all were designed to capitalize on the split second of attention they receive from voters.

Mayoral candidate Elaine O’Neal’s signs are the simplest, with a light blue background and “O’NEAL” in large white letters. Javiera Caballero, who suspended her mayoral campaign on Oct. 11, hired a local designer to create her signs based on input from her supporters. They say “VAMOS BULL CITY-JAVIERA FOR MAYOR” in white lettering with a purple background. (Caballero’s campaign materials always have a purple theme).

Ward III City Council candidate AJ Williams’s signs are decorated with several colors, slogans such as “Honor the Legacy”, and a photo of himself. They differ from the other simpler signs. From the start of his campaign, he saw yard signs as key investments. “Yard signs are a way to really maximize your ability to be seen across the city, even if you can’t knock every door, or make every phone call,” Williams said. “Durham is a city of over 300,000 people and the truth of the matter is, you’re not going to be able to contact all 300,000.”

Williams believes his nearly $5,000 investment in signs paid off in significant ways. People recognize him from his signs, even when he wears a mask. The vibrant graphic, combined with the image of his face, was intended to stand out. “I’m glad we made the decision to really do something different,” Williams said.

Durham voter Jimmy Lamont wishes more signs had photos of the candidates. He voted in the primary because his son knows one of the mayoral candidates. He’s unfamiliar with many of the other candidates, but he thinks adding pictures to campaign signs would help. “I don’t know none of these people,” Lamont said, gesturing toward the signs.

In the book “Winning Elections: Political Campaign Management, Strategy, and Tactics,” Becky West of Campaigns & Elections advised candidates to use simple yard signs and logos that emphasize their names. She added that signs should include minimal colors and bold lettering so that voters can see the candidate’s name. “Plan for simplicity,” she wrote. “An effective logo needs only the candidate’s name, the office sought, and possibly a simple graphic symbol.”

Signs may not be the decisive factor in a campaign, but they have a measurable impact. One study found that signs “had an estimated effect of 2.5 percentage points.”

Zach Finley, Javiera Caballero’s campaign manager, explained that campaigns try to place signs in strategic locations to “get the most bang for your buck.” Areas like intersections have high traffic rates, making them optimal locations for signs. He added that engaged supporters “really enjoy” putting signs up in their yards.

The cost per sign depends on various factors, but usually hovers around $2-$2.50. Finley said that Caballero’s campaign signs were more expensive than average due to their unique colors and material. Her campaign spent $2,433 on yard signs. O’Neal’s campaign spent $4,239.

Many Durhamites say that while signs boost visibility, candidates should prioritize engaging with constituents in more meaningful ways. “I had a hundred and something signs,” said Jan Oartie, who previously ran for Durham Soil and Water Conservation District supervisor. “But it’s more about me going out to meet people. I’d go to a farmers market and give out water. I’d be downtown when they had events.”

Charlitta Burruss, who lost her bid for Durham mayor in the recent primary, sees signs as expensive and unnecessary. She believes that candidates waste money on signs without showing voters that they’re willing to tackle important issues. “When I say ‘know’, I mean not just your name,” Burruss said. “I mean know who you are …  What is your agenda — your real agenda?”

Instead of spending money on signs, Burruss’s campaign strategy centered on news coverage and word-of-mouth. She relied on being a familiar face in Durham after years of working and volunteering in the city. “I feel like I market myself in many different ways,” Burruss said.

Signs may be a crucial tool for candidates lacking name recognition, but some believe that voters should get to know a candidate in other ways, too. Geneva Ennett, a Durham judge, said that candidates should have several years of experience working in the community so that voters are familiar with their names and what they plan to do in office. Still, “[signs] do make a difference,” she said. “They really do. They trigger people’s memories.”

John Weisman, who voted in the primary election at the Durham County Library, is not swayed by signs. Weisman prefers to read profiles, newspapers, and questionnaires and attend candidate forums. However, he does notice when opposing candidates have more signs around the city than his preferred candidate. “It’s more of an observation than a worry,” Weisman said. “There are segments of the voting population who are influenced by different things, so you need multiple strategies.”

Weisman can’t put up his own signs because he lives in a condominium. However, his friends display them in their front yards to show solidarity and boost their preferred candidates’ visibility.

Still, Durham voters ultimately support candidates who are integrated in the community, understand their struggles, and strive for solutions. “Everyone gets these signs,” Oartie said. “But are you out there in the community?”