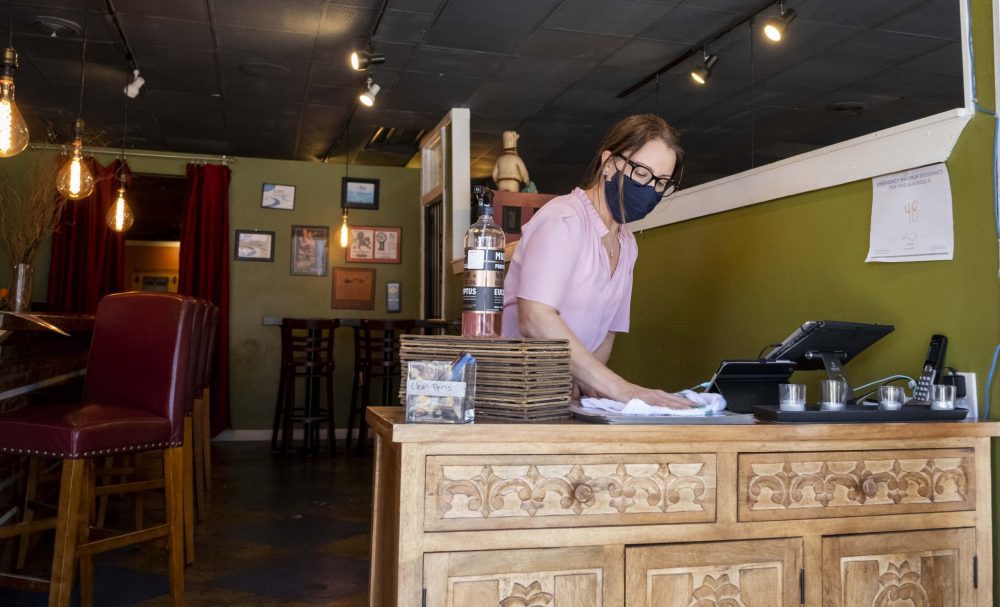 How the Blue Corn Cafe survived the year of COVID-19

At the Blue Corn Cafe, co-owner Danielle Martini-Rios keeps a close eye on her servers’ hands. When she trains them, her directions are clear:

In the age of COVID-19, these things matter. From the location of her servers’ hands to the menu, the pandemic has forced Martini-Rios to make adjustments to keep her restaurant afloat, her employees safe and her customers happy.

“I’m working harder today than I have since I’ve opened this restaurant,” she said. “This has never happened to any business before in my lifetime.”

Martini-Rios and her husband Antonio Rios opened the restaurant on 9th Street in 1997. He is the head chef. They run the business together. Their goal is to provide customers with authentic Latin-American food like slow-roasted pork barbacoa or the house favorite, the Blue Corn quesadilla.

Everything changed a year ago. As the coronavirus began to spread, Gov. Roy Cooper prohibited indoor dining and Durham shut down. Rios was caught off guard. She had to rethink the way she’d run her restaurant.

“I knew I had to get back out,” said Martini-Rios, a lively woman who wears her brown hair pulled back into a ponytail. “So, how do I make the biggest impact on my community? How can I still bring income in? And how can I try and keep some people employed.”

Almost immediately, Martini-Rios furloughed a majority of her kitchen staff, encouraging them to file for unemployment benefits rather than rely on the restaurant’s suddenly unpredictable takeout revenue.

She often had to improvise. When takeout orders started picking up, her sons pitched in. Her 15-year-old worked the line in the kitchen, and her 20-year-old began working up front waiting tables. Blue Corn also prepared meals to be delivered to workers at Durham hospitals and the North Carolina Department of Health and Human Services, courtesy of the city as well as corporate sponsors and the restaurant itself.

“We’ve all just taken on different roles,” she said.

The challenging times have meant the cafe had to scale back its ambitious efforts to be a green business. Martini-Rios said they have stopped composting, rethought menu offerings and reverted to plasticware instead of plant-based utensils.

“It’s not a great decision,” she said. “It breaks my heart to hand somebody a plastic straw, but I have to make tough decisions.”

When the state allowed indoor dining to resume June 1, she reopened with new safety measures. She put hand sanitizer bottles throughout the dining room, eucalyptus soap in the bathrooms, and scented candles on the counters to make people feel safe and welcome. Salt and pepper shakers were removed from tables along with all other condiments, now available upon request, to limit the number of surfaces customers could touch.

“We have to be particular because people are on edge,” she said. “It’s my job to look at the small things that make you feel comfortable.”

In previous years, holiday dinners at the Blue Corn Cafe have featured live bands with singers strolling through the restaurant. Now, the music is recorded and comes from the overhead speaker system.

Martini-Rios, who just turned 46, was born in Florida and grew up in between Italy and New Jersey with a family that loved playing soccer and cooking together. As she talks about her childhood, her eyes light up behind her glasses.

“We’re Italian people,” she said. “Everything we do is based on what we’re eating.”

Martini-Rios went to the University of New Hampshire with pre-med plans. Shortly after graduating, she moved to North Carolina to join a women’s soccer league and started waiting tables at a local restaurant. That’s where she met Antonio, who was the head chef.

As her passion for the kitchen simmered again, her plans for medical school faded, and she realized how much she enjoyed the restaurant business. Her life-long love of cooking and Antonio’s mastery of his native Mexican cuisine made them the perfect pair to open Blue Corn Cafe. They’ve never looked back.

Still, the year of COVID-19 has interrupted some of her dreams.

Martini-Rios had begun to save money to buy herself a Porsche. Once the pandemic hit, that was put on hold.

“That Porsche went into holding all of this together. My new Porsche is Blue Corn is still open,” she said.

The demands brought on by the pandemic mean Martini-Rios rarely has free time.

Though she was awarded a $10,000 grant from the city on July 2, she was unable to use it in the way she had hoped. She wanted to use the money to build a back deck and a seating area along 9th Street, but the permits that she applied for were all denied by the city, leaving Blue Corn Cafe with insufficient COVID-safe outdoor dining options.

Instead, the money went towards the installation of HEPA air filters throughout the restaurant, personal protection equipment for the Blue Corn Cafe staff members, and to design a new online ordering platform.

“The money was well-spent,” Martini-Rios said. “But that grant did not keep me open. If (the city) thinks that’s the case they’re sorely mistaken.”

Martini-Rios is grateful for the support of Blue Corn’s customers. As vaccinations increase throughout Durham, she is eager to welcome more of them back into her restaurant.

“When people are inoculated, they can start to get out and help these small businesses get back on their feet. They are going to be such a vital part of our resurrection of this city.”

Photo at top: As the coronavirus shutdown disrupted her business, Blue Corn Cafe co-owner Danielle Martini-Rios adapted, trying to keep as many workers employed as she could. Photo by Sho Hatakeyama | The 9th Street Journal