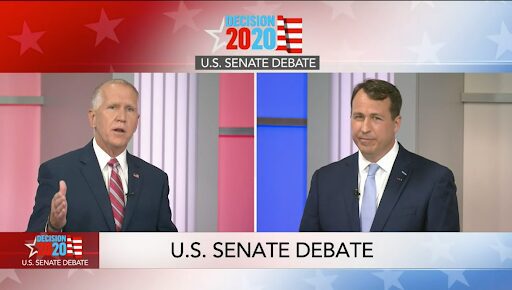 After his first question prompted a puzzling response from the Democratic nominee for U.S. Senate, the debate moderator asked a second time. Would Cal Cunningham take a coronavirus vaccine that was approved by the end of the year?

“I would be hesitant,” Cunningham said. “I’m going to ask a lot of questions.”

“We just had a candidate for the U.S. Senate look into the camera and tell 10 million North Carolinians he would be hesitant to take a vaccine,” he said, waving his hands up and down for emphasis.

It felt like a role reversal for the two parties. It’s typically the Republicans who are skeptical of scientific expertise and public health measures such as mask requirements.

But on Monday night, it was Cunningham who said it was “incumbent on every American” to question the government and Tillis who responded, “I trust Dr. Fauci,” referring to Anthony Fauci, the government’s top infectious disease doctor.

If you didn’t see it live, you will surely see it and read about it again in ads and mailings. The exchange was the most memorable moment in the first televised debate between Tillis and Cunningham, two candidates in one of the most competitive and costly Senate contests in the country.

In the hour-long debate, the candidates sparred on healthcare and systemic racism, while also repeating barbs from their campaign ads.

“I didn’t know what a butler’s pantry was because we didn’t have them in the trailers I grew up in,” Tillis said.

From the outset, the pandemic dominated the debate.

Before either candidate spoke, the debate moderator, WRAL anchor David Crabtree, explained that the candidates had been spaced 12 feet apart and had worn masks until reaching their podiums.

Asked to comment on the president’s handling of the pandemic, Tillis sidestepped. He praised the administration’s travel ban and then pivoted to boast about his efforts to increase testing and access to personal protective equipment.

Cunningham put the blame on President Trump and the federal government.

“I think that we are exceeding and experiencing an unprecedented failure of leadership in this country,” he said. “We have tens of thousands of Americans who have lost their lives, often without being able to be with their loved ones in their final hours. We’ve had millions of people out of the workforce, tons of jobs lost, but it’s also the lost moments. It’s missing high school graduations. It’s grandparents who can’t be there for birthdays, weddings, funerals.”

Cunningham also accused Tillis of dilly-dallying after being briefed on the coronavirus in January.

“It took him almost six months to come up with priorities,” he said. “Instead, I was listening to North Carolinians, talking about the priorities I hear.”

Following the pattern of the president, who has called the coronavirus the “China virus,” Tillis shifted blame overseas.

“Make no mistake about it. China’s responsible for this crisis,” he said.

And then came the surprising exchange over the COVID-19 vaccine. Cunningham defended his position, describing skepticism of government as one of the “finest traditions of America.”

“I think that’s incumbent on all of us right now in this environment with the way we’ve seen politics intervening in Washington,” he said.

“Cal’s a trial lawyer. He’s not a doctor,” Tillis replied. “He’s not a scientist. He’s not an epidemiologist. What he’s saying is what he thinks will get him elected. Because that’s what (Kamala) Harris said.”

Tillis and Cunningham are scheduled for two more debates on Sept. 22 and Oct. 1.