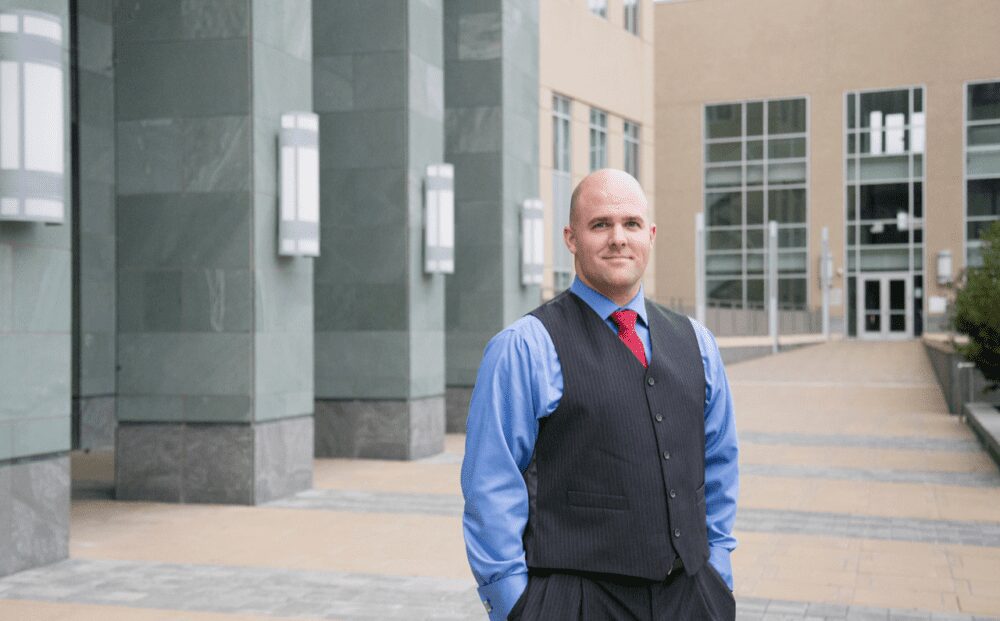 It was five days after the killing of George Floyd by Minneapolis police officers, and T. Greg Doucette was mad.

Doucette, a criminal defense and small business attorney in Durham, was angry with the way police were treating protesters: beating them, pepper-spraying them, and, in one case, even trampling them with a horse. And so, around noon on May 30, Doucette did what he often does when he wants to gripe: he tweeted, creating a thread of 10 videos showing instances of police brutality toward protesters.

His thread went viral, retweeted by Trevor Noah and John Cusack and scores of others. Twitter analytics showed it reached millions of users. Suddenly people started sending him thousands of videos of police violence, and Doucette kept adding to the thread, with a counter so people could keep track. He gained 100,000 followers (on top of his previous 30,000). Soon, the “Police Brutality Mega-Thread” had ballooned to hundreds of clips.

“It was like, holy shit, this has gone beyond what I expected,” he said in an interview with The 9th Street Journal. “And I got to figure out how to manage it.”

Doucette’s sudden Twitter fame was partly a reflection of the moment — a nation waking up to the pervasive problem of police violence — and partly a product of his Twitter addiction (he’ll often tweet 100 times a day).

But though the 100,000 Twitter followers were new, the blistering honesty of the thread was not.

Whether he’s insulting Jeff Sessions (“human gutter trash”) or skewering the UNC Board of Governors, Doucette will give you his unvarnished opinion. Since 2017, he has hosted a podcast called “#Fsck ‘Em All,” in which he rails against corruption and abuse in the justice system as well as what he calls “political f*ckery.”

Recently, he’s taken to YouTube to challenge Van Jones, a news commentator who gave a TED Talk titled “What if a U.S. presidential candidate refuses to concede after an election?” In the video, Van Jones explains how a president could exploit “legal loopholes” in the Constitution to stay in office.

“Van Jones is WRONG,” Doucette contends in his 50-minute YouTube video. It is quintessential Doucette — funny, thorough, nerdy and crass.

“There is no profanity in the presentation, but I do tend to cuss a lot,” he says, hovering at the bottom left of the screen and wearing a t-shirt from North Carolina Central University School of Law. Thirty seconds later, he calls his video “boring as shit.”

The video has attracted over 130,000 views — and some controversy. When someone in the comments section disputed one of his claims, Doucette weighed in: “Basically every comment and reply you’ve made here is wrong, it’s actually impressive! Enjoy the Biden administration.”

He’s a rascal and a reformer, a crusader for justice, or — if you’re on the receiving end of his Twitter onslaught — a pain in the neck.

Both times I interviewed Doucette, he appeared on my screen wearing black headphones and a gray shirt that said “NCCU Trial Advocacy Board” (does he only wear NCCU shirts?). Bald and 39 years old, he’s a self-described “full-time curmudgeon, part-time Twitter celebrity, occasional attorney.”

Doucette talks like he tweets: non-stop, unfiltered, his words laced with zingers and occasional f-bombs, his face lit with an impish smile.

Unlike most advocates for criminal justice reform, who come from the left, he’s a conservative, though he abandoned the Republican party after President Trump’s election in 2016 (he’s now registered as unaffiliated). His watchdog mentality reflects his skepticism about the state.

His strategy is simple. “You have to keep the government in its little box. And if it ever steps out of the box, you smack it in the face and you put it back in the box.”

Doucette grew up in Virginia Beach in a home where his mother and stepfather fought a lot.

“I grew up in the type of home many would consider ‘white trash,’” Doucette wrote on the website for his state Senate campaign in 2016. “Poor, frequent substance abuse, more frequent domestic violence (something so ‘normal’ in my life I didn’t even know it was called ‘domestic violence’ until law school).”

In high school, he was recruited by Massachusetts Institute of Technology for its computer engineering program, but he decided on attending North Carolina State University because tuition was cheaper.

Then, a setback: his parents refused to provide him with tax information, so Doucette couldn’t qualify for financial aid. He dropped out, worked odd jobs, lived out of his truck and used his girlfriend’s dorm room to shower.

When he finally got enough money to enroll, he became president of the UNC Association of Student Governments, a group that includes student representatives from schools across North Carolina, including NC State. He eventually graduated with a degree in computer science.

Doucette was fun but in a “nerdy” kind of way, said Ashley Yopp, who met him through the Association of Student Governments. At parties, instead of playing beer pong, Doucette would be deep in conversation with someone about a new idea.

In August 2009, Doucette enrolled in NCCU’s School of Law, a historically Black college in Durham. He picked NCCU because it was cheaper than UNC. After graduating, he wanted to start a nonprofit called “NC SPICE” that would be an incubator for other attorneys trying to set up their practices.

“The logo was a pepper grinder with the scales of justice, really slick, man,” he said, rummaging through his computer for a picture.

But Doucette hit a speed bump when the IRS stopped processing applications for nonprofit groups. So Doucette started his own firm “kind of by accident.” He chose Durham because of the resources and connections at NCCU. He was sworn in as an attorney in 2012. (He eventually founded the nonprofit and now works as its executive director.)

He started out focusing on business litigation and higher education law. He fell into criminal law by happenstance.

“For whatever reason,” he said, “I still had this old-school Republican notion that criminal defense lawyers are just icky creatures.”

In November 2013, Doucette took on a client who was a student at NCCU and had been caught selling weed. It became a turning point in his legal career.

During their first conversation, according to Doucette, the student said he wanted to be “Durham’s weed man.” The student had brought a business plan on how to sell weed, complete with marketing projections and a color-coded map of everywhere in the country it was legal.

“You know how you watch movies, and you hear the record-scratch moment, and everyone freezes? That’s how it was during the client interview,” Doucette recalled.

Though he thought it would be impossible to help the student receive a lenient sentence, Doucette took on the case.

In February 2014, Doucette defended the student in court by arguing that the evidence for the case be suppressed. To his surprise, the court accepted his argument and dismissed the case.

Later, in the hallway of the Durham courthouse, the client grabbed Doucette’s arm.

“Bro, you are a white Jesus,” Doucette remembers him saying. “That was a miracle. Give me your business cards. I’m going to send all of my customers to you.”

Sure enough, Doucette soon got a call. “[The student] said you’re a miracle worker. I caught a charge. I need your help,” the caller told him. The next day, Doucette got two more calls. Then, in March, on his birthday, Doucette received an email announcing someone had bought him a domain: www.durhamweedlawyer.com. The client had put his marketing skills to work.

“So it ended up, by the middle of 2015, most of the people in Durham who were selling weed in a given part of town, I was their defense attorney,” Doucette said.

To this day, many of his clients are still charged with drug-related crimes. He also represents protesters, whether from Moral Monday or Black Lives Matter — a part of his practice he describes as his “ministry.”

“I do stuff on Twitter, but I also like being in the courtroom and being able to defend people who are being oppressed by their government,” he said.

At its peak, his law firm, which is located on 311 East Main Street, had multiple attorneys, interns and a receptionist. Then, in 2016, he made a longshot bid for state Senate in a district that includes Durham County. Though he won more votes than any Republican to run for the seat and got an endorsement from INDY Week, he still lost badly to incumbent Mike Woodard.

It was an “incredibly stupid” decision, he said — and it almost bankrupted his firm.

Immersing himself in his campaign meant less time for marketing and finding new clients. His business crumpled. His attorneys left. The next year was dreadful for Doucette.

“I’ve fallen into this rat race of churning through cases at the law firm to make rent each month,” he wrote in a blog post in April 2017. “But don’t really feel like I’m moving forward toward any given objective beyond rent-paying (which is a fantastically low goal in life). It’s terribly frustrating, especially for someone who’s climbed up from how far down I was back in 2000. And the way forward is a complete mystery to me.”

Today, Doucette is the only employee at his firm. Because of the coronavirus pandemic, he works most days from home, where he lives with his wife, Jeanne Chen, an optometrist he married in October, and with his “kids”: a dog (Chance) and two cats (Biscuit and Oliver). When he goes into the office two times a week, it’s very quiet, and he keeps iTunes playing in the background.

Beneath the cocky exterior, Doucette feels for others. Since 2015, he has organized an annual fundraiser to provide groceries for underprivileged elementary school kids in Durham. This year, he raised over $55,000. Lowes lent him an 18-wheeler to transport the 3,642 bags of groceries.

“He had that truly human ability to put himself into people’s situations and to care for them as individuals,” recalled Myers-Davis, Doucette’s former attorney. “Many of his clients of the firm, even folks that I’ve worked with, have come back and said, ‘You know, I’m doing this and this because Greg gave me advice, not as my attorney, but as a person who really cared about me.’”

His strong feelings against police violence aren’t new. He says he has been sharing videos of police misconduct for the past 13 years.

“Do I hate police?” he wrote in one of his tweets. “No. I hate raging incompetent cowboys w/ badges financed by my tax money who clearly haven’t had an eye exam recently.”

Doucette has also been ranting about police misconduct on his “#Fsck ‘Em All” podcast. Like its creator, the podcast is a little geeky. “Fsck” is the name of a computer software tool for checking the consistency of a file system; Doucette describes his podcast as “your weekly consistency check on America’s political and legal filesystems.” It’s also a source of income: for $3 to $25 per month, fans can gain exclusive access to bonus episodes and “Become part of the #Fsck community!”

In his slight southern drawl, Doucette calls out cops from across the country: a North Carolina sex crimes detective who committed sex crimes, a Florida deputy who framed motorists for drug offenses, Texas cops who beat a domestic violence victim.

“He is showing that you don’t have to be Black to call out social injustice,” said Deyaska Sweatman, one of Doucette’s law school classmates. “His megaphone is loud, not just because he’s really good in the Twitterverse. But his megaphone is loud because he really, really cares. He really has been fighting this fight from the beginning.”

In photo above, Doucette in front of the Durham County courthouse. Photo courtesy of T. Greg Doucette.