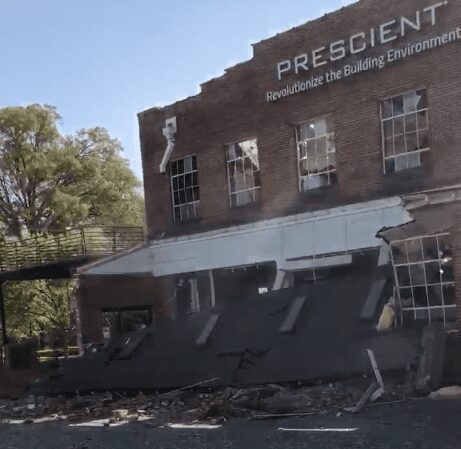 Freddy DiVallerino was trimming trees on the 100 block of North Duke Street when he heard the explosion.

“It was like a bomb,” he said. “I had my back turned, and when I looked around I saw glass and chunks of the building hitting the ground.”

One person was killed and at least 17 people, including a firefighter, were injured after a gas explosion rocked downtown Durham Wednesday morning. Residents blocks away felt the blast and wondered what happened. But for those nearby, there was no doubt that something enormous and lethal had just occurred.

DiVallerino owns Freddy’s Tree Services. His staff was working on the landscaping in front of the Ingram Collection, a private museum of Porsches, right before the explosion.

Video of the immediate aftermath of the Durham gas line explosion Wednesday, shot by Freddy DiVallerino. Graphic language included. Used by permission. (Click here if you have trouble viewing.)

He said he began to smell gas around 9:30 am and told a nearby employee to call 911 and the gas company. Members of the Durham Fire Department, dispatched at 9:38, arrived quickly and evacuated people from businesses on the block.

DiVallerino was standing in the parking lot outside the Ingram Collection at 111 North Duke St. when the blast struck at 10:07 am.

“I was screaming, cussing,” he said. “But I knew I had to look for people, because someone might still be in there.”

DiVallerino said he jumped through the window of Prescient, a construction company at 115 North Duke St., in the worst-hit building. “The walls were collapsed, the ceiling was collapsed,” he said. “I went to the second floor and yelled for any survivors, but I didn’t hear anything back. Then I knew I had to get out of there.”

A few minutes later, tall flames roared from the roof of the building, which quickly collapsed.

Casey McCollough, an inspector for the NC Department of Transportation, said he was waiting for co-workers in his truck a block from the blast.

“I heard the loudest explosion I’ve ever heard in my life,” McCollough said. “Then I see a man running down the sidewalk. His face was full of glass, his back and arms had glass in them, and his hair was completely burnt off,” he said.

“He was just walking past the sidewalk when the explosion happened,” said McCollough, who said he took out his first aid kit from his truck and waited for an ambulance to help the man.

The cause of the blast is under investigation. Durham police spokesman Wil Glenn Wednesday morning said it appeared that a construction worker damaged a gas line. “The gas leak was caused by a contractor drilling under the sidewalk. He hit a two-inch gas line,” Glenn said.

Ethan Stansbury, a Duke University junior, said he was across the street in his West Village apartment when he felt the blast.

“I thought a truck had crashed into the side of our building,” he said. “The windows of our apartment blew inwards, so there’s glass all over. It knocked stuff off our walls, too.”

When Stansbury went outside, he saw chaos. “People were crying, and there was glass and debris in the streets three blocks away. There were broken windows everywhere, and water leaking from pipes in the parking deck two blocks over.”

This is not what city officials were expecting today, the 150th anniversary of Durham’s founding.

“It’s also a day that I feel a lot of gratitude and pride for the way the employees of the city and county have responded,” he said.

(Alex Johnson contributed to this article)

Photo at top from video shot by Freddy DeVallerino. Used by permission.