Home » The life cycle of a sexual assault evidence kit 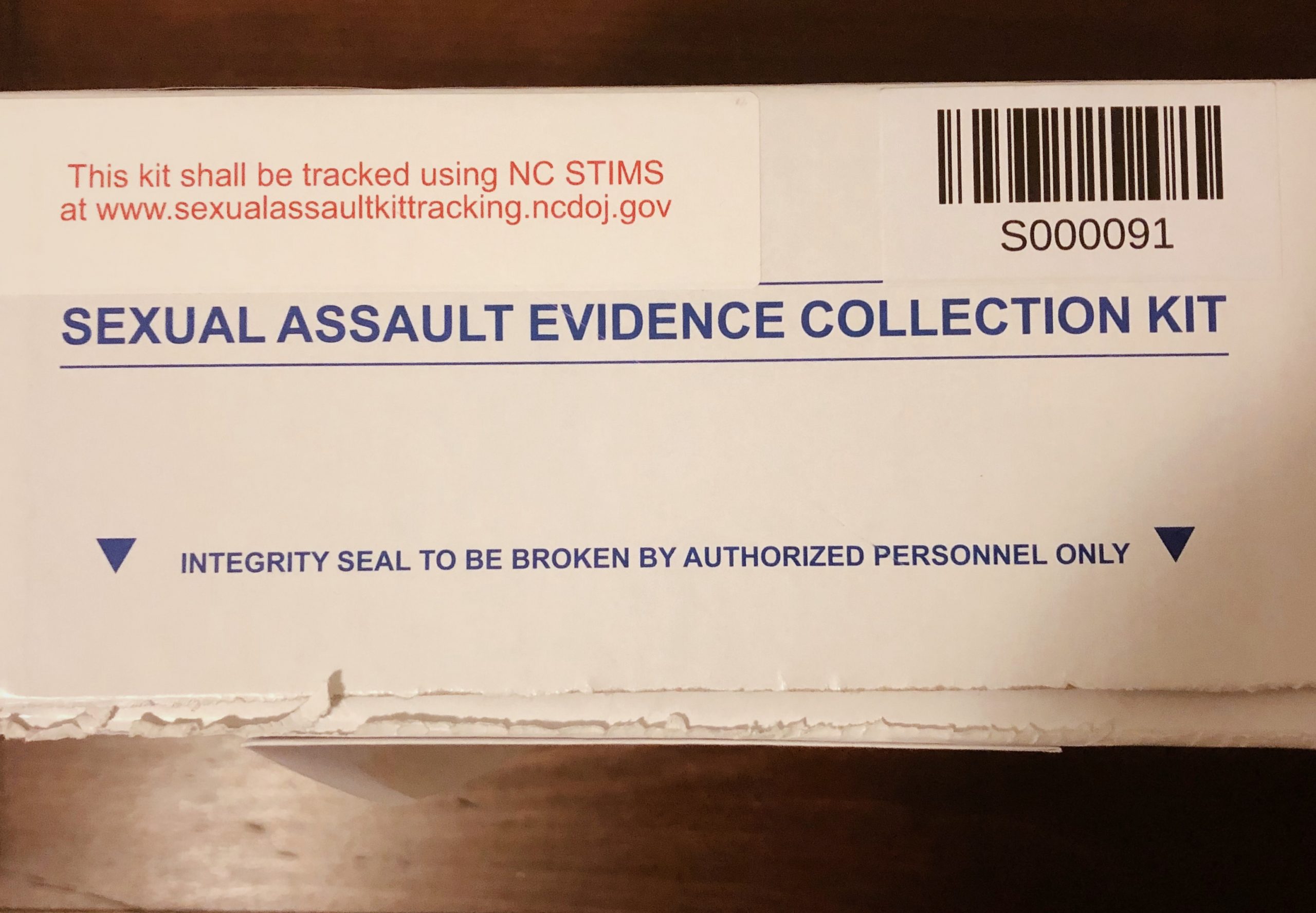 The life cycle of a sexual assault evidence kit

It starts when the emergency room door opens.

A victim walks in. She may have been sexually assaulted an hour ago or a day ago, but now, she’s decided to see a doctor. She might walk in with a friend or a parent, or she might sit alone and wait for the sexual assault nurse examiner to arrive.

“I just introduce myself at the beginning,” says Molly Chadbourne, a former sexual assault nurse examiner in Durham who currently trains other nurses. “I explain who I am and why I’m there to talk with them. Then, I ask them what they want. Do they want a kit?”

This is where a sexual assault kit begins. Its life cycle may last months, or even years.

The nurse ushers the victim into a small hospital room where they have privacy. Chadbourne likes to start with the easier questions: “What’s your medical history? What types of medicine do you take?” Then, she’ll ask the harder question. “Can you tell me what happened to you?”

The nurse listens, letting the victim take breaks and reminding her that it’s okay to tell her story imperfectly.

“We know that some people aren’t going to remember everything right away, and they might not remember it linearly,” Chadbourne says. “We have to give people permission to start talking about whatever they can, even if it’s not at the beginning.”

Then, the nurse starts to assemble the kit, a small white cardboard box with “Sexual Assault Evidence Collection Kit” printed on the front.

The nurse starts collecting “known” samples, or the victim’s DNA. She’ll gently swab around the victim’s cheeks, gums, and lips. She’ll ask the victim to take off her underwear and seal it in a bag labeled “Underpants”. She’ll pluck exactly 50 hairs out of the victim’s head and then comb through her pubic hair, securing any hairs that fall off into a small envelope.

Then the nurse collects “unknown” samples, which could include the assailant’s DNA. The nurse will swab any place on the body where the victim says she was assaulted. “It’s anywhere that was licked, bit, or touched by the assailant,” Chadbourne says.

She says “anything that’s on their body might be relevant”. Victims and nurses alike understand that the victim’s body is a crime scene.

The nurse takes photos of the woman, documenting any cuts, scrapes, or bruises. “I offer to let people look at the pictures,” Chadbourne says. “I try to give them as much control over the process as possible.” At any point, she notes, a victim can stop the kit collection.

After two hours, the nurse has packed away dozens of cotton swabs, photographs of injuries, and envelopes of hair into the sexual assault kit. She closes the lid of the white cardboard box and places it in storage, where the kit waits for law enforcement to come pick it up the next morning.

When the kit arrives at the police department, an officer will take a first look. That officer might notice if the kit is connected to a consent case, a case in which the victim and the perpetrator both agree that they had sex, but disagree on whether it was consensual. Three years ago, a consent kit would get put back on the evidence shelves at the police department instead of getting tested. It could stay there for over 30 years.

“When I was seeing patients, I couldn’t say to them, ‘Your kit will never get tested, because you know the person that assaulted you,’” Chadbourne says. “Doing this really invasive process and knowing in the back of your mind that this kit will probably never be tested… it’s a really hard pill to swallow.”

“We place the kit into a vault until it’s time to be worked,” says Jody West, forensic sciences manager at the State Crime Lab. “Then we open it up, and start with inventory.”

Every sexual assault kit is a little different — “It’s a box, but it’s not a one-size-fits-all box,” according to Chadbourne — and the State Crime Lab takes note of every swab, photo, and hair inside.

A lab technician first takes a tiny portion of the swab and uses a chemical to tease out the DNA from its cotton. “It’s like cracking open an egg and removing the yolk,” West explains.

Lab technicians then use a machine to separate the yolk — human DNA — from any other type of genetic material. In sexual assault cases, they’re usually looking for male DNA. “This is the decision point,” West says. “If we determine there’s not enough male DNA, we’ll stop.”

If the kit moves ahead, it goes through amplification, or copying the yolk. The assailant’s DNA fragments are heated and cycled through a hefty gray machine — in just thirty cycles, a billion copies of that DNA are made.

The last step is electrophoresis, or separating the yolk. Analysts use an electric field to detach different fragments of DNA. The result is a complete DNA profile. “It looks a lot like a heartbeat,” West says.

After hours in the emergency room, days with law enforcement and up to five weeks at the lab, this is what a completed sexual assault kit looks like: A series of peaks on a computer screen.

Those peaks — the DNA profile of the assailant — will be entered into a database of millions of offenders across the country. A computer will scan each offender’s profile, checking for a perfect match. If the all of the peaks line up, the computer spits out a name. Then, it’s up to the police to investigate the sexual assault.

That is the life cycle of one sexual assault kit. To clear the backlog of 15,160, North Carolina has thousands more to go.

“Most people, if they’ve ever heard of a rape kit before, it’s from watching Law and Order SVU,” Chadbourne says. “They think it gets solved in 60 minutes. The truth is, it doesn’t. It really doesn’t.”