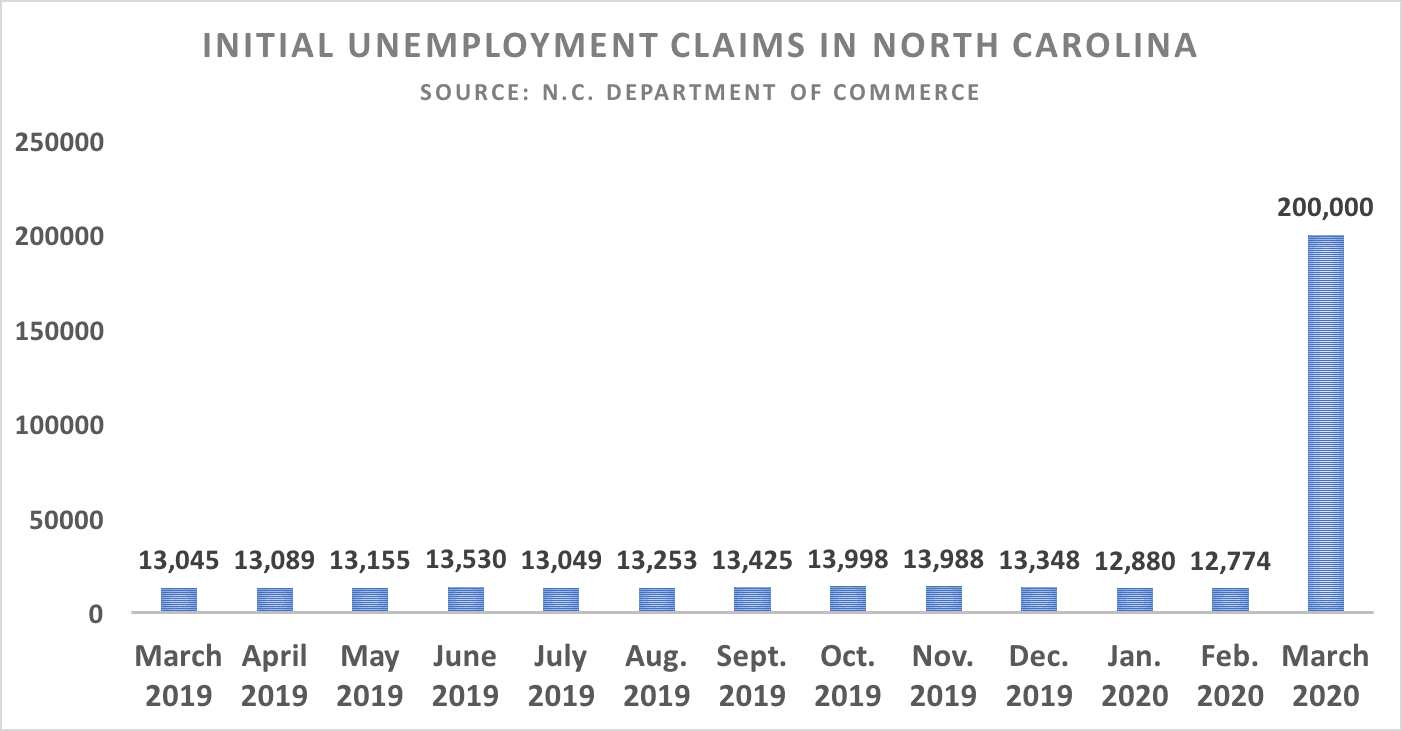 Now that state and local government orders have shuttered restaurants, bars, gyms and many other businesses, the ranks of people laid off in North Carolina keeps swelling.

Gov. Roy Cooper has made moves to simplify signing up for unemployment benefits. But people trying to get that job done say glitches with a state website can make it tough to get started.

Alexis Graves waited tables at Durham’s celebrated Italian restaurant Gocciolina before she was let go on March 17. Though Gocciolina remains open for take-out, without floor service, Graves and all other waiters are out of work.

When Graves got word of the layoffs from her manager, she immediately started filing for unemployment, a process that can be done online. She logged into the state website around 3:30 p.m, she said.

“I sat down and started trying,” Graves said. “It was so slow, and then things started timing out.”

Graves finally gave up and restarted her application later in the evening. She was able to finish around 1 a.m., she said.

“It was seriously glitchy,” Graves said. “The website doesn’t function well, even in the best of times. But right now, it’s frightening.”

Almost 220,000 North Carolinians filed for unemployment between March 16 and 26, according to Larry Parker, spokesperson for the Division of Employment Security. That’s 60,000 more than all the unemployment claims filed in North Carolina throughout 2019.

The Division of Employment Security recently posted 50 new jobs it will fill to handle the influx of claims, Parker said. One listing, for a call center representative at the division, notes that applicants can expect to take around 60-80 calls per day.

But calling to file an unemployment claim can be even slower than filing online, according to some people recently made jobless.

Ashley Zepeda was laid off from her job as a bartender at Raleigh’s Bartaco on Monday. When she tried to file for unemployment online, the website kept crashing, she said. So, she tried calling the department.

“I got an automated message,” Zepeda said. “It’s a lady who says, ‘I’m sorry, there’s too many people calling. Try again later, goodbye.’ Then it hangs up on you.”

Complaints about the situation are showing up on social media, including posts on Durham’s Reddit thread. People across North Carolina have reported a glitchy unemployment website and long wait times on the phone.

The Division of Employment Security acknowledges the issues with their phone lines, writing online “our customer call center is experiencing high call volume” and urging people to use their online system to avoid waiting on hold.

“We had some initial web issues last week but upgraded our server capacity and that has helped tremendously,” wrote Parker in an email. “We are asking that people make sure they walk through the process — not run.”

Last week, North Carolina House Speaker Tim Moore created a remote legislative committee to address the impacts of coronavirus. That group drafted a bill, named the COVID-19 Response Act, to finalize the changes the governor had already made to unemployment benefits.

Those changes include removing the one-week waiting period, giving employers tax credits for paying into unemployment funds, and allowing employees with reduced work hours to apply for benefits. The committee meets again next Tuesday.

After Graves finished her unemployment application online, she waited four days for confirmation that it had been received. A week later, she found her weekly award amount lacking, she said.

As a waitress, Graves’ benefits are based only on her hourly wage, not including tips. That makes her award amount lower than it should be if it included her true income, she said.

“I’m trying to decide whether to dispute it,” Graves said. “But I probably won’t. It’ll just make the whole thing take longer.”

She said she doesn’t want to try using the website again or calling the Division of Employment Security.

“I’d rather just have something, even if it’s barely enough to live on,” she said.

Graves had some words of advice for anyone trying to apply for unemployment benefits in the coming weeks.

“Don’t try to call them. Don’t try to do it through mail. Don’t use your browser’s back button,” she warned. “And make sure everything you put in the first time is accurate, because if you have to edit something, it probably won’t work.”