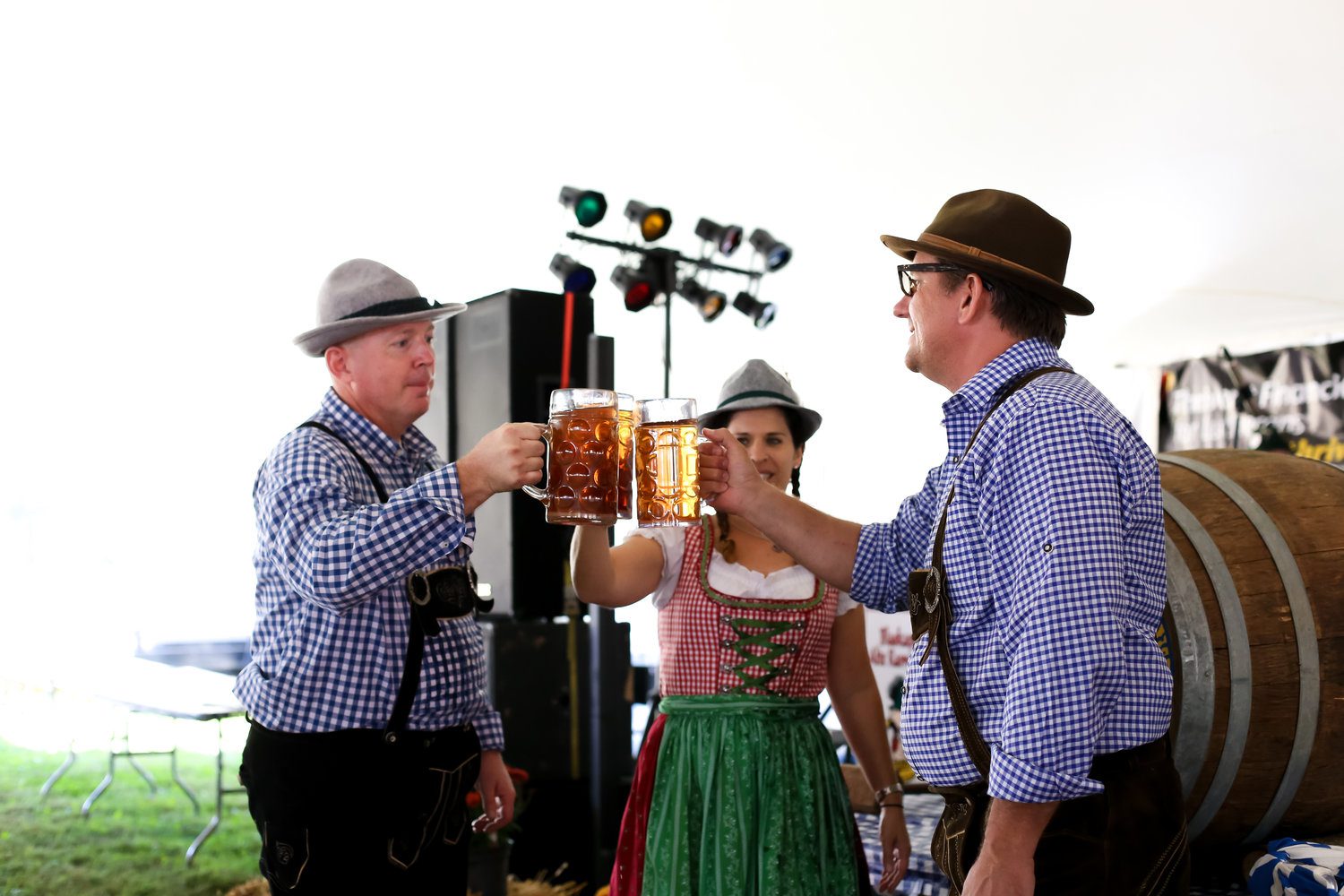 Before he left Lovettsville, Va., incoming Durham Fire Chief Robert Zoldos had to reassure his townspeople that he wouldn’t abandon his most important duty.

“I promised to come back every year to emcee the wiener dogs,” Zoldos said.

The wiener dog races are the highlight of Lovettsville’s annual Oktoberfest, when dachshunds dash down a lane of grass while the town of 2,300 cheers them on. Zoldos stands between the crowd and the race track, dressed in a traditional Lederhosen costume and a German alpine hat. His strong voice booms through a microphone, imploring the crowd to root for Lucy, Red and other dogs as they waddle across the finish line.

This is just one municipal duty for a small-town mayor like Zoldos, a stocky, muscular firefighter who stepped down from his government post this summer after three terms and six years as the face of his hometown.

One of his final acts as mayor was to temporarily rename the town Capitalsville when the NHL’s Washington Capitals were in the Stanley Cup Finals against the Vegas Golden Knights. His proudest accomplishment? Getting sidewalks built in downtown Lovettsville after “hemming and hawing over that for decades.” That’s harder than you think when the roads were built for horses in the 19th century.

When Zoldos announced on the town of Lovettsville’s Facebook page that he was moving to Durham, more than 60 commenters congratulated him and lamented his departure. All it takes is a call to the city clerk’s office, and it quickly becomes clear that everybody knows and loves Zoldos.

“He’s hard to describe, kind of larger than life. He’s a great leader,” Assistant Town Manager Harriet West said. “There’s nothing that can’t be done in his book.”

Zoldos already sounds wistful talking about Lovettsville. He’s lived in the Northern Virginia area all his life and only briefly left for college at Penn State 30 years ago. But at age 49, it is as if he is leaving home for the first time.

Outside Lovettsville, the mayor is Deputy Chief Zoldos, a career firefighter who has been an eyewitness to death and destruction. In a quarter-century rising through the ranks of the renowned Fairfax County Fire and Rescue Department, he got a first-hand look at natural disasters and other mayhem around the globe.

Zoldos was a rescue squad officer at the Pentagon on Sept. 11, 2001, and is the former commander of Virginia Task Force 1, the Fairfax search and rescue team that is one of the only two in the country certified for international deployment. In that role, Zoldos went on missions to Haiti, Japan, Kenya, Turkey, Taiwan and Iran.

The 2010 Haiti earthquake that killed at least tens of thousands of people left the most lasting impression on him, and he still has to separate himself from the scene when he describes it, avoiding the first person.

“You’re holding someone’s hand who’s alive, and you end up not being able to rescue them. That was a new concept for our team,” Zoldos said. “You build up a little bit of understanding of I can’t save all 200 or 300,000 that probably perish in that, but I definitely can make a difference in 10, 20, 30 or 40. As long as you can compartmentalize it a little bit, you have the ability to keep your focus.”

Zoldos says he helped some of his rescuers find help and manage symptoms of post-traumatic stress disorder. But if he has struggled personally, it hasn’t been apparent in his work in Lovettsville.

“I’ve never really seen anything at the local level that got him flustered or upset him, and my guess is even though I’ve never talked to him directly about it, is that he’s probably seen some of the worst things in humanity,” West said. “I can only surmise that that contributes to all the good things that he’s done here and his attitude and his energy.”

Zoldos was born in 1969, the year his father, Robert Zoldos Sr., began his career as a firefighter with the Leesburg Volunteer Fire Company. His father eventually became the fire chief in Leesburg, about 15 miles south of Lovettsville and 40 miles northeast of Washington, and he also served on the town council for eight years. His day job was as an air traffic controller at Dulles International Airport.

Zoldos didn’t seriously consider following in those firefighting footsteps until he enrolled at Penn State and served as a student emergency medical technician. He got a bachelor’s degree in behavioral and social sciences, and then earned a master’s degree in public administration at George Mason University a few years into his career in Fairfax.

Few things about Zoldos’ life have been carefully calculated. He respected his dad as a firefighter, so the fire department seemed like a good place to start, though he was far more educated with a college degree than most firefighters.

He found it exciting and “more fun than a real job…I really took to it and it’s been a dream job for the last 25 years.”

Meanwhile, he felt the pull to serve in Lovettsville. But here, too, there was no master plan.  When there was nobody running for an open town council seat, he decided to run. He didn’t expect his involvement in local government to go beyond that, but after 14 years on the council, the retiring mayor asked him to step up.

“While I don’t covet the title of mayor,” Zoldos said in a statement announcing his first run for mayor in 2012. “I feel the same need that many of you have expressed during the past 11 days, that we must keep politics out of our Lovettsville and keep the ‘love’ in it.”

He beat his opponent 222-204, and won his next two terms uncontested.

All his career, Zoldos had been comfortable in northern Virginia. But this year, now that he and his wife were empty nesters, he decided to apply to be fire chief in Durham.

It was time to look for a chance to lead a fire department of his own, and he and his wife remembered visiting Durham four or five years ago and being amazed at its lively downtown. Zoldos applied and was hired from a pool of six finalists, and he will start work on Nov. 13.

“In terms of his role as an assistant fire chief in Fairfax, certainly leading a number of very prominent search and rescue missions in Haiti and some of his other responsibilities, we just felt like he was the best candidate,” Durham City Manager Tom Bonfield said.

Although Durham’s fire department is less than a quarter of the size of Fairfax County’s, Zoldos sees similarities between the two, calling Durham an “all-hazard department” that emphasizes urban search and rescue as well. Durham firefighters don’t just do the obvious — put out fires — but also help people escape other dangers, like when they used boats to evacuate residents to dry land during Hurricane Florence in September.

That’s about where the similarities between his new and old worlds end. Zoldos is proud of the town square in Lovettsville, but admits it’s “nowhere near as fun” as downtown Durham, where he will live in the Old Bull apartment complex in the American Tobacco District.

“Durham just hit us,” Zoldos said. “I’m looking forward to coming to a department that is big enough to make a major difference, but small enough where we can make changes, where we can turn the ship pretty fast, unlike a place like Fairfax.”

Leaving a monolithic department also means leaving his small-town rural life behind. Zoldos said he’ll miss striking up conversations at the gas station and knowing every face he sees, but in the same breath, he becomes excited about going to baseball games and plays across the street from his apartment in Durham.

His words sound like an energized young adult moving to a city for the first time after college, not a middle-aged man uprooting himself from the only region he’s ever known. But for the first time, the push to a new challenge outweighed the comfortable pull of home.

Photos courtesy of the Town of Lovettsville.