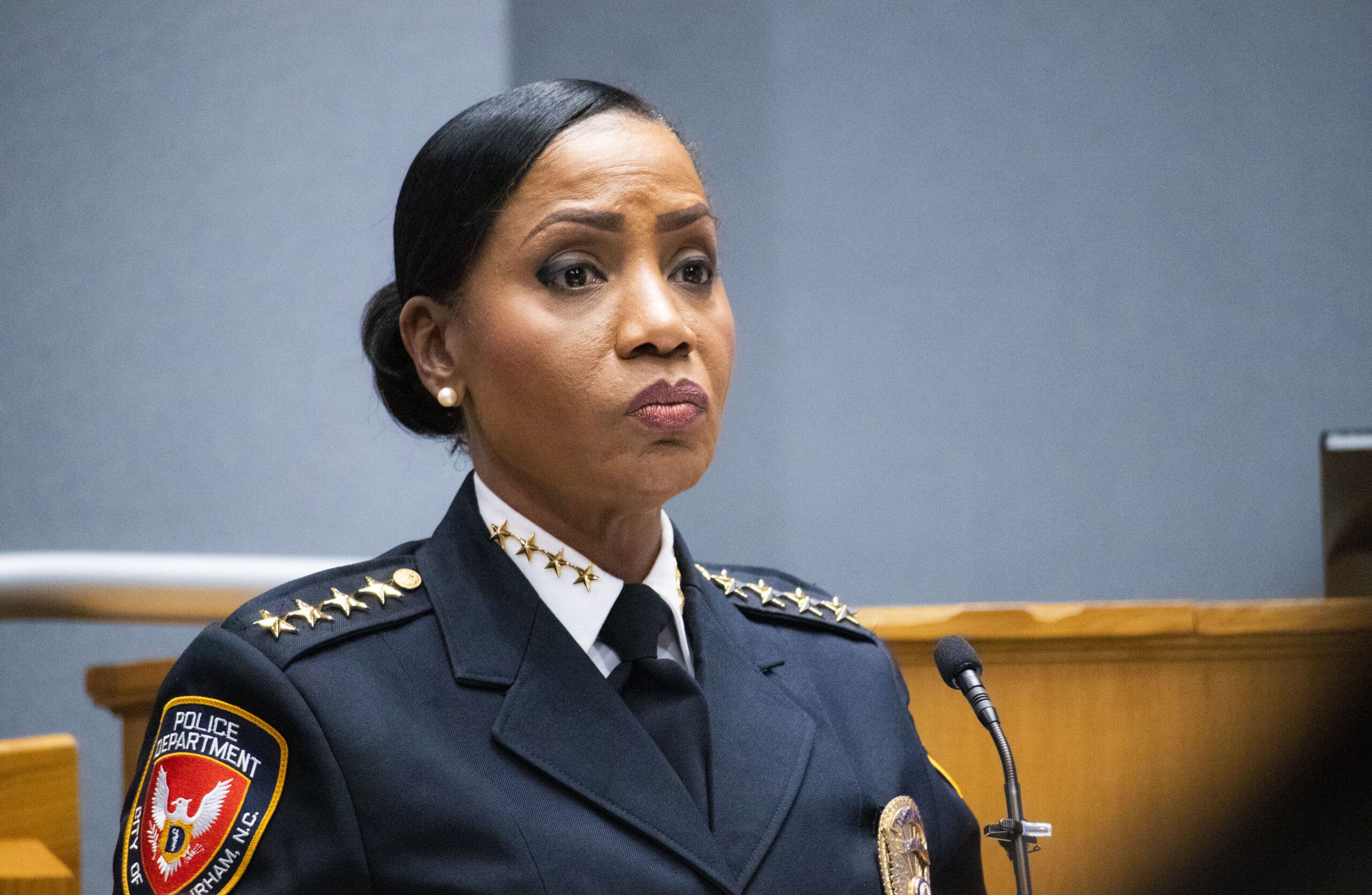 Durham police chief brings hope back to department, though change is taking time

When Durham Police Chief Cerelyn “C.J.” Davis stood before the City Council for the first time in May 2016, she introduced her plan to revamp a police department in turmoil.

Davis vowed to address the “alarming increase in violent crime” that rattled the city in 2015 and 2016, and she promised to immediately begin rebuilding strong relationships with community and business leaders.

Thirty months later, Davis has delivered on most of her promises, particularly on limiting violent crime. She has also appointed liaison officers and cooperated with Durham’s Misdemeanor Diversion Program, which helps decriminalize first-time minor drug offenses, but racial disparities in traffic stops and searches are still concerning for minority groups in Durham.

Davis took charge of a department on its heels when she began her job on June 6, 2016 after serving as a deputy chief in the Atlanta Police Department.

There were 37 homicides in Durham in 2015 under “won’t-be-missed Jose Lopez,” as longtime former News & Observer columnist Barry Saunders labeled the former chief. Lopez was forced to resign at the end of that year, but homicides kept increasing to 42 in 2016, the most since at least 1980.

That trend immediately stopped in Davis’ first full year as police chief, as homicides were cut in half to 21. Overall violent crime remained relatively flat in 2017, but it was down 17 percent through three quarters in 2018.

“I give her a huge amount of credit, and not only is violent crime down 17 percent, but crime with a gun is down 26 percent,” Durham Mayor Steve Schewel said. “We are in a very sweet spot right now. We are reducing violent crime at the same time as we’re increasing the trust within the community.”

Council member Charlie Reece noted that the drop in violent crime is particularly impressive in a city with a rising population like Durham. But the population growth could also work in Durham’s favor — many newcomers are wealthier than previous residents and are gentrifying downtown apartment complexes and condos.

Some of the violent crime seems to have moved to poorer surrounding areas, where crime rates have grown in the last two years, though Davis insisted her department deserves credit for catching and imprisoning repeat offenders.

“It didn’t just happen. We moved some staff around, more visible, paying really close attention to hot-spot areas and being laser-focused at individuals committing violent crime and catching up with them,” Davis said after her third-quarter crime report at a City Council meeting last month. “That’s what it really takes is for us to look at the few people that are committing the most violent crimes.”

More lenient, but far from perfect

Questions about racial profiling linger. A March 2016 report by the independent research firm RTI International found that the odds of a male driver stopped by police being black were 20 percent higher during the day — when officers can more easily determine drivers’ races — than at night in Durham between 2010 and 2015. The report did not find similar disproportionate treatment of black drivers in Raleigh, Greensboro or Fayetteville.

The RTI report confirmed what community leaders in Durham had long suspected, providing data to support concerns of racial profiling. A month after it went public, the Durham Police Department took its first major step in repairing its image by hiring its first-ever African-American woman chief.

“Anecdotally, the people with whom I’ve spoken, they feel that it’s easier to ride around now without getting hassled by the cops, because I think that’s pretty much what led Lopez to being ousted,” Saunders said in an interview with The 9th Street Journal. “At least I think people are optimistic now, which I don’t think they ever were under Lopez.”

Davis appears to have addressed the outcry over racial profiling on the roads by deemphasizing traffic stops altogether. Durham police conducted 44.2 percent fewer stops in 2017 than in 2015, representing a sharp drop from 20,780 to 11,587 in just two years.

“It’s just about shifting the culture for all of us to be involved in community engagement,” Davis said. “If it’s just introducing yourself, if it’s just giving a person an opportunity to speed one time and just get a warning, it works. It helps people to think twice the next time they’re lead-footed.”

Fewer stops doesn’t mean racial profiling has been solved, though. In 2017, 58 percent of drivers stopped were black, more than their 41 percent share of Durham’s population. Once drivers have been stopped, they are also far more likely to be searched if they are black — 79.9 percent of searches in 2017 were conducted on black drivers.

“I didn’t expect her to come in and work miracles in that regard. I think most people are willing to give her time because they realize it wasn’t just about one bad officer. Durham has some of the greatest police officers I’ve ever met, and they’ve also got some assholes too,” Saunders said. “Institutional change isn’t going to occur just because you change the leadership. She’s got to get her opinion and her thoughts to the rank-and-file officers.”

Schewel said Davis has appointed community liaison officers for veterans, Hispanic people, the LGBTQ community and low-income areas in Northeast Central Durham. Those officers have built better relationships with people who were previously wary of the police. He also commended her for doing away with random traffic checkpoints last year, which often got undocumented drivers tangled up in the immigration system.

Schewel praised Davis most for improving relationships with African-Americans in Durham with her changes in drug enforcement. He noted that drug arrests were cut in half last year from 1,200 to 600, with marijuana possession accounting for most of that reduction.

“Instead of arresting people, they’re referred to the misdemeanor diversion court where they’re given community service or treatment or whatever it is that they need,” Schewel said. “They don’t get a criminal record, which is really important, especially for a young person starting a career.”