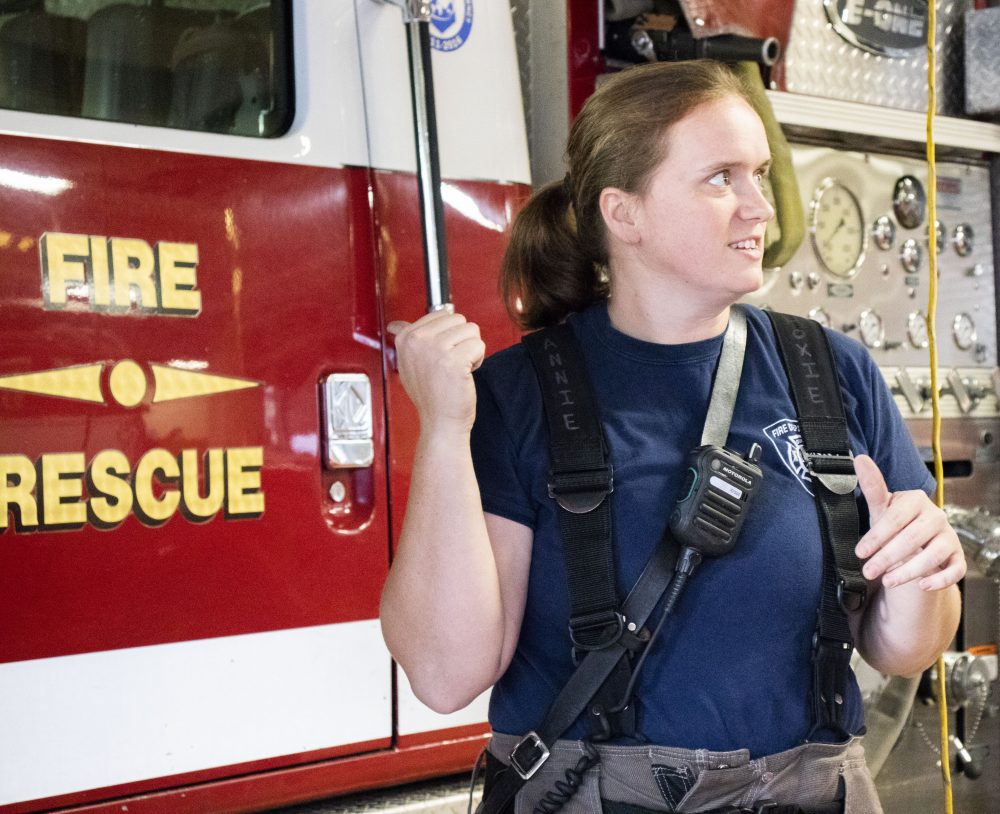 At Fire Station 1, Annie Hoxie starts her engine and follows a family tradition

When Annie Hoxie tried to start one of the Durham Fire Department’s old reserve trucks to drive her crew to Harris Teeter while Engine No. 1 needed repairs, the truck beeped angrily.

From the back seat, veteran firefighter Richard Chavis offered her a clue and urged her to troubleshoot. “Why won’t it go, Hoxie?” he asked like a parent quizzing a teen with a learner’s permit. “Hoxie, slow down. How do the air brakes work?”

Hoxie hesitated, which prompted a brief lesson from Chavis on compressed air and storage tanks. After she adjusted a dial in front of her, she got the the truck to roll out of Fire Station 1 in downtown Durham, bound for Harris Teeter to buy dinner for the rest of the shift.

Hoxie, 28, has been a firefighter for two and a half years and wants to move up: relief driver, driver, captain and then battalion chief.

That was the highest rank her father, Craig Hoxie, achieved before retiring from the Durham Fire Department. She doesn’t want to go any higher than he did — that would mean an office job, which is not her thing. But she’s found she enjoys the family business, so to speak.

Times have changed. There weren’t any women firefighters when her father started his career. And today, they make up less than 5 percent of Durham firefighters, and there are no women at the rank of battalion chief or above.

“People aren’t sure what to call me. They’re like, ‘firelady?’” Hoxie said. “’Firefighter’ is fine. I don’t even get offended by ‘fireman.’ Some women do, though.”

She is the only woman on the A Shift at Fire Station 1, part of the team on the engine along with Chavis and Capt. David Triplett. A smaller squad truck at the station responds to emergency calls calls. The teams work together closely, cleaning the station every day and alternating which group buys and cooks dinner.

As she hopped out of the truck with Chavis and Triplett, she said some people assume she’s just their driver. That’s often a challenge being a woman: She has to prove herself among her male peers.

“Biology is against us,” Hoxie said, noting that men are generally more muscular. “But if they can just throw the ladder right up there, I can find a technique to get around that deficiency or whatever you want to call it.”

Hoxie settled on firefighting later than many who enter the academy right out of high school. She earned a bachelor’s degree at North Greenville University and a master’s degree in archaeology in England before deciding to return home and give her father’s profession a shot. The education wasn’t a waste — now she won’t have to go back to school to earn a higher rank, while others take years of online classes before they can become chiefs.

Chavis and Triplett don’t give Hoxie any special treatment behind the wheel. They play the role of good-humored mentors, feigning panic on every turn that she might hit the curb.

Hoxie blends well with the team, trading barbs throughout the ride. She has little choice but to assimilate to what she calls the “brotherhood,” spending five 24-hour shifts in each nine-day work cycle surrounded by men. But she still talks about the rewards of the job and the relief on fire victims’ faces when she arrives at an emergency differently than her more unemotional colleagues.

“I feel connected to people, especially on EMS scenes. I have that compassionate side,” Hoxie said. “I still have the girl in me.”

Last Tuesday morning, the team was starting the first shift of a new cycle after a regular six-day break, and Hoxie bemoaned the fake eyelashes she had to wear that tickled her eyes at a family wedding over the weekend. None of the men in the circle could relate.