Home » Finding humor and humanity in “Life in Quarantine” 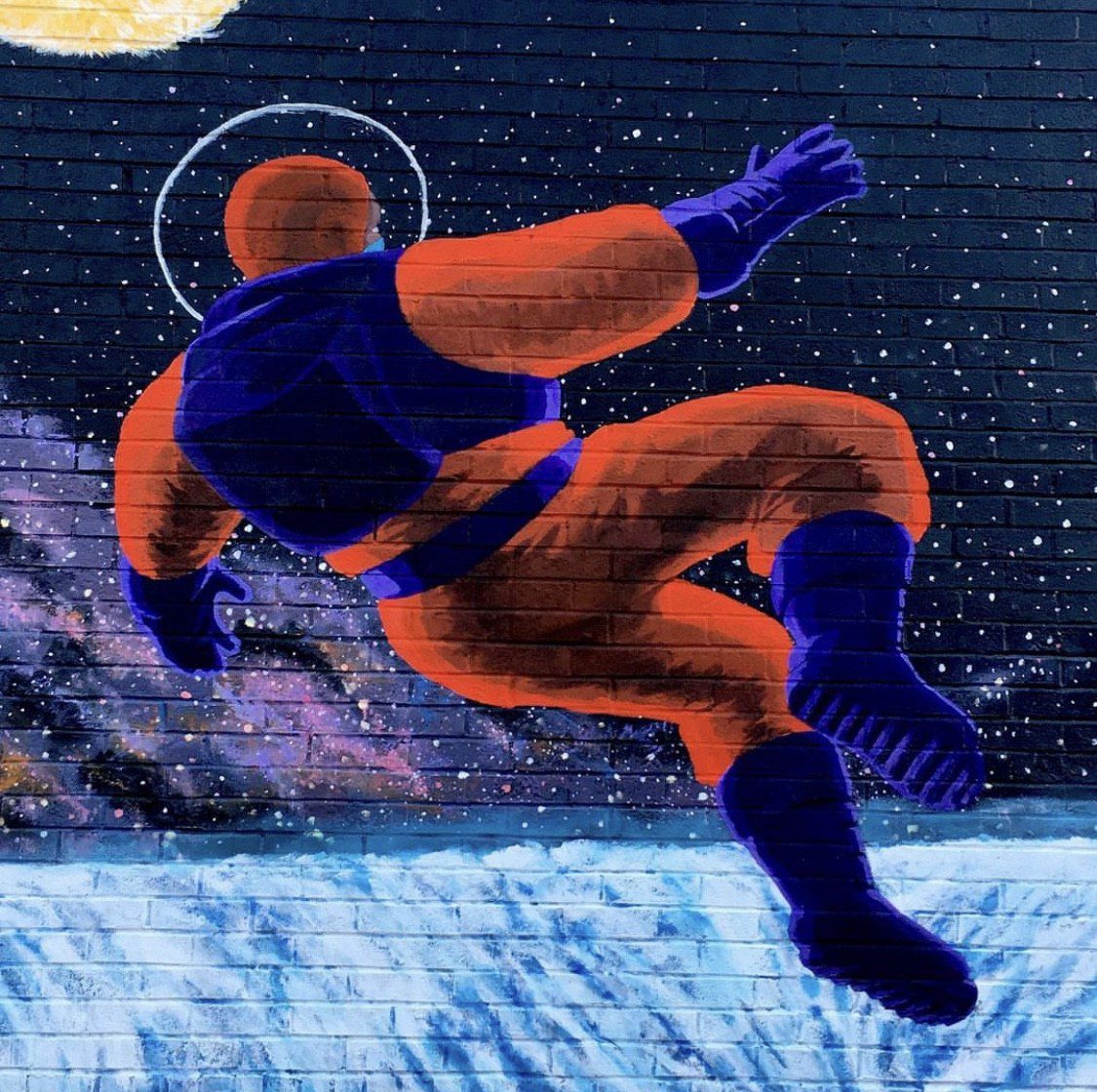 Finding humor and humanity in “Life in Quarantine”

At 618 Foster Street, around the corner from Motorco Music Hall,  stands a brick building whose side is covered with a scene straight out of a ’50s sci-fi novel. While much pandemic art seems resoundingly out of touch, this mural, aptly titled “Life in Quarantine,” gives a relatable and refreshing take on Durhamites’ experiences in quarantine, from an unlikely source.

Just around the corner is Geer Street Garden, where the mural’s creators work: Mark Cunningham, 55, and Bryan Crabtree, 37, both student-artists-turned-bartenders.

The piece is what Cunningham calls a “micro-macro mural.” The macro: astronauts floating around space with masks on, passing by the earth, moon and sun. The micro: a spaceship filled with rooms depicting familiar scenes you have to stand close to see — grocery stores with empty toilet paper aisles, closed restaurants with chairs on tops of tables, apartments with people trying to pass the time. 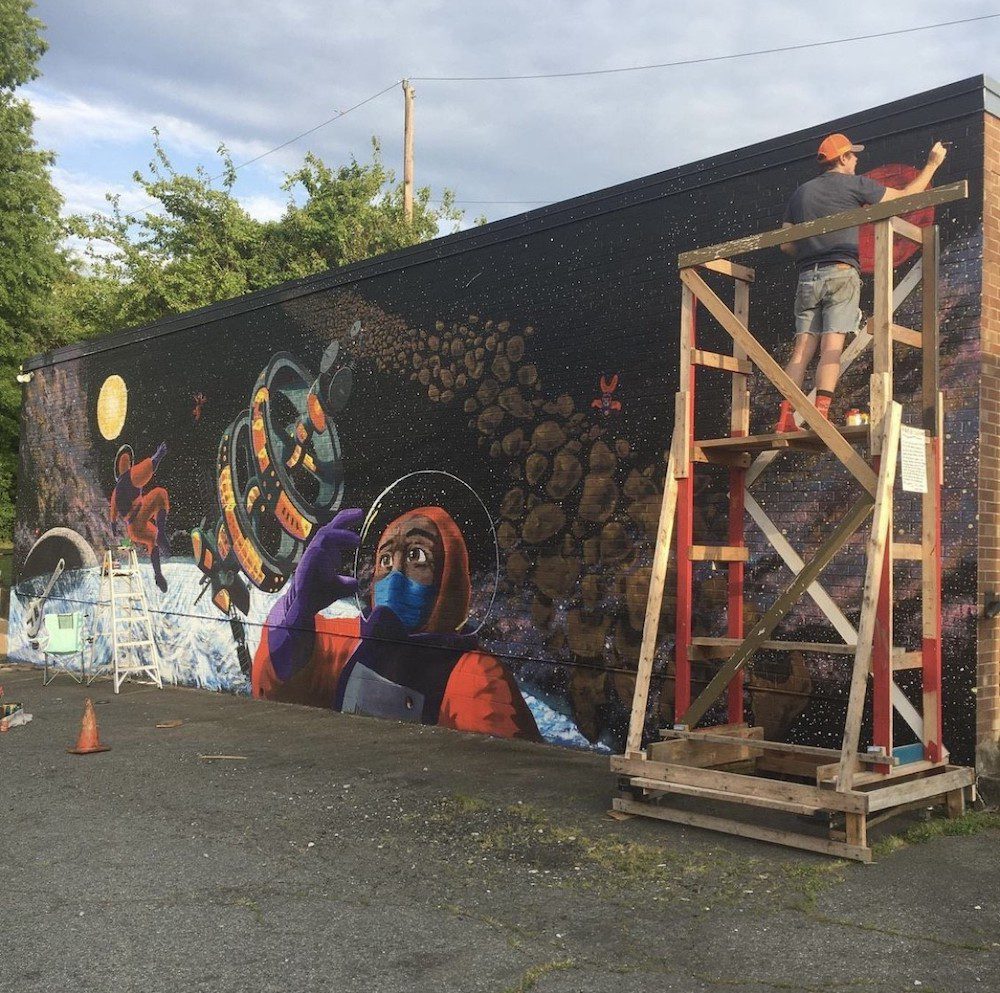 When the pandemic hit in early 2020, Cunningham was out of work and spent much of his free time painting portraits. One portrait was of Laurence Tilley whose family owns the building at 618 Foster Street. “He’s one of the most beautiful men you’ve ever looked at,” Cunningham says. “He’s gorgeous.” Tilley loved the portrait and invited Cunningham to paint what would be his first mural.

While brainstorming, Cunningham says he tried not to let its public location deter him from “painting something that is kick-ass.” The space theme came from something he and his wife used to say — that living in quarantine and seeing the same few people every day was like living on a spaceship. “I was trying to make a statement about how we feel, being cooped up. What’s more cooped up than an astronaut?”

After he came up with the initial concept, Cunningham kicked around ideas with Crabtree while they worked behind the bar at Geer Street. When it came time to execute the design, it felt only natural that Crabtree should join as his partner.

“It was interesting with our first collaboration together being something that’s 45 feet [wide],” Crabtree says. “By the end of it we really hit a stride in knowing exactly how each other worked, and when to jump in and when to get out of the way.” 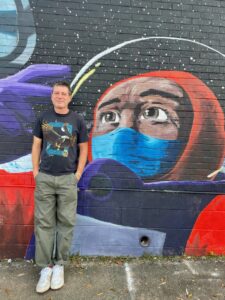 “We get along way better as muralists than we do as bartenders,” Cunningham says, laughing.

Even with both artists working together, the mural took five months to complete, from the start of work in December 2020 to the grand opening in May 2021.

Cunningham enlisted the help of his two teenage daughters in priming the wall. He and Crabtree drew on the wall with sidewalk chalk, using an overhead projector to trace the space station and free-handing the rest.

Then they painted for months. A carpenter friend built scaffolding (which Cunningham calls “very scary”) to reach the high parts. Cunningham says he and Crabtree even worked on the same astronaut’s face at the same time. “We’re almost like one organism … really, really, really good synergy.”

Cunningham calls the astronaut in the foreground the “androgynaut.” The figure’s lack of race or gender signifies universality. The space station shows vignettes of androgynauts “hoarding toilet paper and doing all the silly shit that we did during quarantine.”

Some of the androgynauts are inspired by real people. Someone playing the violin is inspired by Crabtree’s friend Matt, who learned to play in his newfound free time. The indoor gardener is inspired by Crabtree’s wife, who became “obsessed with her plants.” “It was a lot of fun to pull from actual people that I knew … and how they were coping,” Crabtree says.The reaction has been overwhelmingly positive, says Cunningham. Since Geer Street Garden is right around the corner, Cunningham often takes people to see the mural on his breaks. For Christmas last year, he even received a mug with a photo someone had taken in front of his work. “It was really quite a nice little ego boost,” he says – and much needed at the time.

Cunningham knew from the beginning he wanted to create something light to offset the heaviness of the pandemic. He and Crabtree hoped people in the neighborhood would feel that: “The biggest thing was to bring a sense of levity —- a very human sense of humor to something that seemed bigger than all of us,” Crabtree says. 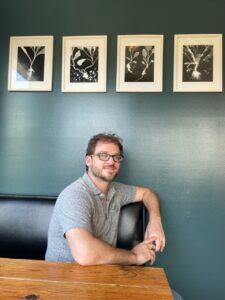 Amid mundane and often maddening quarantine life, the mural gave both artists a sense of purpose. “You could only go on so many walks before you needed something to do outside the house,” Crabtree says. “The fact that we could be in the middle of something like that and hold a mirror up to it and laugh at it … that was very good for us as individuals. And we shared that with every single person who would stop by.”

Since “Life in Quarantine,” Cunningham and Crabtree have collaborated on another mural of the Raleigh city skyline commissioned by R&D Brewing, this time with Crabtree as the artistic director. Still another mural may be in the works for the duo soon.

Cunningham says he thought briefly that murals could be the pair’s way out of the restaurant world. That’s until he  realized how much they’d have to charge. “I don’t think muralists make much more than bartenders.”

As we walk up to the mural, he licks his thumb and smudges dirt off the wall, lamenting some of the little androgynauts who are losing their features. He tells me some of the paint is coming off because of the lack of a seal – it was expensive, and they knew the building wasn’t going to be there forever.

The building is slated to be demolished four years from now to make way for an apartment building. The team knew this from the beginning: “This was never a permanent thing,” Crabtree says. “It was very much about being in the moment.”