Home » Open Mic night at the Blue Note: “The vision was just to have fun” 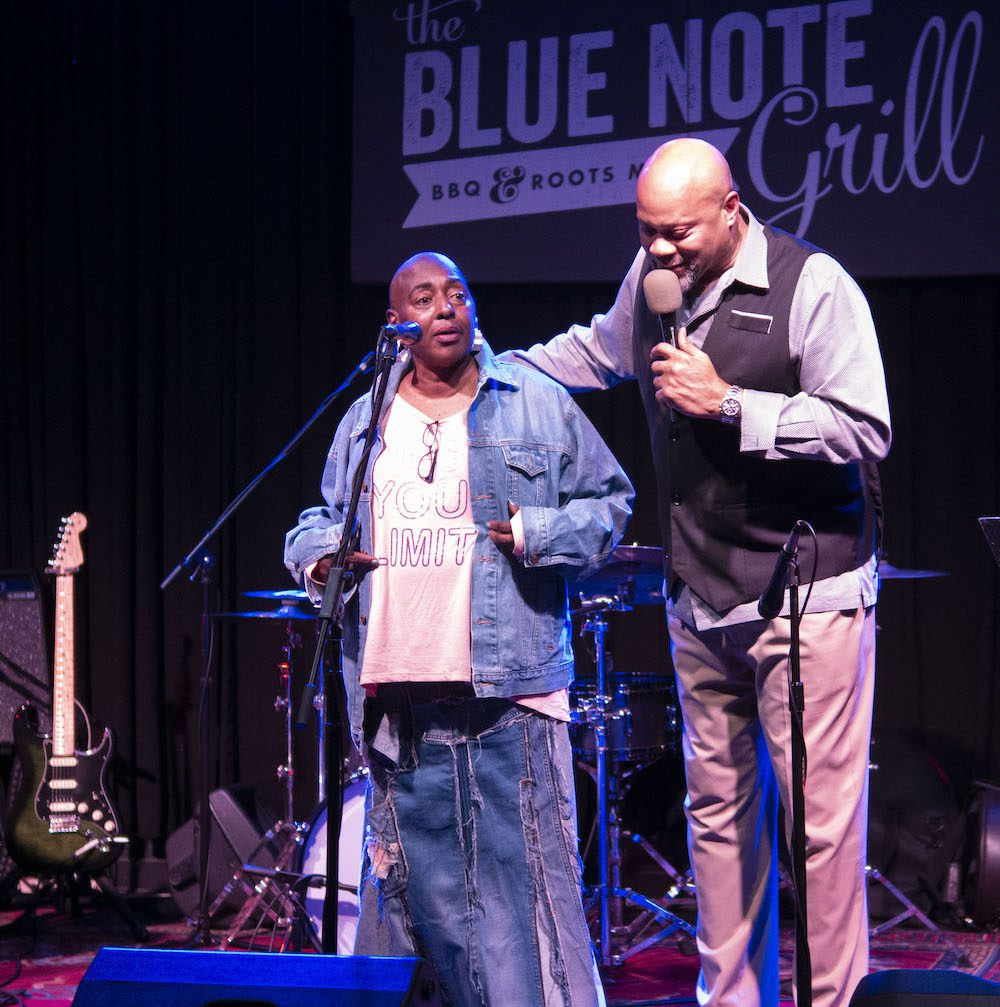 Open Mic night at the Blue Note: “The vision was just to have fun”

It’s the middle of the week, but The Blue Note Grill is bursting with energy; this is undoubtedly the liveliest party in downtown Durham on this Wednesday night. Cutting through the noise, Brett Chambers, a tall man in a vest, comes to the front of the blue-lit stage.

“My name is Brett and this is Brett’s Wednesday night Open Mic night,” he says, pausing to beckon once for applause, then a few more times, until the crowd is roaring and he’s satisfied. “Our first rule is … ?”

“Have FUN!” the crowd responds in unison.

Open Mic has been going on for 26 years, and many of the people here have been coming for nearly its entire run. As the musicians warm up, everyone is hugging their way around the room. Even the first-timers are swept up in conversation with neighboring tables. Chambers, 64, now a North Carolina Central University journalism professor, walks around with a camera, greeting and taking photos of everyone for his Facebook page.

Chambers sits down at the drum kit, and the band starts to play. A man wearing a red, patterned blazer and a fedora starts scatting. The regulars call him “Mr. Showtime.”

People sing along between bites of barbecue and mac and cheese. The area in front of the stage  becomes a dance floor as people get up from their tables. Some dance solo, some as couples, some form a line dance. They high-five as they pass each other.

Lead singers and musicians switch out and the room fills with the sounds of blues standards, soul hits and a little bit of pop. The bassist finishes playing and hops off the stage to join his wife on the dance floor for a Hall & Oates song. Then everyone abandons their dinner and jumps to their feet for Prince’s “Kiss.”

You don’t have to be rich to be my girl

You don’t have to be cool to rule my world

One woman wearing all white stays on her feet for every song. One of the singers cheers her on: “Get your Betty White-lookin’ ass out there and dance!”

Open Mic began in 1996 when Chambers, a Duke grad and then-TV news producer, bought a new drum kit. His keyboardist friend James “Coffee” Yourse told him he wouldn’t get any better by playing drums in his bedroom and invited Chambers to play with Yourse’s band, Sweet Dreams, at a downtown restaurant called Talk of the Town.

Chambers played two songs with the band. “I sucked,” he says. But it got him thinking: “I bet there are other people like me who are singing in the shower, playing in their bedroom.”

He pitched the idea of an open mic night to Sam Sellers, the restaurant owner. Sellers offered to stick around an extra hour after he and his friends played cards on Wednesday nights (“I was actually thinking Sunday or Monday, but it’s his place,” Chambers says). The first week, there were 12 people at the restaurant — and six of them were playing cards.

Chambers thought that was it for Open Mic, but “at the end of the night, [Sellers] said, ‘See you next week.’ I said, ‘Sam, we had 12 people.’ He goes, ‘Maybe you’ll have more people next week.’”

Yourse is playing the keyboard tonight. He and a few other musicians (including a saxophone player aptly called “Bill Sax”) have been coming since the first night, or close to it. Chambers calls the band “The Usual Suspects.” (“People would say, ‘Who’s gonna be there?’ and I would say, ‘The usual suspects.’”)

The same goes for the crowd. “We’ve seen people get married, divorced, married again, divorced again,” he laughs. “This has become like a family.”

Since its start at Talk of the Town, the Open Mic has been in seven locations. It’s been a pit stop for several famous musicians and the birthplace of a handful of bands. During the pandemic, the regulars held “family reunions,” which Chambers described as “less music, more talking … checking in on each other.”

Chambers says he’s been true to a simple goal. “It’s been an amazing ride, but the vision was just to have fun.”