Home » Hillside leader tapped as Principal of the Year — again 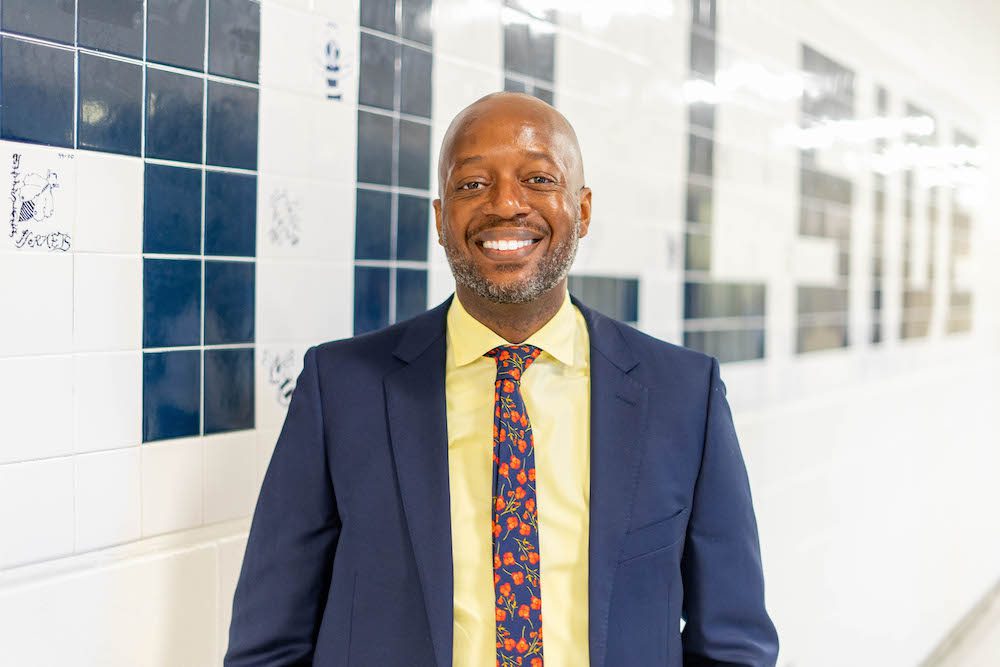 Hillside leader tapped as Principal of the Year — again

A row of college baseball caps decorates the wall behind William T. Logan’s desk. The caps — from Clemson University, North Carolina State University and the University of Oregon, among others — represent universities where Logan’s former students have gone on to college. Logan, who has served as Hillside High School’s principal since 2012, was recently named Durham Public Schools’  Principal of the Year. It’s the second time he’s received the honor, after being named Principal of the Year honors back in 2014 as well.

The 9th Street Journal had a chance to speak with Logan earlier this week. The interview  has been edited for length and clarity.

How’d you find out [about being named Principal of the Year]? And what was your reaction at first?

So I found out by surprise. Initially, I thought we were actually doing a signing day for two of our athletes. And so the school’s lobby was staged like we normally stage for a signing day, and the athletes were up front. And so the only thing that was different was I was asked to do the welcome, and as I was finishing the welcome I was asked to remain at the podium, and lo and behold, everybody walked in with balloons — everybody being the superintendent and his central office administration. And so I kind of knew what was happening at that point. But it was a surprise, a pleasant surprise.

What does your day-to-day look like now, and has that changed from before the pandemic?

Do you have a specific example that comes to mind with a particular student or teacher?

With a particular student, just trying to help him, or encouraging him, to stay in school. Because the financial dynamics of people’s households have changed so much. During the pandemic, we saw a lot of our students needing to work to help their families. And so that’s still the case with a lot of our older students, and some of them are opting to not come to school. And so just trying to coach a select few students, those who I’m privy to having that situation, “Hey, I know, it’s tough, and you need the hours, but we need to figure out how to balance all of this, so that you actually walk away with a diploma. Especially with your being that close as a junior or senior. But I also understand the need to support, help support, your family.” So, yeah, so that would be an example.

You started as a teacher in South Carolina. What convinced you to become a teacher at first?

I actually started off undergrad with aspirations of going to law school, so I was majoring in political science and was convinced to switch my major to English and [then] to English education. And once I got that curriculum and took my first education course, we had an assignment where we had to go and observe a classroom at a local high school. And from that moment on, [I] fell in love with the whole idea of actually having that kind of an impact on students.

When you started out as a teacher, did you ever see yourself becoming a principal?

Definitely not. It was nothing that I had aspired to when I initially became a teacher, because I was just really enamored with the idea of teaching. After about four or five years of teaching, I kind of got this whole itch to want to expand my impact on students…. And so I pursued a degree in counseling, and from there, I decided I wanted to go into administration. And yeah, I have loved every moment of it.

Since you started as principal, what has the school improved on, and what are some of the things that over the next few years, you have your sights set on to improve even further?

Academically, when I first got here, the school had been deemed a low-performing school. And so we have not had that designation since I arrived. Actually, there was one day we had the designation. And we were able to clarify the data, and so we figured that out within a day or two.

I’m proud that a lot of my teachers have gone on to become instructional coaches. Some have gone on to become administrators, several of my [assistant principals] have gone on to become principals. I’m a big fan of growth, and helping people to grow. So those are the things that I would be most proud of. Of course [there’s also] the accomplishments in the areas of athletics and in the arts, state championships and first-place prizes and different scholarships that our students have earned, very competitive scholarships that are nationally recognized.  We’re able to do all of that as a result of being here at Hillside.

The things that I would continue to work on is just motivation, helping students to see themselves as not only who they are, who they are wanting to become. I’m always amazed at how many students have never had rich conversations about their future aspirations.  We wonder why students are out here, aimlessly. It’s because nobody has given them a goal to focus on.

Is there a specific case where a student really improved during their time [at Hillside], and they got one of those scholarships you mentioned?

I know we’ve had students who have literally been homeless, and they persevered and got their diploma, went on to college. [They] had difficulties in college financially, but they persevered. [One] student is a financier, working in Charlotte as a financial consultant, got his MBA at Chapel Hill, and he’s doing extraordinarily well for himself.

From your 10 years as the [Hillside] principal, is there a moment that stands out where you’ve built a really good relationship with a student that ended up with that growth that you talked about?

To see a former student actually come back as a teacher, I’ve had that to be the case several times, and not just come back and be a teacher, but be a phenomenal teacher, because I think they understood what I was trying to achieve when they were students here, and now they want to give back and contribute to that same vision and mission. And so they come back and they do a phenomenal job. To me, that’s one of the biggest rewards that I could say that I’ve experienced.

What’s one thing that I don’t know about you that you would want people to know? And what would your friends and family say about you to someone that doesn’t know you?

While I’m always appreciative of the different recognitions and opportunities, I try to keep the main thing and that is paying homage to God. I trust him, he’s the person who’s gotten me here, in spite of my shortcomings, and all of the mistakes that I’ve made in my life. So, I’m not perfect, and I don’t engage with people like they’re perfect, I get it.

I think to some people, just based on what I’ve heard, I was told that I could be a firecracker, whatever that means [laughs].

For me, it’s just about advocating for the resources that we need in this building. And so for some people, I think that makes them uncomfortable, because I’m just not one to go with my feelings. It’s usually, I’m coming to you with the data, the policy or the legislation that suggests we’re supposed to have these resources, and we don’t.

Like I said, I don’t know how that makes people feel. For me, it’s just about getting the resources that we need.  And not to say that we’ve been restricted from resources, but there are just some things you just have to fight hard for. Because if it’s what teachers need, if it’s what the students need to be able to do their jobs effectively, we have to get those needs in here.