Home » Mulch, fertilizer and 108 years: garden business has a new address, but a time-honored approach

Mulch, fertilizer and 108 years: garden business has a new address, but a time-honored approach 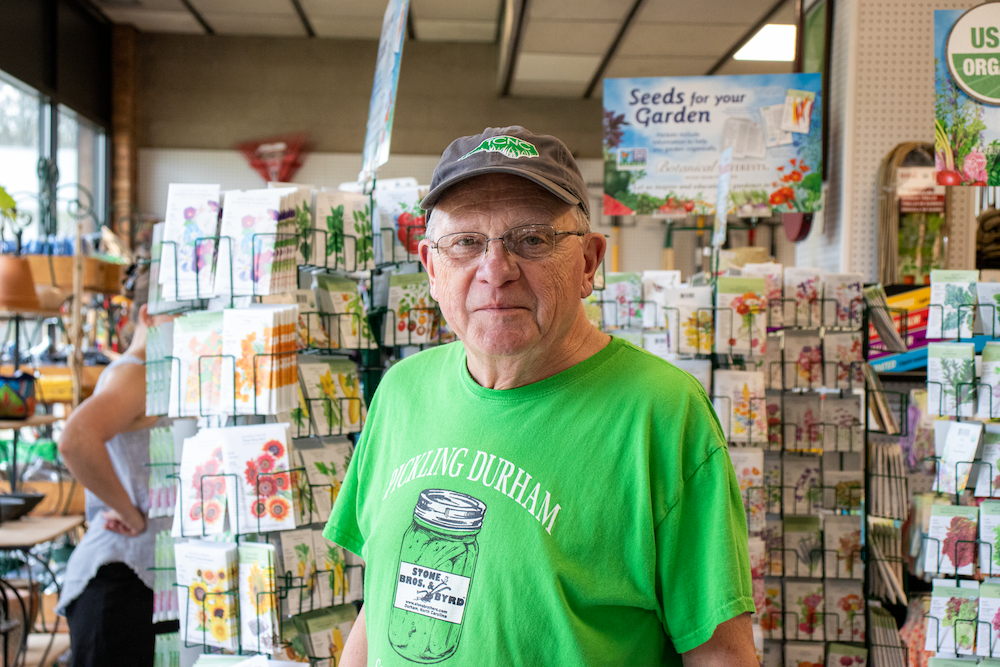 Step inside, and you’ll feel like you’ve been teleported back to the 1920s.

Racks of fertilizer and seed line the aisles. An assortment of gardening hats lies directly in front of the entrance. Step into a smaller side room, and the bags of mulch are impossible to miss. Locally owned stores like this one are not as common anymore, but don’t tell that to George Davis, the owner of Stone Brothers & Byrd.

On a recent Friday, Davis, wearing a classic gardener’s hat, was helping customers left and right. Even after 46 years of ownership, his dedication is still evident.

For 108 years, Stone Brothers has been a staple of the Durham community, providing gardening resources to local farmers and families. From Moss Out! to Cardinal food, from flower pots to gardening gloves, Stone Brothers could always be relied upon, and that’s not about to change.

What has changed, though, is where that reliability can be found.

For over 50 years, Stone Brothers sat at 700 Washington Street, where the business and its longtime location became intertwined.

But in line with recent development trends in Durham and the Triangle region, that’s changing. Last May, Beacon Street Development announced it had bought the land from Stone Brothers and laid out plans to build a seven-story complex with 40 luxury condos. With construction set to begin this month on The George, named for Davis, Stone Brothers has moved down to 937 Washington Street, a two-minute drive from its previous spot. 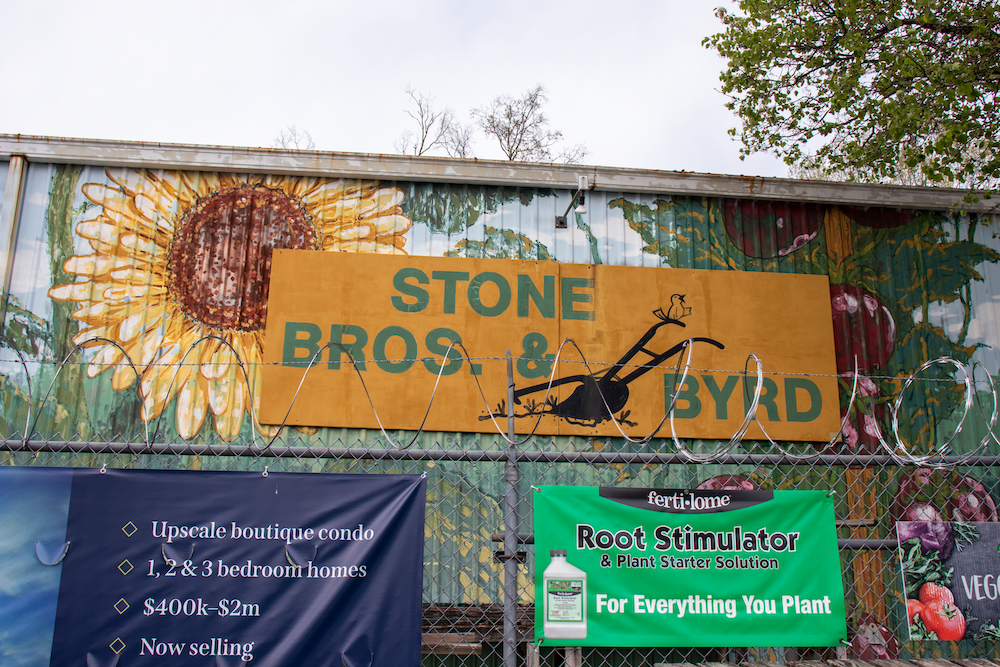 The new development is one of several changes coming to a historic section of the city. Just across from the Durham Athletic Park—the 1926 ball field where the baseball movie “Bull Durham” was filmed in the 1980s—the land is on the corner of West Geer and Washington, with longtime Durham staples like King’s Sandwich Shop just up the road.

Neighboring businesses say they’ll miss Stone Brothers. The Durham Distillery, for instance, relies on Stone Brothers for the molasses for its liqueurs.

“Now we have to walk a little bit further,” said Josh Dixon, the distillery’s marketing coordinator.

Meanwhile, Durham Distillery is also facing a second development in its backyard, a six-story mixed-use project headed by Florida-based Ram Realty Advisors. Right behind the distillery, a train trestle butts up against the loading dock, with enough space for backdoor deliveries. But not for long.

“This new building that is coming in will be building a retaining wall where that train trestle is,” Dixon said. “As it currently stands, that retaining wall will keep us from being able to use our loading dock. Which means that we’re going to have to figure out our entire operation.”

“The spirit of Durham has always been about caring for each other, giving to each other. This parking-land agreement, those agreements have been just historically such a big part of being a small business owner in the Durham area.”

Still another condo project is in the works a few blocks down Geer Street. Dixon is concerned that so much development may disrupt the character of the neighborhood.

“The people who’ve been here, who’ve been traditional Durhamites, are being pushed out,” Dixon said.

Some of Stone Brothers’ former neighbors, though, are philosophical about the changes.

“Ten years ago, you wouldn’t want to be down here,” Whittington said. “There was nothing going on, very little business, just buildings and warehouses or industrial-type stuff.”

Stone Brothers did not go too far—since Feb. 26, it has been in its new location further north on Washington Street—but it still occupies a different space for the first time in decades.

Davis, who has been the sole active owner of Stone Brothers since he and a few family members bought the business in 1976, said he had a lot on his plate with the move.

“It was a lot of planning,” said Davis. “My right arm came up here and laid out a bunch of displays, had done measuring down [at the old location] then came up and measured spots up here…. We started a month ago moving warehouse merchandise ourselves.”

Debbie Swanner has been shopping at Stone Brothers since the 1980s. On a recent Friday, she was in the store searching for starter plants for her flower bed.“You don’t have to buy everything packaged up, you can say, ‘I want an ounce of cucumber seeds,’ and if you have a small garden, that’s great,” she said. 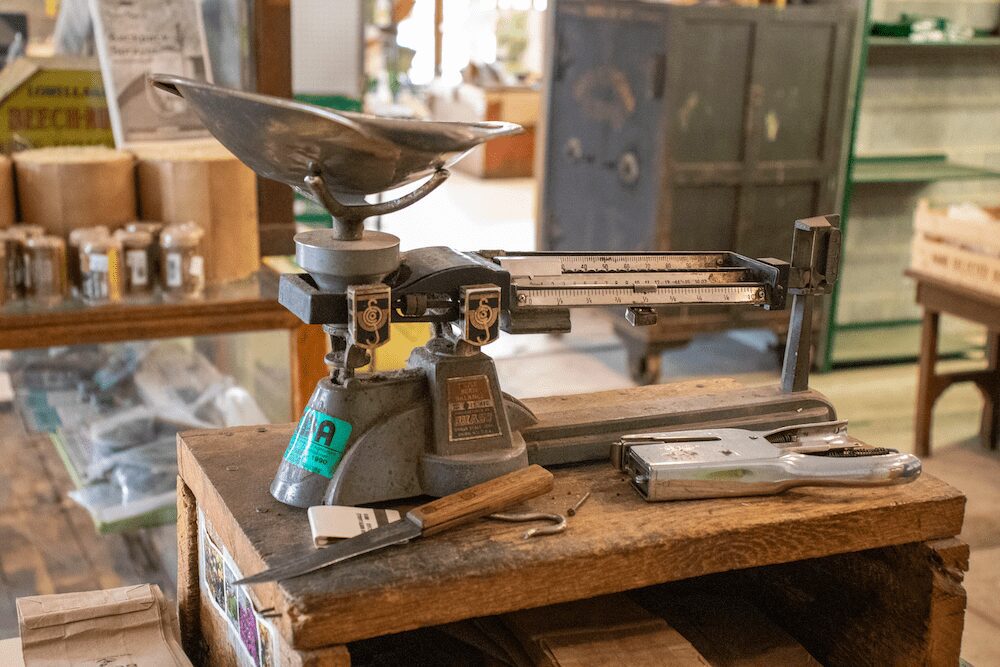 “If you have a garden center, you need sun to put your plants out for people to look at it,” she said.

Davis also sees some benefits from the move.

“We sort of have more parking space, which we think will aid our customers quite a bit,” he said.

Davis doesn’t envision any changes to the mission of the business. Being able to adapt to the ever-evolving needs of customers is “what keeps us going,” he said.

Fertilizer to seed. Avid gardeners to families simply looking for some outdoor supplies. It might have packed up and moved down the road, but 108 years later, Stone Brothers keeps on keeping on. 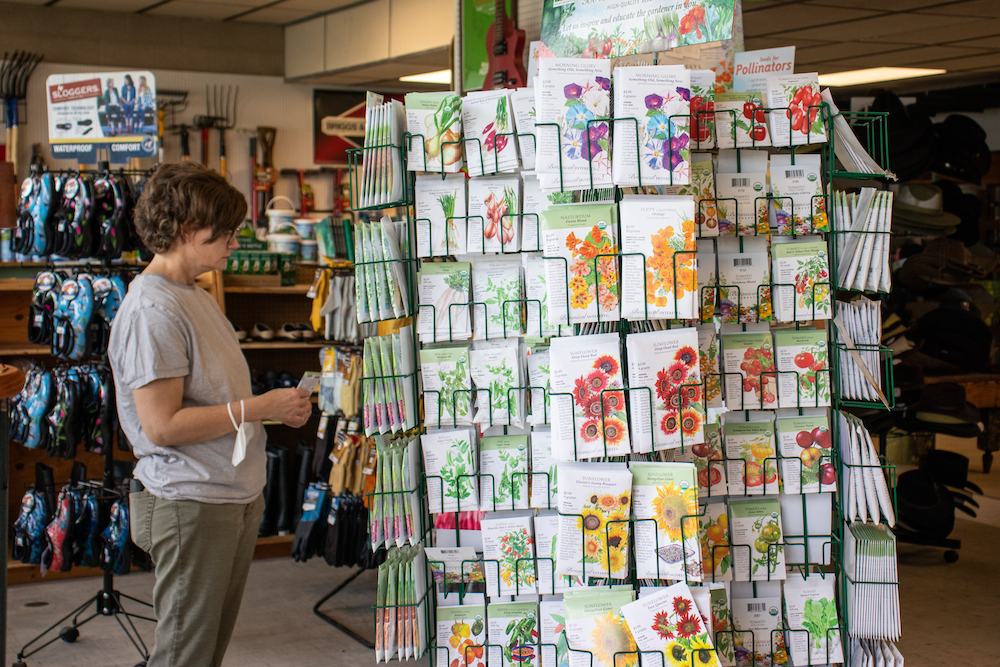 Above: George Davis has owned and managed of Stone Brothers & Byrd since 1976. Outside Stone Brothers’ former location, signs reflect the former business and the new condos that are coming. Immediately above, a customer browses in Stone Brothers’ new store. Photos by Milena Ozernova — The 9th Street Journal