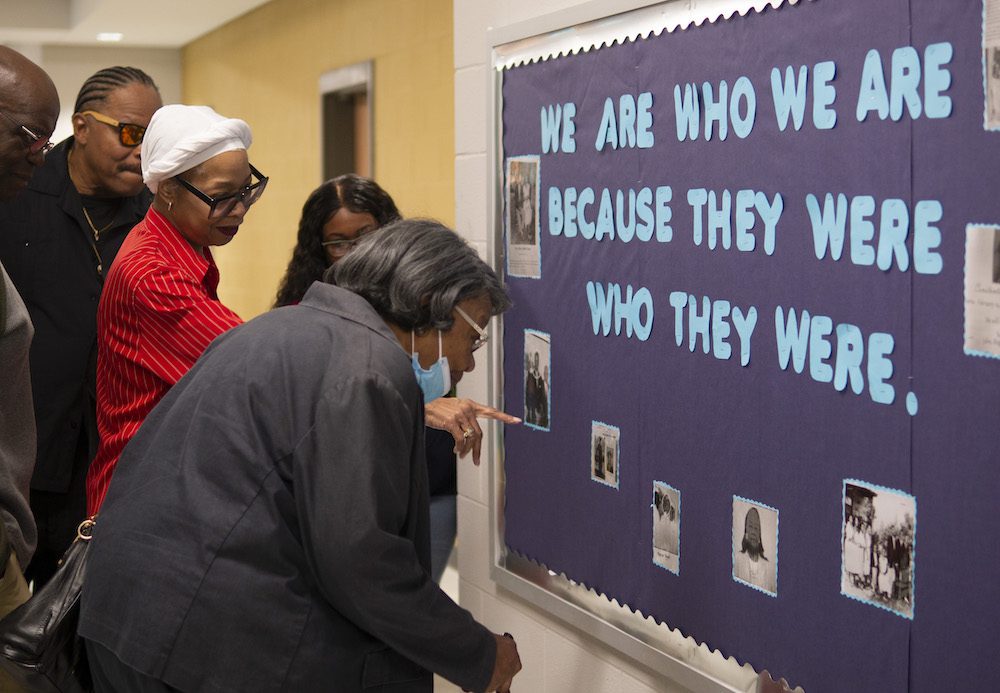 On Friday, Sep. 23,  as members of the Lyon family took a student-led tour through the halls of Durham’s newest elementary school, some students wondered aloud who the visitors were. The questions forced their teachers to give them a bit of a history lesson.

Eight years ago, Durham Public Schools bought over 50 acres of former farmland off of Scott King Road, near C.M. Herndon Park in South Durham. The land is now home to a brand-new school serving students in pre-K through 5th grade, Lyons Farm Elementary..

The Lyon family owned the land on which Lyons Farm Elementary sits from 1938 through most of the 20th century, leasing it to tobacco farmers, growing the local farming economy and planting the seeds for the tight-knit neighborhood that remains nearby today.

When the school district solicited public suggestions for the name of the school via a three-week social media and robocall campaign, nearly 700 community members submitted recommendations via the district website. The school board chose Lyons Farm in January 2021.

At the school’s dedication ceremony, John Lyon, the 90-year-old patriarch of the Lyon family and the grandson of a slave, spoke passionately about the decision.

“For some reason or another, someone down the line recognized that the Lyon family did a lot of work to make Scott King Road possible, and it did develop into this, which is almost beyond a dream,” Lyon said.

“This doesn’t happen too often, when you get a school of this magnitude named for a poor Black family that comes from slavery.”

“Good morning, and welcome to our school. A Durham public school,”  Hopkins said, as the early morning sun reflected off the newly constructed school building.

Hopkins started as a history teacher at Riverside High School and then at Chewning Middle School. After that, Hopkins became an administrator, serving as an assistant principal at Jordan High School and Carrboro High School, and then becoming the principal at Lakewood Elementary School. But he wanted a school that he could call his own.

“When they broke ground, I would drive my car around the site, and I would dream,” said Hopkins.

Hopkins emailed Superintendent Pascal Mubenga to express his interest, mentioning that his children, a third-grader and kindergartner, would be “part of the school community.” He was tapped to lead the new school in November of 2021. Then it was time to get to work, as Hopkins set about learning about the Lyon family and assembling his staff, choosing a group of 52 from among 300 applicants.

Hopkins said that he is confident in that group.

“The quality of teachers that we have in this building, there is no doubt in my mind that we will exceed expectations academically,” he said. “When you have a good staff—I mean, teachers are hard to come by—we’re gonna do some big things.”

While Hopkins has served as a principal before, being the first principal of a new school is a different story, he said.

“It’s a much bigger lift than I think a lot of people realize,” he said.

To learn the history of the Lyon family, Hopkins developed relationships with John Lyon and his son Reggie, a Texas-based entrepreneur and the CEO of Channel Source, a beauty products company. He went out to dinner with the two and visited John’s nursing home.

“I’m a Lyon family groupie now,” Hopkins said with a laugh. “I really want to make sure that I can tell their story, because if I have the platform and don’t share it, I can’t expect the building to do that.”

The building does tell some of the Lyon family story, with tributes to the family’s history scattered throughout the school hallways. Family photos adorn one collage, and the school crest includes a rooster to represent the family farm and seven stripes to represent Eddie and Eula Lyon’s seven children.

At the school’s dedication, as the crowd listened to jazz by Al Strong, the tour groups moved through the green-, teal- and white-painted halls, past a photo of the Durham skyline in the main lobby and on towards the classrooms. From each, you could see the surrounding landscape and forest, a subtle reminder of the land’s importance to generations of farmers.

Now, a school defines the land, but the legacy of the Lyon family remains.