Home » Support beyond the court: A local non-profit’s work with homicide victims’ families 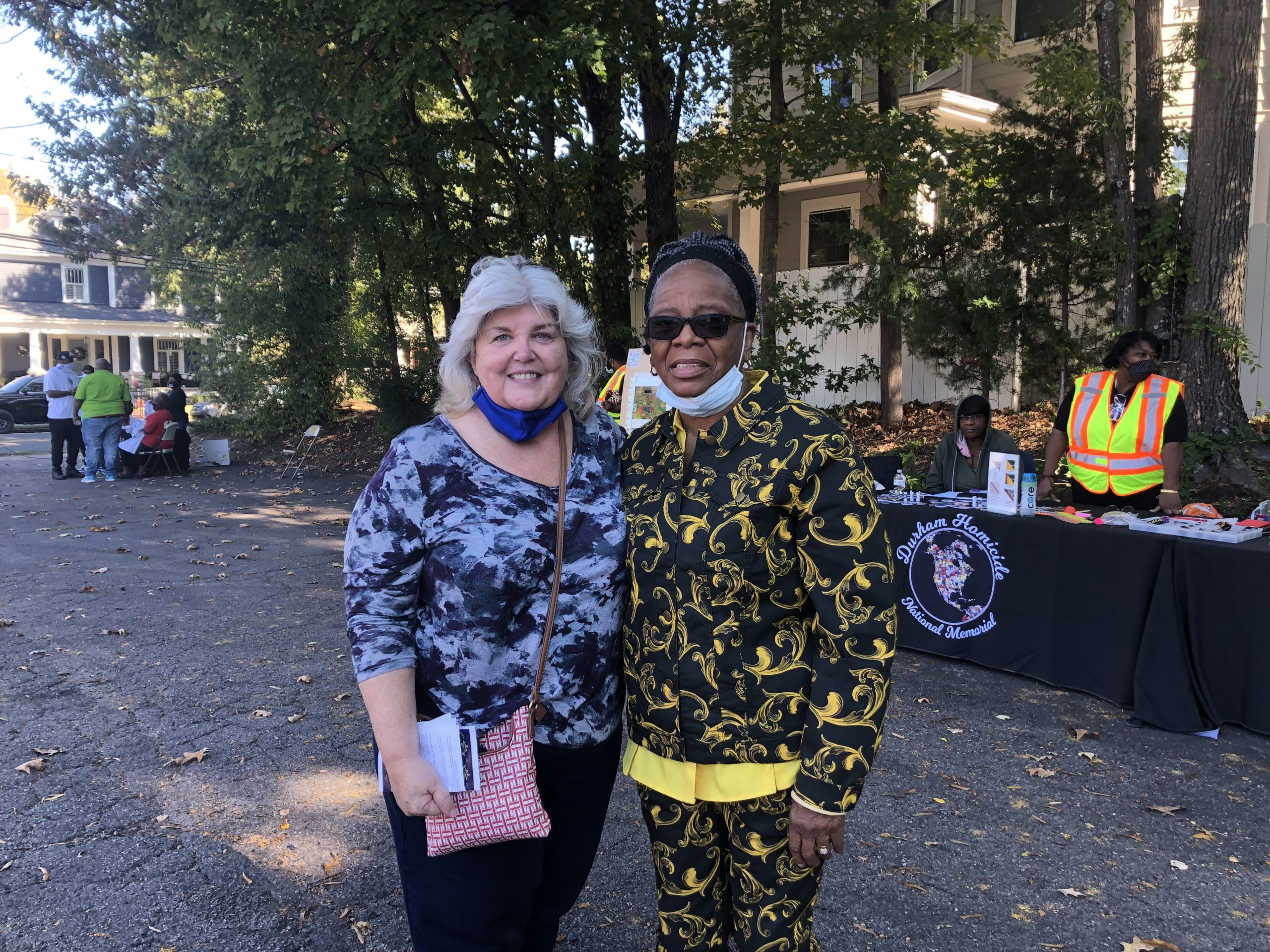 Support beyond the court: A local non-profit’s work with homicide victims’ families

The murder victim’s mother rushes out of the bond hearing in tears. Marion Bailey hurries out after her.

Bailey, a 74-year-old retiree wearing a bright purple sweatshirt and matching pants, convinces the distraught mom to sit on a bench outside courtroom 7D one recent morning at the Durham County Courthouse. Bailey holds the crying mother in her arms.

The mother has just heard Judge Orlando Hudson Jr. set bond for the man charged with murdering her son. The chief Superior Court judge ruled that the defendant had to pay  $150,000 to gain his freedom — frighteningly low, in the mother’s opinion.

Waiting in the hallway with a family friend is the deceased victim’s 8-year-old daughter. The girl watches her grandmother’s weeping, confused.

“Grandmama just heard something that made her sad,” Bailey says to the little girl. “She’ll be all right in a minute.”

Bailey scoops up the child. Still sitting on the bench, she wraps one arm around the girl, the other around the murder victim’s mother.

Last year, 37 people were killed in Durham. Each homicide leaves behind grieving families. While the court system pursues justice, the care and support of these families is often left behind.

Into that gap step people like Bailey, who works with the Religious Coalition for a Nonviolent Durham.  Its volunteers use grief groups, vigils, and the simple power of their presence to guide relatives of homicide victims through what can sometimes be a cold and complex court process.

Three years after her sister’s murder in July 2018, they finally have a trial date for November. McCall is “sitting on pins and needles,” hoping it will proceed as planned.

Homicides can take years to resolve. The mountain of evidence must be processed by a state crime lab, and the severity of the crime means numerous pre-trial motions. Prosecutors are sometimes reassigned and defendants change attorneys, causing further delays. Some cases remain open from 2015.

Once the process begins, families realize the court system is not focused on their loss. At a quarterly administrative meeting designed to get all pending homicide cases before a judge, “Each case might only be discussed for a couple of minutes,” Willets says.  “The defendant may or may not be there. The family’s loved one’s name might never be said.”

The lack of attention to victims devastates families. “I just want someone to care and acknowledge who my sister was,” says McCall, whose sister was 59 when she was killed.

Unlike defendants, who have an attorney to advocate for them, victims have no representation. Prosecutors represent the state, leaving victims’ families without a role and often without a voice.

Victims’ families are guaranteed only one chance to speak in court — at sentencing. The D.A.’s office has tried to address this by holding quarterly sessions to meet with families and discuss the court process, but Willets recognizes it falls short.

“There’s still not room to support people in the way that they need and deserve. Because at the end of the day, our staff also has a job to do in which they have to remain objective,” Willets says. “There is still a need for something outside of the court process.”

That’s why the Coalition assists, and advocates for, victims’ families.

“When you cannot pick up the phone and call [your loved one], it is a deafening sound in your mind,” McCall says. “And then to further feel like it’s just a process what happened to them. It’s not okay. And the Coalition ensures that we know that it’s not just a process. They ensure that we know that this person that got taken through anger, through whatever reason, that they mattered.”

The Coalition was founded in 1992 by civil rights activist Leslie Dunbar and Reverend Mel Williams in the wake of rising gun violence in Durham. A non-profit, it supports the formerly incarcerated as they re-enter society and facilitates restorative justice, an alternative to the traditional court process.  It also supports families of homicide victims through its vigil ministry.

The vigil ministry helps families navigate a confusing and emotionally taxing legal system. Coalition members give families rides to the courthouse, attend meetings with them, accompany them to hearings, and help them to fill out paperwork and prepare for trial.

Bailey and three vigil team members also keep track of all the homicide cases traveling through the Durham County Courthouse. They take turns spending Monday, Tuesday, and sometimes Wednesday there, trying to keep up with the ever-mutating court calendar.  They do this mostly to keep families informed.

“It’s probably a total of maybe 30 people that you gotta stay in constant contact with,” Bailey says. The team frequently informs families of developments in their case before the court does.

But the vigil ministry’s work goes beyond the courtroom.

When a homicide is committed in Durham, the team immediately uses its community networks to offer support to the family. After several months, they may organize a vigil for the lost loved one. Vigils provide a space for family and friends to gather, mourn, and celebrate the victim’s life.

The Coalition also hosts grief support circles on the third Thursday of every month. Homicide victims’ families come and share how they are doing, discuss their challenges with the court system, and find comfort in a community of people who understand their unique loss.

Not all families accept support right away.

Michelle Hall, whose 34-year-old son, Tavares Hall, was murdered by a stray bullet in October 2018, was not ready when the Coalition first reached out. “But they are patient, and they’re very kind,” Hall says. “[Bailey] stayed in contact with me. And finally, I was able to join one of the [grief support] meetings, and it made such a difference.”

The group’s power lies in the shared experience. “It’s a very lonely place to be when you don’t have people who can share in your pain,” McCall says. “It’s very, very lonely until you talk to someone who truly understands.”

For Hall, a Durham County Library employee of 22 years, the grief circles are bittersweet because, despite the pain that brought them together, the group has formed a strong community of love and mutual support.

Bailey’s 20-year-old grandson Javaun Graves was shot and killed in 2015. Graves was one of her nine grandchildren and six great-grandchildren. Bailey was a volunteer with the Coalition prior, but after what she calls Graves’s “senseless murder,” she felt compelled to work with victims’ families.

“I chose to dedicate myself to do anything I can to correct the system so my grandchildren have a chance at life,” Bailey says. “The ones that are still here.”

Bailey, who wears short gray curls and glasses, has a warm, comforting voice. But her dedication is fierce. Formerly an office assistant at North Carolina Central University, she has spent her retirement working tirelessly in the Durham community. The Coalition is just one of her many ministries.

“When [people] say ‘I don’t know where I would be without the Coalition’…I think they are really talking about Marion,” says board member Susan Dunlap, who helps Bailey facilitate the grief groups.

Bailey is known for going the extra mile (literally) for homicide victims’ families. Once, “one of my guys was really upset,” and she drove all the way to Cary to comfort him. She takes phone calls in the middle of the night. She meets with school counselors to explain why a victim’s child may be struggling. She and the team deliver food to families in need.

Bailey, who says she has no time for a significant other, remains in contact with all the families, even after their court case is resolved. McCall says, “Marion texts me all the time.”

But she is most loyal to the mailman. She has already sent out 15 encouragement cards in October and is preparing her November batch. She sends cards to families around the anniversary of their loved one’s death, to honor missed birthdays, or to uplift anyone who needs extra care.

The support goes both ways. After her three surgeries this year, “My families rallied around me. I got calls, I got cards, I got food, I got flowers.” Bailey says. “They stepped out of their own grief and their own worrying to sacrifice, to be sure I was OK.”

“Marion gives us opportunites to take a breath,” McCall says. “She makes us feel like we belong to life.”

PHOTO ABOVE: Teresa McCall, left, and Marion Bailey stand together at the 29th annual Vigil Against Violence, organized by the Religious Coalition for a Nonviolent Durham. The Coalition supports families of homicide victims, and Bailey is one of its staffers. McCall’s sister was killed in July 2018.