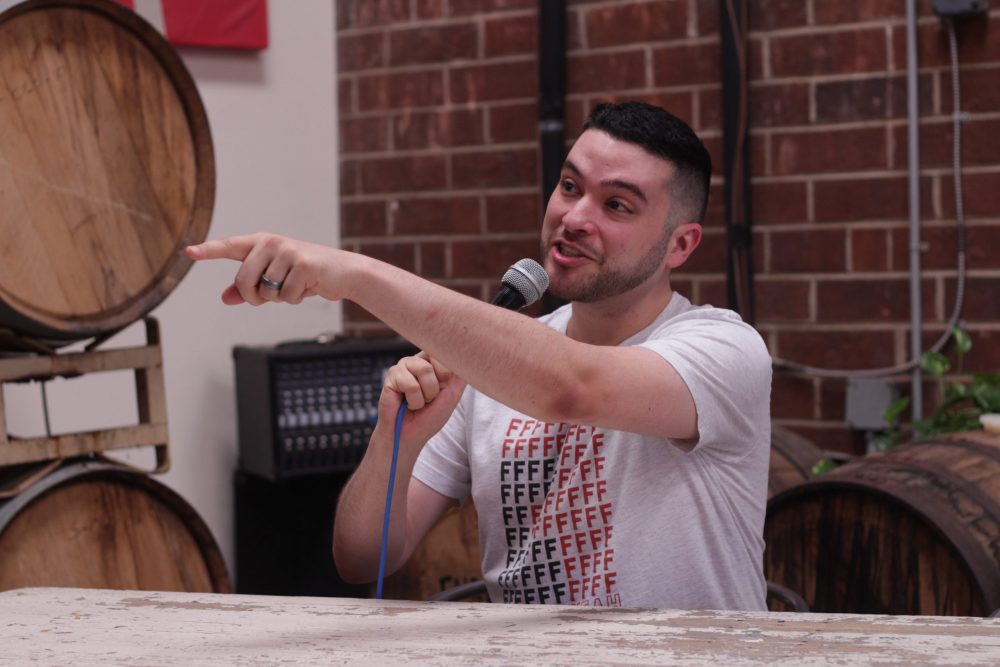 The air stirs as the game is about to begin, possibly from the giant ceiling fan or maybe from all the brainwaves filling the bar. The best and brightest of Durham have gathered and are preparing for cerebral combat. The screen flashes to life:  “Fullsteam Brewery presents the 499th edition of Thursday Night Trivia.”

Very soon teams will be huddled in heated discussion over a vital fact: Which color M&M is said to act as an aphrodisiac?*

Fullsteam Trivia Night is a quirky Durham tradition that has been puzzling residents for the past 10 years. Every Thursday night, locals, Dukies, and highrise-dwelling millennials gather to show their trivia chops and have a pint of the local brew (try their summer speciality, Above-Ground Pool). Approaching its 500th edition on July 29, Fullsteam’s weekly trivia night has garnered such a loyal following because let’s face it…

Durham is a city of nerds.

Add up (and this group likes to do math) Duke, Research Triangle Park, Google, not to mention Apple on the horizon, and the abundance of brainiacs makes Durham a place where it is cool to be smart. We take pride in knowing which Civil War officer is mistakenly credited with inventing baseball or being able to identify various types of beans.

Facts and a good IPA – a perfect night out.

Fullsteam, a Durham institution since 2010, serves as the location for this meeting of gray matter. It fits with founder and CEO Sean Lilly Wilson’s vision of serving ”as a community center and a mirror of Durham.”

Teams such as the QuaranTinas and Hookers for Jesus sit at orange picnic tables to go head to head in the cavernous (and partially air conditioned) warehouse. Despite the towering brick walls, the houseplants and skylights keep the brewery welcoming and bright.

Odd team names are an essential part of the experience. Some, like Arturo’s Batgoats (named after host Arturo Sanchez), are regulars and even have T-shirts, while others dig deep for their inner comic week after week. Other recent names include Nerd Immunity, Trivia Newton John, Botany is Bitchin, and Tequila Mockingbird.

The collective brainpower of the crowd is impressive.  Many participants are Duke graduate students, such as the members of Fran’s Spicy Meatballs. The rest are young professionals, and a few long-time Durhamites. The game is so alluring that some Fullsteam employees stay after their shift to play.

Host Zak Norris rattles off the rules and announces the first category: National Flags Made Out of Food.

(Snarky categories are part of the fun, such as Canadians, Funky Body Parts, Famous Elves, Words that go with “Duck”, Things that Spin, and The Supermarket as seen by your Dog – Blurry Groceries.)

As the questions begin to roll out, “It’s like watching a ripple go through the crowd,” said Sanchez. “When you ask the question, it gets quiet. You see heads come together at the table. And it’s almost like a communion.”

Immediately there is a chorus of hurried whispers and nods of agreement. Sometimes after a momentary freeze, BOOM!, faces light up. At one table, players celebrate their guesses, prematurely sure of their correct answer. At another, hands fly gesturing to argue their side in a fierce debate.

For the really hard questions an audible “huh?” can be heard in the sea of blank faces.

Then, the big question of the moment:

What is the most recognized smell in the world?

Players take another desperate sip to find the answer hidden somewhere in the foam.

Once all 10 questions in a category are asked, teams submit their answers on paper or through their phones. (Occasionally teams will leave messages or doodles for the host as well).

The questions change each week, but this trivia night is much like the 498 that have come before.

It began in 2011 when Norris approached Fullsteam about a weekly event. In 2019, Sanchez joined as an alternating host. During the pandemic, he started virtual trivia “because it gave me that sense of continuity, that sense of normalcy that people were craving so much.”

Sanchez enjoys being the center of attention and fills his trivia nights with jokes and personal stories. He will never reuse a question, but there are some noticeable themes. Watch out for celebrities he thinks are cute, anything related to queer culture, U.S. politics and “The Golden Girls.”

Norris on the other hand is a “straightforward, no frills” kind of host, Sanchez said. All answers are submitted on paper and while it takes him some time to tally the answers by hand, Norris likes this break. “I think sometimes a question might spark a memory for somebody and they’ll end up telling their table a story.” Norris enjoys the research to put a game together, but unlike his counterpart, “I actually don’t like getting up in front of people.” He focuses on keeping the game moving and creating a pleasant mind-expanding evening.

What IS the most recognized smell?

When it’s time to announce the answers, the bar is suddenly quiet. Sonic + the Hedgehogs team member Olivier Boivin (a Duke genetics Ph.D. student) sums up the drama. “It’s been a real roller coaster of emotion.”

Finally Norris gets to the tricky one: “According to a study by Yale University, what is the most recognized smell in the world?”

Cheers erupt and picnic tables rock as a few competitors leap out of their seats for high fives to celebrate a surprise correct answer.

When the game is done, eyes scan the Excel spreadsheet to see how they have fared.

The winner of the night is Zack’s Zealots. Team member Matt Lawing is a trivia pro who has been playing at various spots in Durham for the past 10 years. He finished the night with a perfect game.

* Legend says this M&M is an aphrodisiac: Green

In photo above, host Arturo Sanchez. He likes to ask questions about politics, pop culture and “The Golden Girls.” Photo by Becca Schneid, The 9th Street Journal