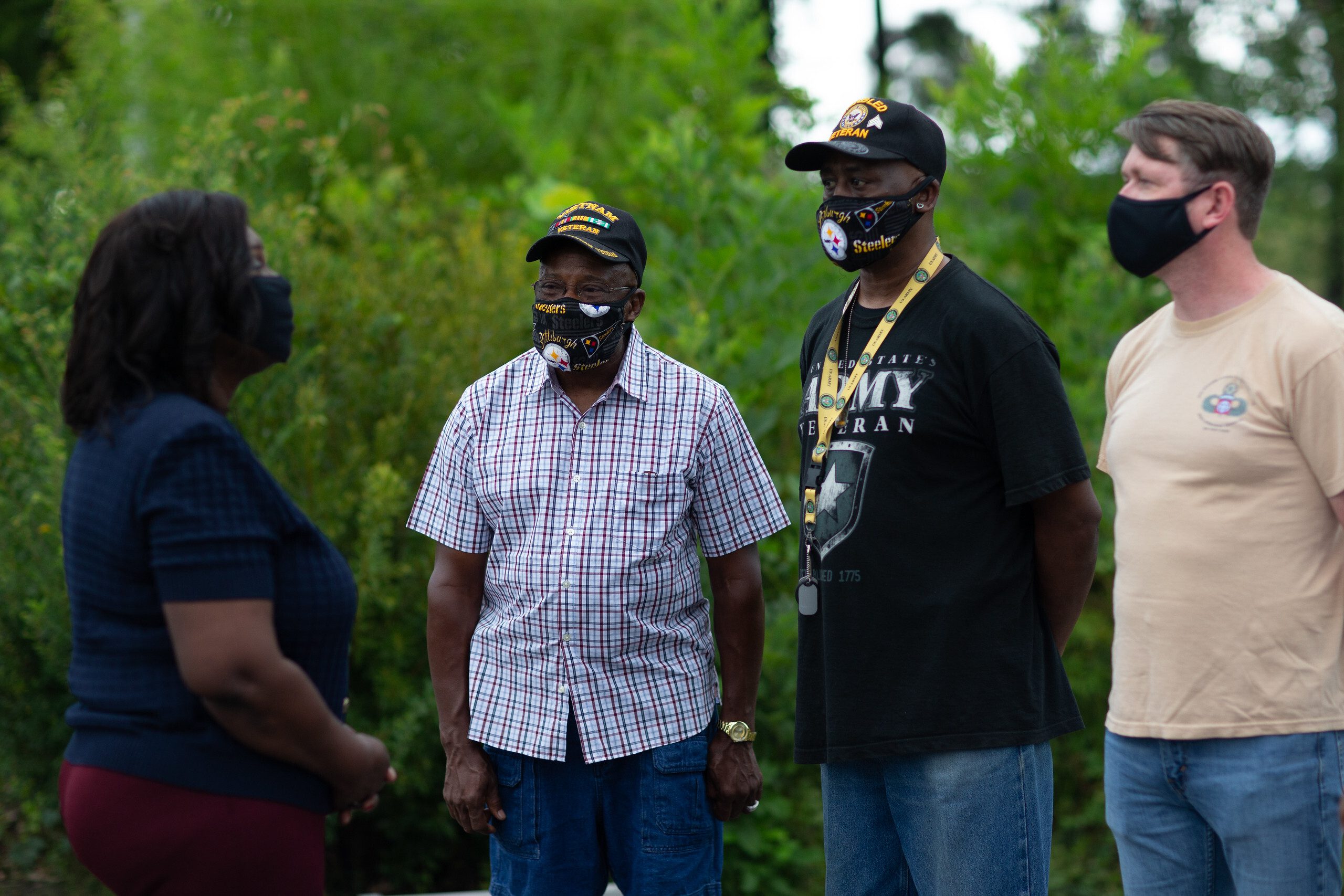 Most Americans don’t think about war every day. Many don’t even personally know a service member or veteran. At Fort Bragg, the nation’s largest Army post and one of the world’s largest military bases, the word carries a different meaning.

With its outsized influence in the 8th Congressional District, Fort Bragg automatically has the ear of its Washington delegation. Now, voters of the 8th District — which stretches from Charlotte’s eastern suburbs eastward to Cumberland County — must decide who they want as Fort Bragg’s next House representative.

A military town that ‘beams with pride’

More than 120,000 soldiers and military family members live on base at Fort Bragg, and roughly 140,000 more live nearby in Fayetteville and other communities, said Elvia Kelly of Fort Bragg’s public affairs office. As the largest metropolitan area in the 8th District, Fayetteville’s voters could play a large role in the outcome of the congressional election.

One could think of Fayetteville as a “monotown” with one big employer: Fort Bragg. It’s hard to understate the installation’s influence on the local economy, said Kelli Cardenas Walsh, an Army veteran and a history and military studies professor at Fayetteville State University.

“People on both sides like to remind the community that without Fort Bragg, the economy of Fayetteville would greatly suffer, and I have no doubt about that,” she said.

Unsurprisingly, the Fayetteville community “beams with pride” and strongly supports the military, Breece said. But there’s also a downside to living near a major base. The community hurts when someone from Fort Bragg gets injured or killed in combat, said Dan Dederick, a retired Marine and one of North Carolina’s civilian aides to the secretary of the Army.

“You know these people, you like them, you go to church with them, your kids go to school with them,” Dederick said. “And then when something bad happens, they get killed or wounded, it’s real close and personal.”

The base makes that close-knit community more diverse, too. Fort Bragg attracts people from around the country, Breece said, and sometimes service members marry overseas. The city hosts an international folk festival each year with a parade of nations to celebrate the different cultures represented.

That combination of diverse city and traditional military base makes for intriguing voter demographics in Cumberland County: 43% of voters are registered Democrats, 23% are registered Republicans and nearly 33% are registered independents, according to Sept. 19 numbers from the North Carolina State Board of Elections.

Unlike the rest of the 8th District counties, which traditionally vote Republican, Cumberland County historically votes Democratic. It was previously split between two districts, with the city of Fayetteville divided down the middle.

This year, though, the redrawn maps reunite the entire county in one district and concentrate the power of the Fayetteville vote.

A proven incumbent, or a hometown challenger?

The incumbent in the race, Republican Rep. Richard Hudson, proudly calls himself “Fort Bragg’s congressman.” Serving the base is his “most humbling and most important duty,”  spokesperson Greg Steele said. Hudson’s commitment to Fort Bragg is proven by recent victories, Steele said, citing increased hazardous duty pay for certain troops and the creation of a pathway for service members to seek malpractice compensation from military health care providers

But Pat Timmons-Goodson, the 8th District’s Democratic challenger and the child of a Fort Bragg military family, argues Hudson has not earned the moniker he’s adopted. Standing up for soldiers, veterans and military families involves more than passing favorable legislation, she said.

“What our veterans and service members need are folks who will stand up with them in tough times,” she said. “That’s what leadership is, and that’s what it calls for.”

She criticized Hudson for his silence after intelligence officials concluded that Russians placed bounties on the heads of American soldiers and for his absence during a vote on the latest National Defense Appropriations Act. (Steele confirmed to The 9th Street Journal that Hudson was indeed not present for the vote.)

“I do believe that my opponent puts his political fortune ahead of the people within our district, including our military families and veterans,” she said.

Hudson declined The 9th Street Journal’s request for an interview. Breece, who knows both candidates personally and will not endorse one, praised Hudson’s accomplishments and said he deserves the “Fort Bragg’s congressman” designation.

“Without question,” Breece said. “He’s worked very hard to get funding for whatever Fort Bragg needs.”

If reelected, Hudson will continue prioritizing military and veterans affairs, Steele said. His top priorities are pushing for additional funding to improve on-base housing and passing a bill he introduced in January to extend healthcare benefits for veterans’ caregivers.

A piece published by The Atlantic in early September said President Donald Trump called service members who died in combat “losers” and “suckers” for “getting killed.” He also reportedly told former White House Chief of Staff John Kelly “I don’t get it. What was in it for them?” while visiting the gravesite of Kelly’s son, who was killed in action in Afghanistan

As more news outlets, including CNN, the Associated Press and Fox News, confirmed various pieces of the story with their own reporting, Hudson took to Twitter to bash the article as “garbage” and a “hit piece.”

“I was there the next day when he stood in the rain to honor our fallen,” Hudson tweeted in the president’s defense.

Steele offered no further comment, but said voters should look at Hudson’s track record to see what he’s done for the military community.

Timmons-Goodson, however, was outspoken on Twitter in her criticism of the president’s reported remarks.

“My father, brothers, nephews, and neighbors are not ‘losers’ or ‘suckers,’” she tweeted. Her father, Edward Timmons, served as a sergeant first class and an 82nd Airborne Army Ranger at Fort Bragg. “We all should honor the sacrifice of those who serve, our leaders should too,” she added.

Amidst the debate, Breece sees common ground: both candidates highly value the military. He’ll feel good about the election’s winner regardless of who it is.

“Both of these candidates are very good and decent people, and they both understand Fort Bragg,” Breece said. “I am confident that Fort Bragg will be well served.”