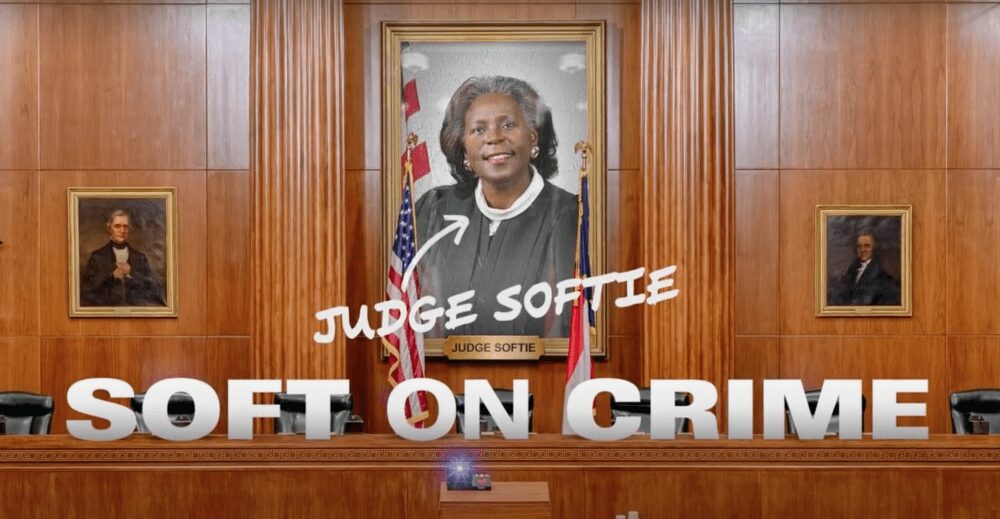 Claim: Says in a TV ad that Democratic candidate Pat Timmons-Goodson is “soft on crime.”

The video then cites two opinions from Timmons-Goodson’s tenure on those two appellate courts.

“Judge Softie let a man walk who stole half a million dollars — from his church. Judge Softie opposed putting tracking bracelets on sex offenders because it would ‘add to their shame.’ Patricia Timmons-Goodson: Too soft on crime, too liberal for Congress.”

The 9th Street Journal contacted Hudson’s campaign to request its background materials and evidence for these claims, but received no response. In the ad, the campaign identified two main sources — a 1998 News and Observer story and a 2010 article from the Associated Press.

To check out Hudson’s claim, let’s explore the two cases he cites.

“Judge Softie let a man walk who stole half a million dollars — from his church.”

Timmons-Goodson was on a three-judge panel of the state Court of Appeals that decided in 1998 to resentence Brian Patrick Mullaney, a man who embezzled $478,000 from his Chapel Hill church. The ruling said an Orange County Superior Court judge originally sentenced Mullaney under the wrong law. He was arrested under the Fair Sentencing Act, but by the time his sentencing came around, the General Assembly had passed the Structured Sentencing Act in 1994. The newer law included mandatory jail time, but capped sentences at 10 months for people like Mullaney who had no previous criminal record. He had already served 11 months and eventually went free.

The Timmons-Goodson campaign says Hudson’s ad misleads viewers by taking the case out of context.

“It didn’t have anything to do with whether he was guilty of embezzlement, or whether he’d been sentenced too harshly or not too harshly,” said Thomas Mills of the Timmons-Goodson campaign. “It had to do with which act was he supposed to be sentenced under.”

Appellate court judges rule based on legal or procedural issues with a lower court’s decision, which is different from a trial court judge who determines guilt or innocence. To say that Timmons-Goodson is “soft” on crime because of a procedural ruling that happened to give an embezzler less jail time is “just plain wrong,” Mills said.

“It’s not a question of being soft on crime. It’s a question of what the law and the constitution require in this case,” said Robert Orr, a former justice on the North Carolina Supreme Court and a self-described “Never Trumper” Republican who supports Timmons-Goodson.

“It’s just grossly disrespectful to the court system for these sorts of ads to be run,” he said.

“Judge Softie opposed putting tracking bracelets on sex offenders because it would ‘add to their shame.’”

Timmons-Goodson was on the state Supreme Court 10 years ago when she dissented from the majority opinion that it was constitutional to use tracking devices to monitor sex offenders, even if they were convicted before the General Assembly passed laws allowing it. She argued that this violated state and federal “ex post facto” laws, which protect people from being retroactively punished when new policies outlaw or legalize certain practices.

Like the 1998 ruling, this one also took place in an appellate court, meaning that the arguments were about procedure and constitutionality rather than a judgment on sexual offenders, Mills said. The central argument of the case was whether the use of ankle bracelets and other tracking devices constituted criminal punishment.

“Dissents are based on the law, not on politics,” said former state Supreme Court Justice Robert Edmunds, who served at the same time as Timmons-Goodson.

Edmunds, a Republican, agreed that the case centered around the constitutionality of monitoring systems, and the fact that the defendants were convicted of sexually abusing minors gave the case a high profile. But he declined to comment further on the ad’s contents since he has not seen it yet and is friends with both Hudson and Timmons-Goodson.

Edmunds said he believed all his colleagues on the Supreme Court, including Timmons-Goodson, were very conscientious about setting aside their personal beliefs when it came to issuing judicial opinions, which is why he enjoyed working with them all so much.

“Just in the cases I’ve voted on, sometimes I cast a vote that, if it had been in another context, I might have voted differently outside of being a judge,” Edmunds said. “But having taken an oath to follow the law to the best of our abilities, sometimes doing that was inconsistent with what I personally felt.”

It doesn’t appear the Hudson campaign has any additional evidence to explain the ad. The campaign website doesn’t contain any other citations and we couldn’t find any other references in the ad itself.

The campaign has cited two cases that really don’t show what the campaign says. We rate the claim false.

Above, a screenshot of the Hudson campaign ad.