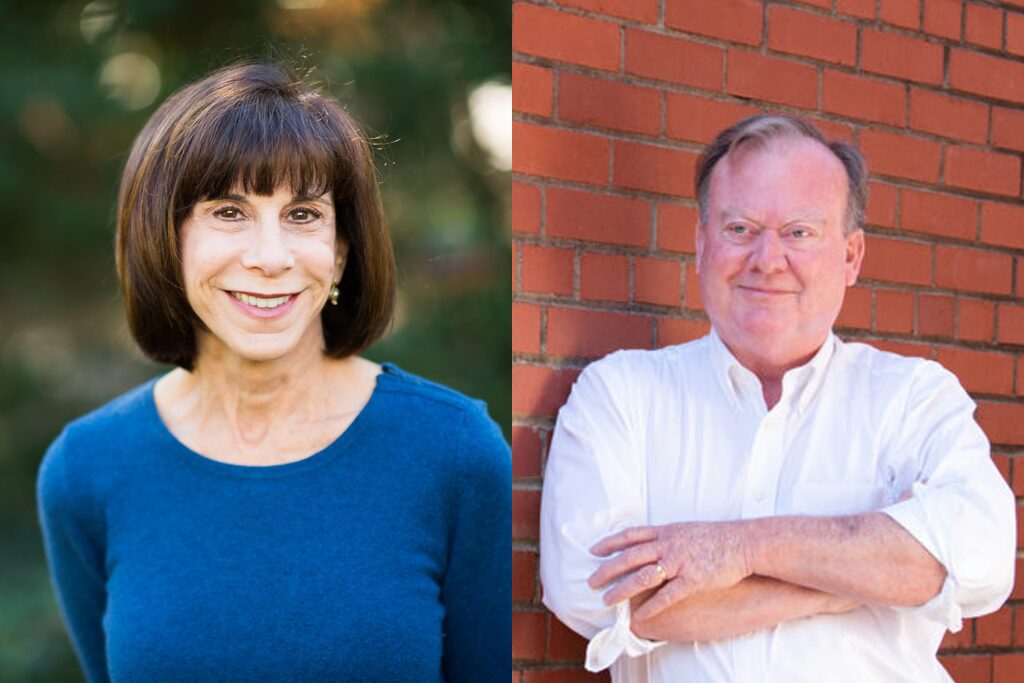 In a post on his campaign Facebook page, Lee Haywood smiles, posing neither masked nor socially distanced from Madison Cawthorn, a fellow Republican congressional candidate.

On Twitter, the Kathy Manning campaign shares a photo of Manning in a pink and green mask, standing distanced from North Carolina State Council of Machinists President Theodore McNeal.

This familiar dynamic, in which face masks have been politicized, is playing out in North Carolina’s 6th Congressional District, where Haywood and Manning face each other and a transformed electorate in the midst of a global pandemic.

The redrawn district seems to be Kathy Manning’s to lose. Republican incumbent Mark Walker declined to run for reelection after court-mandated redistricting converted the district from an amalgamation of eight counties to just Guilford County and the southeastern portion of Forsyth County. Its borders encompass Greensboro, Winston-Salem, and High Point, which make up North Carolina’s more urban, more Democratic-leaning Triad region.

In 2018, Manning lost by 6 points in her bid to unseat Ted Budd in the 13th Congressional District. This year, she emerged from a crowded primary in the 6th with nearly half of the vote — a race perhaps more competitive than the general election will be.

Manning, a former immigration lawyer, has never held public office but has emphasized her community and nonprofit work in her campaign, citing public service such as Greensboro’s Steven Tanger Center for the Performing Arts as work she will continue if she wins.

Haywood, a small business owner, also has never held public office, though he has emphasized his conservative ties instead. A self-described “constitutional conservative,” he served for the past two years as chairman of the congressional district’s Republican Party before making a leap into the election.

“I only became active in politics 10 years ago with the emergence of Barrack [sic] Obama and his vision for a radically changed America,” Haywood writes on his campaign website.

In an election cycle dominated by racial, healthcare, and economic fault lines laid bare by the coronavirus pandemic, this race has been no exception, even as both candidates largely follow party platforms.

“I’m a pragmatic person,” Manning said during a July 28 event with the Forsyth County Democratic Party. She does not support Medicare for All, the universal single-payer healthcare system advocated by progressives. Instead, she has backed a public option, in which the federal government would provide its own health insurance plan, as well as the expansion of Medicaid in North Carolina. “The most pragmatic way to get good, affordable healthcare to everybody is by building on the ACA, rather than dismantling it.”

Haywood is aligned with his party on healthcare. He has proposed overhauling the ACA for a private, free market-driven system.

Both candidates tout their small business experience as good preparation for charting the district through the pandemic and toward economic recovery. While both favor extending programs such as low-interest loans to mitigate the effects of the pandemic recession, their approaches sharply diverge for the post-pandemic future.

Haywood has stressed the need to eliminate the ballooning national debt, while Manning has leaned on past work in the Triad as evidence of her ability to guide long-term economic development.

The new district lines are unkind to Haywood and Republicans at large. Barring a major gaffe by Manning or a statewide red wave, he is considered a long shot in the now blue district. In Guilford County, Hillary Clinton won by almost 20 points in 2016; she won Forsyth by more than 10 points. In both counties, about three-times as many Democrats as Republicans turned out in this year’s primary.

“It’s nice to have a district that reflects the electorate finally,” State Rep. Pricey Harrison (D-Greensboro) said. “Guilford’s pretty blue, and we haven’t had a Democratic representative in a long time. I think it’s going to be good to have somebody that reflects more of our values.”

The newly drawn political landscape has led pundits to forecast a Manning win. The Cook Political Report rates the district as “likely Democratic,” and Larry Sabato’s Crystal Ball rates it as “safe Democratic.”

Beyond the new map, Haywood faces a name recognition problem — compounded by his lack of incumbency, Manning’s 2018 race, and a pandemic that has stifled traditional avenues of voter outreach — which his campaign is trying to solve by positioning Haywood alongside Donald Trump.

“To embrace the president, given the president’s relatively low approval rating, is certainly a strategy if you want to maximize turnout amongst people who like the president. But there’s just not enough of those folks [in the district],” David Holian, a political scientist at UNC Greensboro, said, adding that the association might also turn out voters against the president and, in turn, Haywood.

Without his own voter base, Haywood has struggled to amass funds.

From the start of the campaign up to the most recent Federal Election Commission filing on June 30, the Haywood campaign has raised just over $15,000, with about $7,000 cash on hand. Almost all contributions to the campaign have been made by individuals, save a $1,000 one by the Greater Greensboro Republican Women’s Club and $200 from a committee for B.J. Barnes, Summerfield mayor.

The Manning campaign has raised almost 100 times more — $1.4 million, with about $300,000 cash on hand. More than 85% of the total fundraising amount is from individual contributions.

“My opponent is a very rich limousine liberal, and I have a very profound monetary disadvantage,” Haywood said during a June 11 event with the Forsyth County Republican Party, sandwiched between asks for donations.

Mac McCorkle, a public policy professor at Duke, said that the disparity reflected the likely outcome.

“This is seen as a Democratic victory. The Republican forces are probably not encouraging people to waste money on this race,” he said.

The lack of institutional and party backing, coupled with a redrawing that has compacted the district around a strong Democratic base, will be difficult for Haywood to overcome.

“It’s like trying to reverse political gravity,” McCorkle said. “Subject to some major change, all the vectors are pointing in one direction — that it’s a blowout.”

At top, candidates Kathy Manning and Lee Haywood. (Photos from their campaigns)