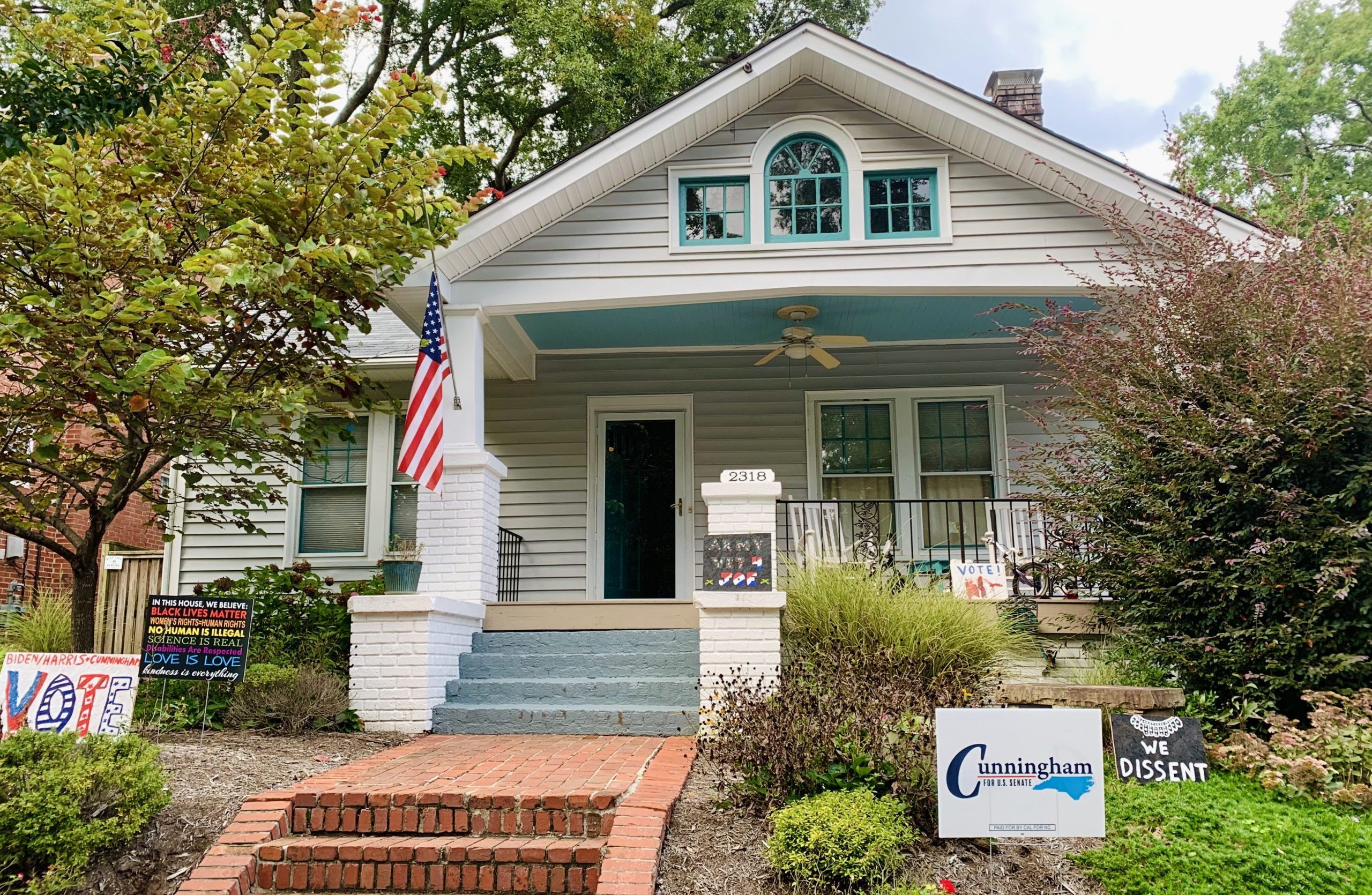 This close to Election Day, Erin Gallagher displays an official sign for Democratic Senate challenger Cal Cunningham alongside homemade messages on her front lawn. Gallagher, her husband, Jason, and their two sons, 3 and 6, painted plywood with bright acrylic paint to show support for blue candidates and causes.

“It’s kind of cathartic as we’re doing other things that are hopefully going to turn the tide,” Gallagher, 40, said from her front porch. “Hopefully, these are catching some eyes at least, or reminding people that it’s happening.”

Walking around the Watts Hospital-Hillandale neighborhood, it doesn’t seem like people need the reminder. Neighbors sport signage for Democratic candidates up and down the ballot. The occasional splash of red breaks from President Donald Trump. “I may be a Republican but I’m no fool / Biden 2020,” one sign read.

It’s no secret Durham is one of the bluest regions in North Carolina. In the last four presidential elections, Durham County saw the highest proportion of Democratic votes out of any county in the state. In 2016, Democratic nominee Hillary Clinton won Durham County with 77.66% of the vote but lost North Carolina with 46.17% overall.

Traditionally, lawn signs have been thought to increase name recognition and measure a candidate’s viability. In a place like Durham, where most residents already agree, what purpose do they serve anyway?

“Lots of signs along the roadways suggest a groundswell of public support (real or not),” Larry Sabato, director of the University of Virginia’s Center for Politics, wrote in an email exchange. “We are herd animals to some degree, and we want to be on the winning side.”

A 2016 study tested the lawn-sign effect with randomized field experiments in upstate New York, Virginia and Pennsylvania. Researchers found that the presence of lawn signs may increase a candidate’s voter share by a margin of 1.7%. That modest boost could make a difference in elections decided by a percentage point or two — not a rare occurrence in a closely divided swing state like North Carolina.

Still, the researchers say yard signs alone are not enough to score at the polls.

“It’s a tool in the arsenal of a candidate to be able to get their name out, but it is not the silver bullet to win a campaign,” Brandon Lenoir, a co-author of the study and political science professor at High Point University, said in an interview.

Lenoir and colleagues found that campaign signs don’t seem to increase voter turnout. For a place like Durham, which heavily aligns with one party, turnout is the primary issue because it determines how much influence residents have in statewide elections.

Local campaigns seem to understand the limits of lawn signs. “We actually made the decision not to do yard signs months ago,” said Sarah Ansbrow, campaign manager for Jenna Wadsworth, the Democrat running for state agriculture commissioner. “Given fundraising constraints because of COVID, we opted to use money raised on forms of direct voter contact instead.”

Durham Republicans have additional concerns with yard signs. They don’t stay where they are placed, they say. “Routinely, Republican signs are stolen or defaced in many areas of the county. Private citizens have their campaign signs stolen out of their front yard,” Immanuel Jarvis, the county Republican chairman, wrote in an email.

That can be a blue problem too. Beverly Tucker, 66, answered her door in a black T-shirt with the words “Make Racism Wrong Again” printed in block letters. She flies the American flag next to her door upside down to signify her belief that the country is in a state of distress. In 2017, a sign in her lawn opposing Trump was burned to the ground, she said.

“You may not like the fact that I’ve got these yard signs … But that’s my right,” Tucker said. “We can have a civilized conversation about it. But don’t harm me, my property, or anybody else’s.”

When a sign is stolen or destroyed, Tucker said she swiftly replaces it with another that expresses her beliefs.

Yard signs are not only a medium for personal expression, but also a way to connect with neighbors. Lenoir, the researcher, describes this as a “solidarity” effect. “It’s a way for the neighbors to say, ‘Hey, I’m like you, I have the same sign.’”

The 2020 election has many people on edge. The coronavirus pandemic has created concerns about the safety of voting in person and not everyone is confident their mail-in ballots will get counted. Recently, both the president and incumbent Republican North Carolina Sen. Thom Tillis tested positive for COVID-19. Meanwhile, Cunningham is facing a hiccup in his race after admitting to sending extramarital texts.

In such a chaotic and anxious election cycle, perhaps lawn signs are less about influencing the election, and more about expression and community, said one local politician.

“Often, in Durham, these signs are a way of proclaiming solidarity with the righteous movements for justice in our society,” Durham Mayor Steve Schewel said. “They encourage, stand proud, signify support for the welcoming, justice-seeking community that Durham seeks to be.”

Hannah Miao can be reached at hannah.miao@duke.edu