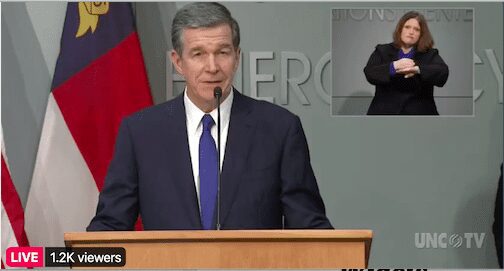 Amidst mounting pressure from the health care industry, Gov. Roy Cooper declared a statewide stay-at-home order Friday to slow the spread of the coronavirus. The measure goes live Monday at 5 p.m.

“We have to act now in the safest, smartest way while we have the chance to save lives. It is truly a matter of life and death,” Cooper said Friday afternoon.

North Carolina is at least the 24th state to have declared such an order as of Friday afternoon. The state order will take precedence over local orders if they conflict and if local orders are less restrictive, Cooper said.

The order is similar to others nationwide in that it requires people to stay at home unless they leave for approved reasons. Those include trips for essential supplies, for health care, essential work and outdoor exercise.

Grocery stores, pharmacies, and restaurants offering takeout, drive-through and delivery only can remain open in the statewide order. It bans gatherings of more than 10 people and calls for social distancing.

The move comes after hospital lobbying group N.C. Health Care Association wrote to Cooper Monday urging such a policy to slow the spread of the coronavirus, which may prevent the health care system from being overwhelmed by a large influx of COVID-19 cases.

The virus is spreading in North Carolina, although due to limited testing, its true reach here is unknown.

On Monday, the state reported 297 confirmed cases of the virus but by Friday had confirmed nearly 800, Cooper said. The Centers for Disease Control has deemed North Carolina has reached “widespread transmission,” he added.

Cooper, whose tone was measured during his press conference, said that he hopes people will voluntarily follow the order and remember “the good part of our lives as North Carolinians will return.”

He is asking law enforcement to encourage people to abide by the order, he said. If people “continually and flagrantly” violate the order, the governor stressed, authorities will prosecute.

“This is a serious order and we want people to follow it,” Cooper said.

In addition to a $2 trillion federal stimulus package passed by by Congress on  Friday, Cooper has made moves to soften the economic fallout from efforts to control the virus.

The governor expressed concern about how long it might take for federal relief for small businesses and said he wished more money was distributed to states and municipalities.

On the state level, Cooper made unemployment benefits easier to get in a March 17 executive order, a move which has triggered more than 200,000 unemployment claims statewide, most citing the pandemic, he said.

“This order may lead to even more hardship and heartache,” Cooper acknowledged. “ It might mean you’re isolated or you lost your job. That’s difficult, so thank you for doing the right thing.”