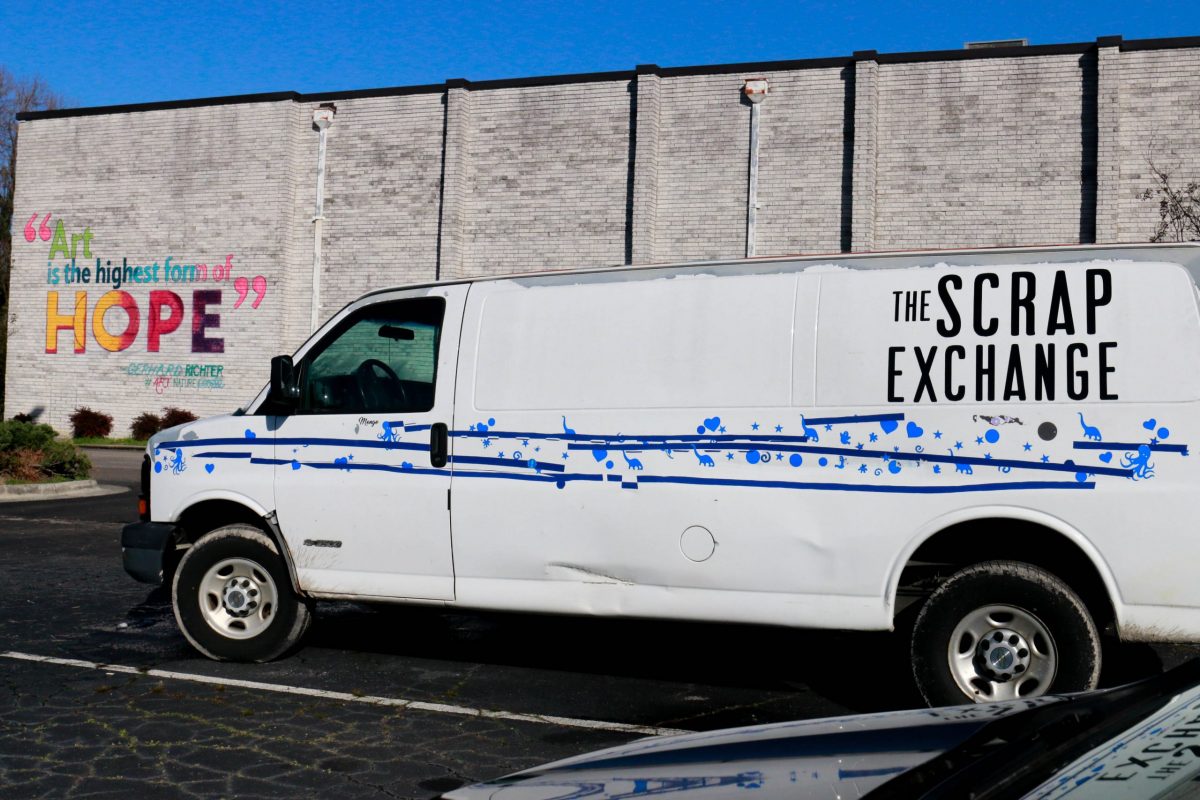 When the Scrap Exchange moved into Durham’s Lakewood Shopping Center in 2014, the mall had fallen far from its days in the 1960s as a hotspot for shopping, swimming and skating. Buildings were empty and in disrepair.

The nonprofit — which promotes reuse by selling items and materials that might otherwise end up in a landfill — made its new home in an abandoned movie theater. It has spent six years working to bring life back to the area.

Now, Ann Woodward, a longtime Scrap Exchange employee, has an even more ambitious vision: a project called the Reuse Arts District (RAD), which she is spearheading on her own.

Led by Woodward and established as a separate nonprofit by the Scrap Exchange, RAD will be a community hub with eight reuse arts programs, nonprofits and shops, affordable housing units, community gardens, a sculpture park, a basketball court, a skateboard park and a playground.

The nonprofit has raised tens of millions of dollars for the project, which is progressing but not moving as quickly as Scrap Exchange originally envisioned.

When completed, RAD is expected to create 25 full-time jobs with benefits. The organization has partnered with nine local agencies, some of which manage employment re-entry programs for veterans, formerly incarcerated people and seniors. The hope is for many employees to live in the affordable housing units that will eventually be built on the property.

“Creating a space where everyone can live, work, play, shop, recreate, be comfortable going outside—that’s what we’re working towards,” Woodward said.

Since its founding in 1991, the Scrap Exchange has hosted countless community meet-up programs, school field trips and workshops about how to reuse materials for both art and everyday purposes.

The Scrap Exchange says it saves 167 tons of the 11 million tons of waste generated in North Carolina from going to landfills each year. By adding the eight new reuse arts programs—a music production studio, a Recycle-A-Bicycle shop, an architectural salvage spot to resell construction waste—the organization expects that number to grow significantly.

RAD will reuse the buildings in the shopping center rather tearing down and rebuilding new. The organization has faced some criticism from residents who claim the project will gentrify the area. Woodward disagrees.

“If you move into an abandoned location, you are revitalizing, you are not kicking anybody out,” she said. “I look at the high-rise retail things that are going up all over Durham — like, that’s gentrification.”

Woodward added that the model for development is designed “to help stabilize communities” through neighborhood integration, job creation and quality affordable housing for people in Durham who are making less $12.28 an hour, the city’s living wage, including those who work for the Scrap Exchange and its neighbors.

But the project is slow-moving. The first phase of the plan was to lease 105,000 square feet of the mall to tenants who fit the family-friendly vision of the space by 2017.

The expected completion date, however, was pushed back to the end of 2020 because of the time it’s taken to find the right tenants.

RAD has secured leases for all but two of its biggest properties and plans to finalize those this year. Woodward said she rejected multiple applicants, like tobacco or gambling shops, in favor of waiting for more community-focused tenants like El Futuro, a mental health facility for Latino families, a craft store, a food pantry, a music hall and a thrift store.

“I feel like we have a really good mix of social services and some for-profit businesses as well [that are] related to the arts,” Woodward said.

The second phase is fundraising and planning for the housing and commercial development on the property. Though the RAD has had a community garden since 2015, other community amenities are lacking.

According to Woodward, RAD still needs to look for a majority of their project partners before plans are more concrete.

The Scrap Exchange got a $2.5 million loan from the North Carolina Community Development Initiative Capital, which funds community development, and is conducting a feasibility study for the project until 2021 to see how much more funding is necessary. The project also has a $1 million loan from Duke University and $6.2 million in loans from nonprofit lender Self Help Ventures Fund.

The organization wants to ultimately raise $100 million to establish the National Center for Creative Reuse, which would function as a national hub for mentorship on how other cities can form reuse economies.

RAD has full support from the city council and mayor, which agreed to give $660,000 for affordable housing. The organization has 10 years to use the grant. The plan is to build a minimum of 33 affordable housing units, but the space allows for a total of 170 units.

“I think it could be transformative for that neighborhood,” said Durham Mayor Steve Schewel.

He added that nobody on the city council had any objections to the funding proposal. “It was very enthusiastically received.”

Top photo: The Scrap Exchange is building a community hub and affordable housing at the Lakewood Shopping Center. Photo by Corey Pilson