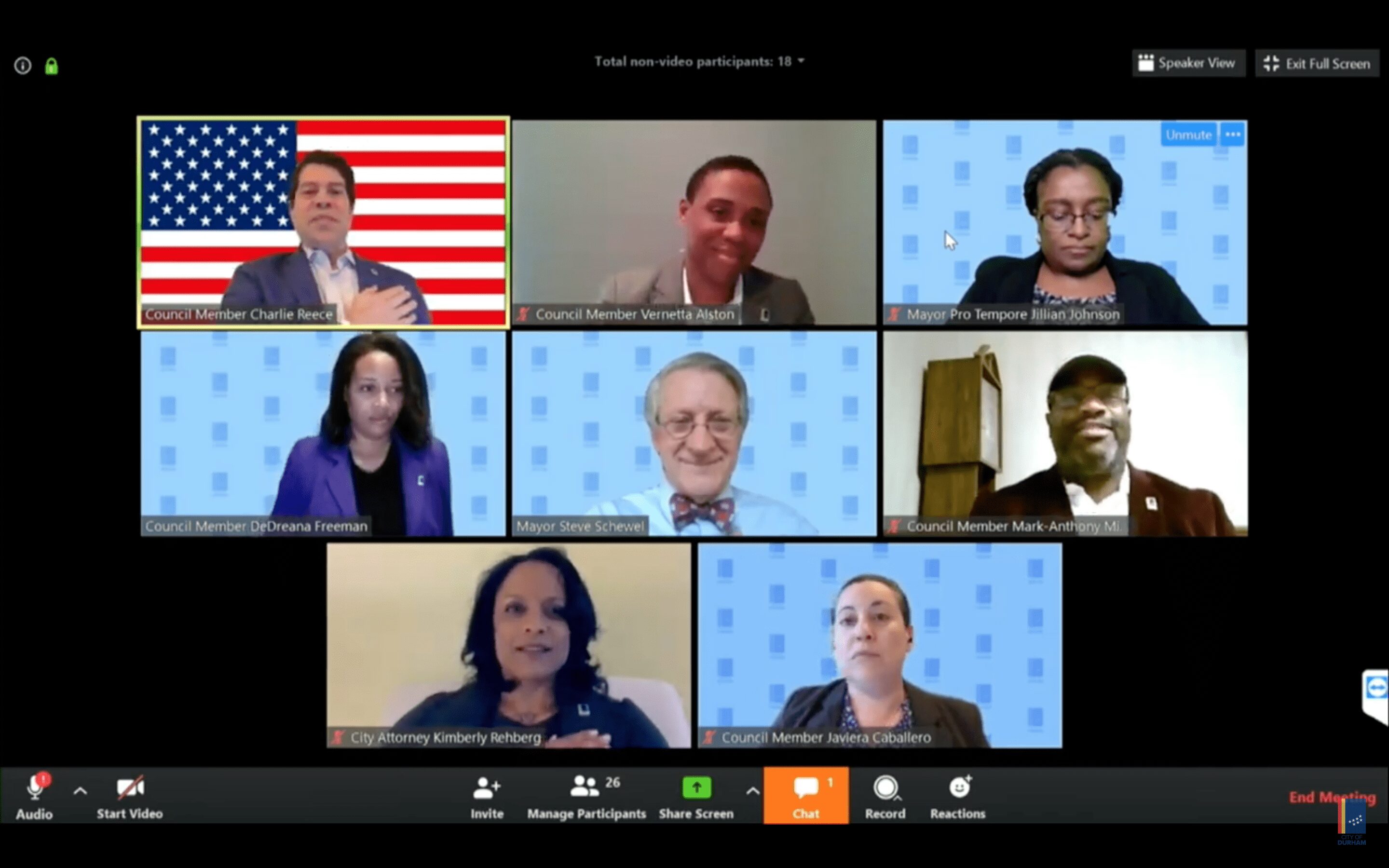 During a four-hour virtual Durham City Council meeting on Monday, Mayor Steve Schewel announced that the city is flattening the growth curve of COVID-19: The daily rate of case increases has fallen from 12% to 8%, he said.

Representatives from different sectors of the city discussed changes they have implemented to continue flattening that curve.

Multiple city officials said they have taken significant steps to reduce the spread of the coronavirus while still supporting employees and residents.

According to Durham City Manager Bo Ferguson, the city has adjusted day-to-day activities to ensure unnecessary services are suspended and employee contact remains at a minimum.

Key services still in operation include water and sewer management, litter clean-up in high use public facilities, emergency street and concrete repair and garbage and recycling pickup. Custodial services are still in place in facilities where employees are working; employees are using enhanced cleaning protocols.

Ferguson recognized the 250 city employees who are not permitted to work even though they need to.

“Some of our heroes are the ones who are sitting at home and helping us not to spread this,” he said.

Many of those who do need to work rely on public transportation.

GoDurham buses and GoDurham ACCESS have waived fares during the pandemic, according to transportation department director Sean Egan. He said the department’s workforce is receiving a 5% pay increase.

The city reduced the frequency of routes and buses stop running at 9:30 p.m. In order to reduce contact between passengers and drivers, passengers may only board using rear doors. Egan said his team has implemented more rigorous sanitation practices, including pressure washing stations and wiping vehicle interiors down with Lysol.

Drivers are not currently required to wear masks during their shifts, but some city officials expressed interest in seeing them do so.

“I would like to see our bus drivers wearing masks,” Schewel told Egan. Referencing the CDC’s recent recommendation for people to wear cloth masks in public settings, he added, “I think that is great guidance and I just worry about them so much.”

During the meeting, some speakers recognized the importance of protecting the city’s low-income and homeless people.

Durham’s Office of Emergency Services, which coordinates disaster response, has created an interagency task force to work with Durham Public Schools, which is currently providing meals to 5,500 children each day.

Colin Davis, the manager for homeless systems for the City of Durham Community Development Department, said that to prevent the virus from spreading in Durham’s homeless shelters, the department is setting up an agreement with local hotels where the medically vulnerable can stay.

Davis did not shy away from the harsh reality of the homeless community’s vulnerability. “There will be probably people who will remain unsheltered during this process,” he said.

How police are enforcing stay-at-home orders

The Durham Police Department has changed its protocols to protect officers and the public, said police chief Cerelyn Davis. Many calls about minor crimes are handled by phone rather than in person, and inquiries about COVID-19 are redirected to Durham One Call, the city’s information hotline, to avoid 911 interruption.

When speaking to residents in public — especially while monitoring social distancing — officers are supposed to use distinct verbal commands from 15 feet away and use the PA speaker system in police cars.

Davis said the police department has responded to multiple calls about residents failing to practice proper social distancing, but none have resulted in a formal citation.

Economic impacts of the coronavirus

Small businesses across the city are struggling during the pandemic.

Andre Pettigrew, director of the city’s Office of Economic and Workforce Development, said the department is working with members of Durham’s Small Business Advisory Committee to provide small business owners and employees with as much information as possible about their financial options, including unemployment insurance and Small Business Association (SBA) programs. Pettigrew and his team are disseminating information and advice through webinars and a website portal.

He said one of his biggest challenges is helping small business owners and independent contractors who do not have the required information to submit their application to the SBA for relief services.

Even those who do qualify will have difficulty reaping the benefits because of bottlenecks in the system. On April 3, its first day of operation, the SBA payroll program received applications requesting between $3 and $5 billion.

City officials are currently in talks with other large cities to project the impact COVID-19 will have on the economy. Durham’s Budget and Management Services department director Bertha Johnson said there is a projected 10% loss from sales tax alone — a significant blow to the city given that sales tax generates $71 million a year.

According to Johnson, budget development guidelines will be revised to address complications caused by the pandemic, and the city manager is scheduled to present his budget for the next financial quarter on May 18.

The council debated how to fill Alston’s seat. Council member Mark-Anthony Middleton said that instead of filling the seat in the next 30 days, it should be on the ballot this fall.

Middleton argued that the proposed time frame would be unfair to residents who, under different circumstances, would apply for the position, but are unable to due the pandemic.

“I don’t think we should create a higher bar than already exists to sit on this council for folks who may not have computer access, who would have filled out an application but are worried about unemployment right now, or are worried about bills,” he said.

However, other members of the council disagreed, citing concerns about leaving the seat open for an extended period of time. The motion to appoint a new member in 30 days passed 5-2. The application and questionnaire will go live online on April 13.