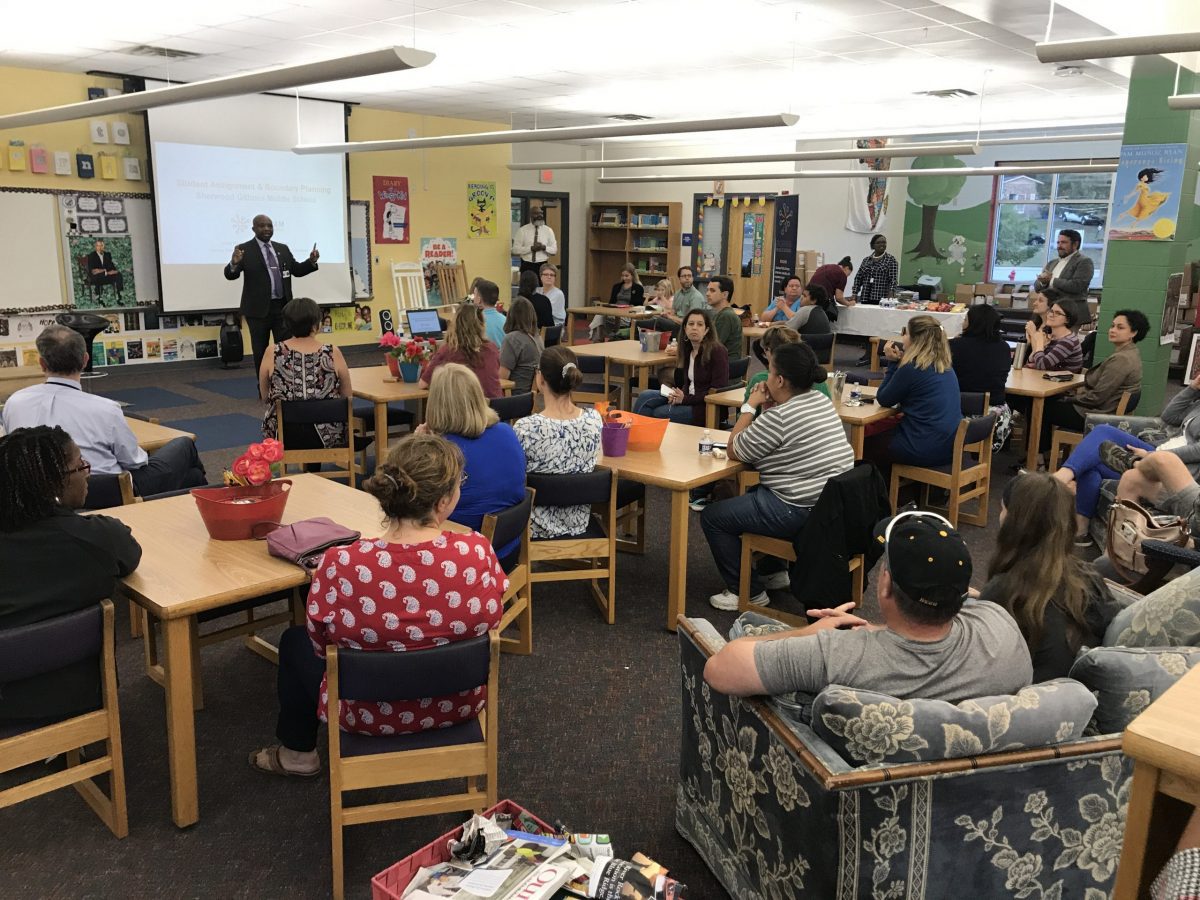 At 10 am at Creekside Elementary School cafeteria, one class begins to eat lunch as other students finish up their breakfast.

At a school that is 200 students over capacity, the Creekside cafeteria cannot fit all students at once. So the lunch cycle starts early and continues in waves until the last sit-down at 12:40 pm.

To alleviate crowded hallways and trailer park classrooms, Durham Public Schools is redrawing the student boundary maps for Creekside and Githens Middle School to reduce how many children can enroll at each.

Lots of changes are brewing for Durham Public Schools this year and next. The district is addressing several core issues beyond overcrowding, including retaining more children in district schools, expanding access to programming and resources, and reducing class sizes.

Even though Durham County is growing — by an estimated  23,221 people from 2015 to 2020 —enrollment in district schools dropped by 698 students during that period. For one, families have more choices than ever. Parents can consider district, charter and private schools, among other options.

Along with student retention, district officials want to expand equity. In 2017 the Durham Public Schools Office of Equity Affairs opened with the mission to provide equal opportunity and experiences for all students.

The Barbershop Talk Series program, where students, administrators and parents share observations about discrimination, is one way the district is bringing disparities to the forefront.

The wider goal is to balance school demographics to ensure that students of all races and income levels share the best of school resources, from lower teacher to student ratios to the length of school bus rides and classroom supplies.

Overcrowding at Creekside impacts all corners, from the cafeteria to art classrooms. Due to the large class sizes, students are no longer able to take two year-long art and music classes. Instead, the subjects are taught in one course, said Rhonda Woodell, the Creekside PTA president.

In the parking lot, two fourth-grade classes and all fifth-grade classes meet in trailer park classrooms. Creekside also faces a challenge each year to balance the student-to-teacher ratio per grade. Some years, four first-grade teachers are needed, while other years it could be six.

“It’s been a chess game every year for administration,” said Woodellt.

Boundary reassignment sounds like a simple solution, but it is a puzzle with complex pieces. Multiple factors get considered in all this planning: student enrollment, age and capacity of schools, driving distance to school, and the overarching emphasis on equity, Palmer said.

Palmer, alongside Julius Monk, chief operating officer for the district, presented their boundary change proposal for Creekside and Githens to the Durham School Board in October. Board members approved boundary shifts with a 4-3 vote in November.

To reduce enrollment at Creekside, the change will be pretty straightforward. The Parkwood Elementary School boundary will expand to accommodate more students. Families who live east of the intersection of Scott King and Herndon Road will now send their children to Parkwood instead of Creekside, which will save driving time for some.

Change at Githens requires increasing the student enrollment boundary for Brogden Middle School, which is more complex than it sounds. Six elementary schools feed into Githens and the district is considering three possible adjustments.

For the 2020-2021 school year, the average class size should be 18 students per teacher, with classrooms capped at 21 students.

That further complicates the planning process, Palmer said. “It becomes what we call a tri-level optimization. So we have to first fit the kids in the classroom, then we have to fit the classroom in the school,” he said.

Throughout the fall, DPS invited parents to Board of Education meetings and solicited feedback via surveys regarding the coming changes. Not all parents agreed with the shifts, but many recognized the complex challenges.

With plans for the construction of a new elementary school within the next few years, some parents have voiced concerns that their children could be reassigned multiple times while in elementary school.

At a public hearing in November, parent Jessica Simo asked why her children may have to switch from Creekside to Parkwood to a new school set to open within the next few years.

“This proposed plan to redistrict around 50 families seems like putting a Band-aid on an open wound for overcrowding,” she said, adding that it “might not accomplish that much other than upsetting a group of families.”

The reassignment project is a small piece in a larger puzzle and the district is doing its best to meet everyone’s needs, Palmer said.

“If you’re looking at Mount Everest, you have to have base camps as you work your way up the mountain,” he said.