Home » A Durham Moment: “We are standing here today to say, ‘never again’” 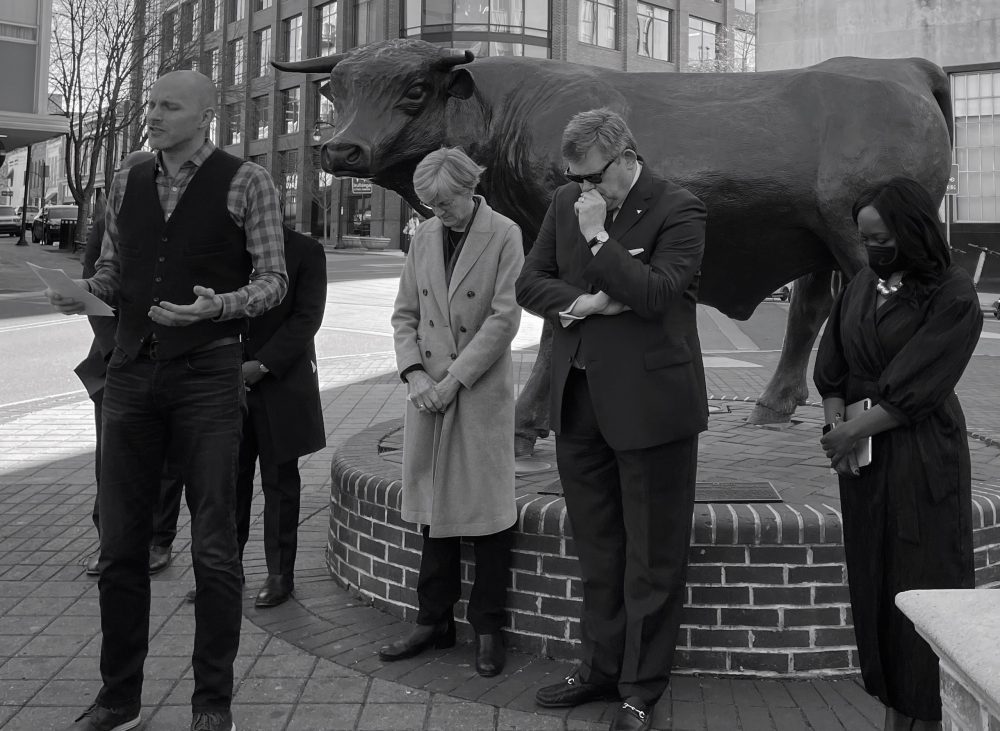 A Durham Moment: “We are standing here today to say, ‘never again’”

January means many things – the start of a new year, the sight of discarded Christmas trees and lists of resolutions about what’s ahead. But as the lights came down from the 45-ft Christmas tree at the CCB Plaza in downtown Durham on Thursday, a nearby vigil signified a different meaning for this month: the anniversary of the insurrection at the Capitol one year ago on January 6, 2021.

Over 200 miles away from the Capitol, Durham’s legislative delegation gathered at noon in the shadow of the Major the Bull statue to pay tribute to the lives lost on that day in Washington, D.C.

Morey, who helped organize the event, stressed the importance of upholding the principles of democracy one year later.

As passersby joined the modest crowd gathered on their lunch break, Ben Haas from the Religious Coalition for a Nonviolent Durham opened the vigil by leading the group in prayer. The crowd bowed their heads as Haas began, with Mayor Elaine O’Neil and Durham County Commissioner Wendy Jacobs, who were both in attendance, joining in.

Vigils are familiar spaces for Haas, who has helped to commemorate homicide victims across Durham. His prayer emphasized the loss of love and human life as a result of the Jan. 6 insurrection.

“Peace, justice, love and hope bind us together,” he said.

One by one, members of the Durham delegation stepped forward to speak. Some citizens stopped to listen while walking their dogs. Others rode bikes to the plaza for the event, with helmets decorated with Durham’s signature sticker, “No bull, I voted.”

Beyond the theme of remembrance, one message in the speeches prevailed: the importance of voting rights.

Eliminating barriers to the ballot box and registering people to vote are small things that can lead to a big win, he said.

Rep. Natalie Murdock echoed Hawkins, noting that the right to vote is a basic tenet of democracy. She called for Congress to pass the Freedom to Vote Act, Protecting Our Democracy Act and the John Lewis Voting Rights Act.

“We have the numbers in the Senate, it’s time for us to get this done,” she said.

In a pandemic-era gathering, masks sported messages of support. One attendee wore a black mask with white lettering spelling out “Vote.”

State Sen. Mike Woodward left the crowd with three suggestions of ways to move forward: call the events of January 6 an insurrection, remember what happened and help turn out the vote.

“The fight for freedom begins anew every morning,” he said.

As the event ended and the crowd began to disperse, Morey put on her own mask to greet attendees. It, too, bore a simple message: “Do good.”

Above, Ben Haas of the Religious Coalition for a Nonviolent Durham opens the vigil with a prayer. Photo by Michaela Towfighi – The 9th Street Journal