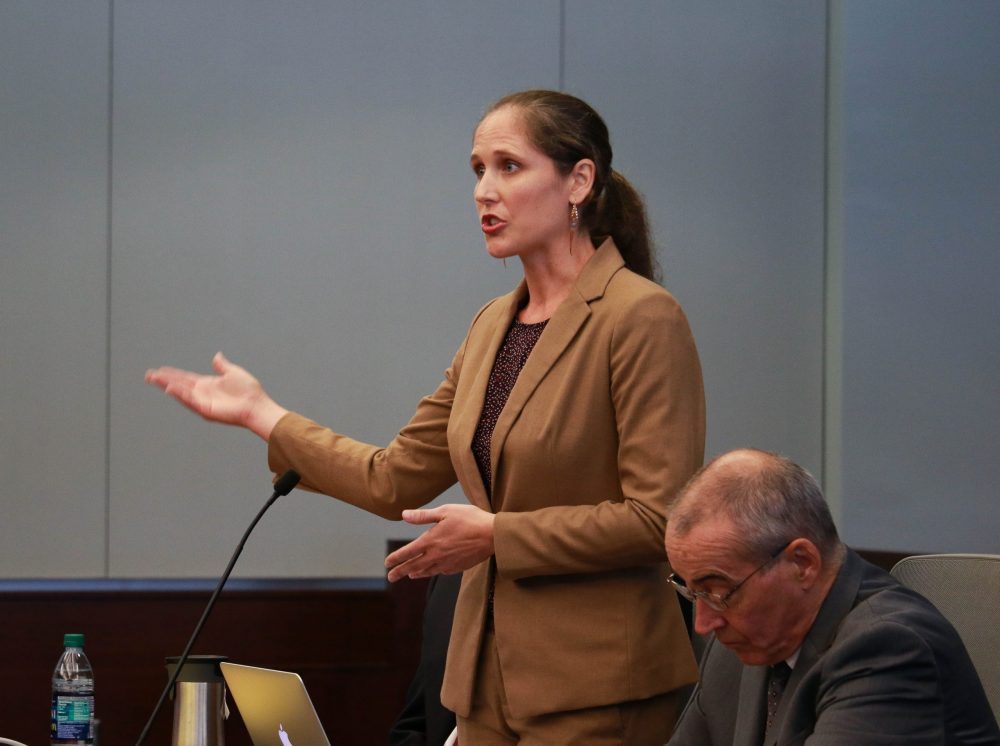 A defense attorney has leveled a new allegation that prosecutors made serious missteps in the case against Alexander Bishop, a Durham teenager accused of killing his wealthy father, Bill Bishop.

Sharp filed a motion in December asking that Deberry, Assistant District Attorney Elizabeth Hopkins Thomas, and lead police investigator Tony Huelsman be held in contempt for failing to comply with their discovery order.

“The District Attorney’s repeated misrepresentations to this Court make clear that the District Attorney’s violations of her obligations and abuses of her authority have been willful and in bad faith,” Sharp wrote in the filing. Being held in contempt could mean up to six months in prison, censure, and fines up to $500, according to North Carolina law.

Sharp prevailed the last time she filed a motion with accusations of misconduct. In October, Judge Orlando F. Hudson Jr. tossed swaths of key evidence after he found that Huelsman made false statements or ones in “reckless disregard of the truth,” and even accused him of “invent[ing] facts.”

Asked about Sharp’s new motion, Durham District Attorney spokesperson Sarah Willets said the office is “committed” to meeting its obligation to turn over evidence in the case and has “made no declaration that discovery in this case is complete,” she told the 9th Street Journal.

Willets declined to comment further on the motion. No date for a hearing on the motion has been set, she said.

Bill Bishop, a real estate developer, was found in his Hope Valley home with a dog leash wrapped around his neck in April 2018, his son claimed. Police quickly focused on Alexander, and the teenager was charged with killing Bill in February 2019. Alexander’s attorneys then filed a routine request for discovery, a process in which the defense receives evidence from the prosecution.

But the teenager’s attorneys contend there were many things missing when they received the evidence. So in April 2019, the Superior Court directed Sharp to provide prosecutors with a list of the 33 “missing or incomplete” items, the filing says. But nearly a month later, Alexander’s attorneys said they had received none of the items.

Among the missing evidence: footage from police body cameras. And when the defense received footage on May 9, 2019, they say they received 15 of the 19 recordings it had requested.

Sharp asked for the missing videos. Instead, she got four copies of videos she had already received. It took another email to get the correct missing videos.

They ended up being important in the case. They showed a conversation between Alexander and a Durham firefighter that Hudson later ruled Huelsman had misrepresented in his search warrants.

Sharp wrote in the new filing that “it is evident that the District Attorney and/or Investigator Huelsman are deliberately withholding evidence which they know undermines the State’s case, providing items only after they are specifically identified as missing by undersigned counsel, and even then refusing to provide items which clearly contradict Investigator Huelsman’s sworn statements.”

Some of the missing evidence from discovery was correspondence between Bill’s ex-girlfriend, Julie Seel, and Huelsman.

Another missing item: information from Bill’s laptop, which Sharp complained about in a May motion for discovery sanctions.

Sharp also alleged that Deberry “destroyed” evidence in the discovery process by changing Huelsman’s titles of documents to new ones that were “often false or misleading.”

Sharp accused Huelsman of perjury after testifying in September that he turned over a complete file when he had in fact not. Hopkins-Thomas, an assistant district attorney, knew he was not telling the truth and had an “ethical obligation” to tell the court and did not, Sharp argued.

Hudson ordered Deberry to produce “complete discovery files” within two weeks in September. They have not yet been provided, Sharp wrote in the Dec. 17 motion.

Other ‘misrepresentations’ and ‘abuses of authority’

Another complaint centers on the “missing gold” in the case. When Alexander was indicted for murder, a judge deemed him to be a flight risk and sealed the indictment based on Huelsman’s claims of missing gold from Bill that seemed to be a possible motive. But the gold was not, in fact, missing.

Sharp also seemingly called into question the sincerity of Huelsman’s belief that Alexander was a flight risk. She said Huelsman waited several days to arrest Alexander after the court sealed the indictment and then arrested him on a Friday so he had to spend the weekend in jail before his first appearance.

Sharp also accused Deberry of using her powers as prosecutor to shop for an inexperienced judge and waiting to tell Alexander’s defense team. She said Deberry failed to put Alexander’s first appearance on the calendar and then sent it to a “visiting, newly-elected judge.” A courthouse deputy had told Sharp that Hopkins-Thomas informed them to bring Alexander’s case to the courtroom where the new judge was, not to Hudson, a veteran judge.

In that courtroom, several media cameras were already put up, indicating that Deberry had told the media — and not Sharp — where Alexander’s court appearance would be. But Hudson switched courtrooms to take the hearing.

Overall, Sharp argued Deberry did all of these things to slow down the case and damage Alexander’s defense.

“The District Attorney has made material misrepresentations to this Court; filed frivolous motions; delayed service of filed noticed and motions and committed repeated frauds upon this Court by certifying otherwise; and abused her calendaring authority with regard to the scheduling of motions in this Court, all in her continuous efforts to delay this case and to prejudice Alexander’s defense.”