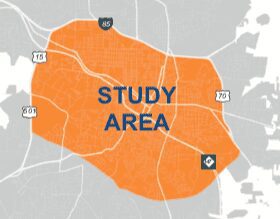 On a mission to improve transportation downtown, Durham officials are experimenting with an emerging method to trace where and how people move.

They are buying location data harvested from smartphones and navigation devices.

Many owners of those devices are likely unaware that their movements create such data or that it is collected and sold to help a city eager to unclog its downtown.

In November 2018 the city announced Move Durham, a study to analyze today’s transportation downtown, forecast future needs and suggest how to keep people moving with vehicles, public transit, bikes and on foot.

Move Durham, funded with $400,000 in multiple grants, is contracting with StreetLight Data of California to buy data originating with GPS systems and potentially hundreds of smartphone apps, including weather, dating and exercise software.

As of July 2018, Streetlight Data reported that it collects and processes location records from more than 65 million adults in the U.S. and Canada. It can show where people start and end trips and how fast they moved — a good indication of whether they walked, biked or drove.

“Having information like this that’s quicker and more up-to-date is very useful,” Beckmann said.

A Duke privacy expert expressed some concern about the data collection process used by the location-data industry.

Apps and GPS systems don’t make it obvious that they both collect and sell the location data they capture, said Jolynn Dellinger, a senior lecturing fellow at Duke Law School who specializes in data privacy issues.

Most users “don’t know how much a phone can collect on them,” she said. And there are currently no laws governing what private companies like StreetLight can do with the location data after they purchase it, Dellinger added.

Alta Planning and Design — a transportation firm that specializes in streamlining city travel— favored hiring StreetLight Data. After winning a public contract to collect and analyze data for the city, Alta staff realized that using traditional traffic counters would take too long and was inefficient, according to Jennifer Baldwin, a senior planning associate with Alta.

While those working on the project initially were concerned about privacy issues with such data, Baldwin said she was reassured that individuals’ privacy would be secured by StreetLight’s data protection policies. To safeguard personal information, StreetLight Data purchases anonymized records, which replaces names with random strings of digits.

On StreetLight Data’s website, the company does note that it can associate a “likely home location” to a device, even linking “income distribution” and other demographic factors to a person’s phone.

That said, data provided to Durham will not include a view of individual homes, said Kaleb Osagie, a StreetLight sales representative. If a user wants to see data from a zone with only one house, “the platform will let you know that this project is too specific,” Osagie said.

Durham needs a transportation study due to recent growth downtown, says Move Durham’s website. That includes more than $1.2 billion of investment since 2000.

That resulting building boom has made parking tougher and more expensive, which may make  park-and-ride lots and bus transit service potentially more attractive. At the same time, central Durham residents are asking for more walking routes, room for bicycles and less traffic through residential areas.

In Phase 1, Move Durham circulated surveys and staged community meetings to hear what problems people were experiencing as they  move around downtown.

The project has only just begun to use StreetLight data, Baldwin said. The data will become more helpful during Phase 2 of the Move Durham project, where analysts will narrow their focus to problem routes that the public helped identify.

That’s when Durham will get into the “nitty gritty” of the data, she said.