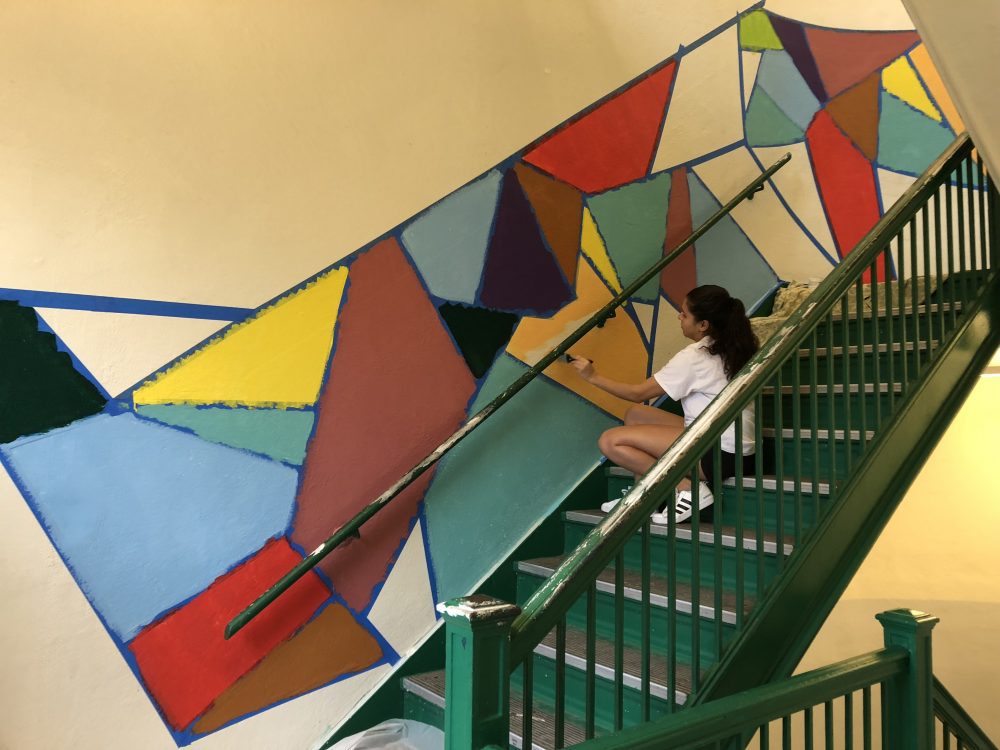 In another flip, Hopkins asked the group of 33 volunteers to teach him. He wanted their thoughts on what they liked or did not like when they wandered down halls and into classrooms.

State rankings may describe Lakewood as low-performing, but Hopkins stressed that the school has many strengths and is only getting stronger. “Your feedback is going to prove invaluable,” Hopkins told the volunteers.

Bull City Classrooms regularly organizes such volunteer blitz sessions for people eager to help Durham public schools. Every other Saturday, the nonprofit tries to dispatch at least 20 helpers to an elementary school.

At the schools, volunteers tackle whatever those who work there say needs to get done: cleaning closets, picking up trash, painting stairwells or brainstorming.

“We don’t have an agenda,” said Anish Simhal, a Duke University graduate student who founded the project nearly a year ago. “We are just here to help with whatever teachers and principals need. There’s nothing else to it.”

With Bull City Classrooms, he is using an “economy-style” approach to help others help kids in short bursts, just two hours at a time.

Simhal jumped into this because he considers supporting education a pressing community need and wanted to help address it. His group’s website explains it this way: “We believe education is one of the most important facets of a growing community and that our teachers are overworked and underpaid. We can’t solve the latter of the two, but we can help with the first.”

Simhal came up with Bull City Classrooms after noticing barriers to volunteering in Durham Public Schools, such as registering for time-consuming background checks when working directly with students and the difficulty many people have committing their time during the work day.

“It’s hard for someone who is new to the Durham community to volunteer in a public school because you can’t just show up and knock on an elementary school and say, ‘Hey, I’d like to help’,” Simhal said.

At Lakewood, principal Hopkins described the volunteer session last Saturday as “a bit unconventional.” First, he asked volunteers to be his “free focus group” for an hour.

“What I want you to do is to just walk the school and just observe things,” Hopkins instructed. “Look as if it’s a museum.”

The group of mostly Duke physician assistant students studied hallway posters questioning the ethics of zoos and describing the arrival of the Mayflower. They saw uplifting notes from teachers on classroom whiteboards encouraging students to behave for substitutes. They examined signs promising students a visit to the Sky Zone, a Durham trampoline park, for passing a test.

Cut-out construction paper letters in one hallway spelled out an inspirational quote often attributed to Albert Einstein. “Everyone is smart in different ways. But if you judge a fish by its ability to climb a tree, it will live its whole life believing that it is stupid.”

When the volunteers reconvened in the library to discuss the school, Hopkins directed them to use their Smartphones to fill out a Google Forms questionnaire. “What would you say we value and/or prioritize?” it asked. “What stood out to you?” “What do you believe distinguishes a good school from a great school?”

Discussing their responses, volunteers recalled experiences from their childhood that Lakewood Elementary School might incorporate. The privilege of eating lunch with their principal was one. Having teachers who accommodated different learning styles and becoming friends with cafeteria and custodial staff were others.

When volunteers wrapped up their brainstorming, Simhal handed out blue nitrile gloves and transparent trash bags so volunteers could clean up litter around the school.

Outside they collected trash, including packaging from Cheddar Jalapeños Crunchy Cheetos and Dannon Danimals Yogurts, litter that hadn’t made it to trash cans.

Duke mechanical engineering doctoral student Hadiya Harrigan was a repeat helper, signing up for the Lakewood session after enjoying a session at another school where she and others painted stairwells. “I think that it is really important to give back the the schools,” she said.

Getting repeat volunteers like Harrigan will help Simhal. Bull City Classrooms has held 12 events so far at schools including Eastway, E.K. Powe, and Merrick-Moore elementary schools. One day, he wants to organize that many in one week.

Interest was high enough the weekend before Martin Luther King Day, when many people seek out community service, that Simhal could have held three different events.

Hopkins, the Lakewood principal, said he appreciates the program and would recommend it to his fellow Durham Public Schools principals.

“We are in Anish’s debt. He reached out and said, ‘Hey, can I come with some people to help?’ Hopkins said. “A fool would say ‘no’.”