Home » In the Clerk’s Courtroom, a tender scene of love and the law 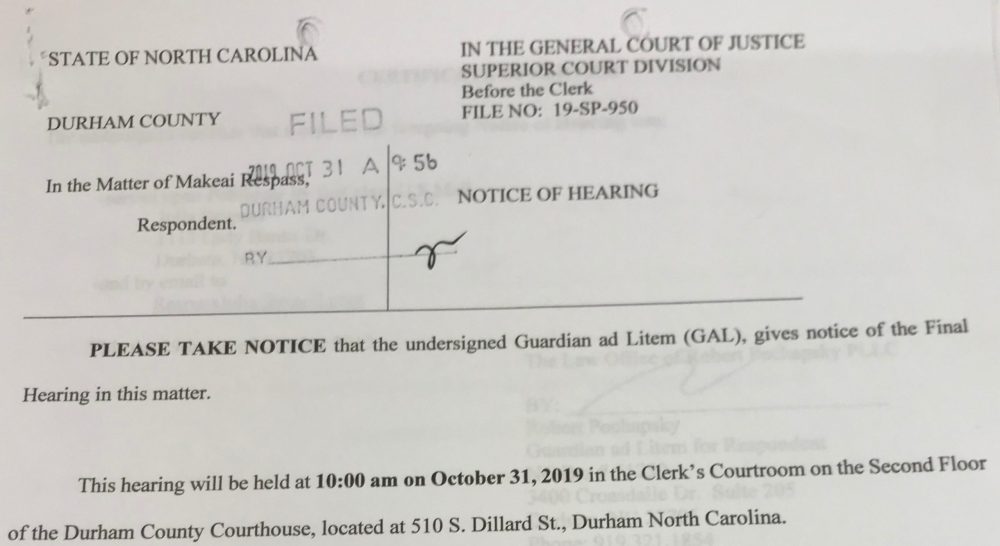 In the Clerk’s Courtroom, a tender scene of love and the law

Attorney Rob Pochapsky leans over to whisper in Makeai Respass’s ear. It’s 10 a.m. on a Thursday morning, and the sun is shining on them from a window in the Clerk’s Courtroom at the Durham courthouse.

“Are you nervous at all?” Pochapsky asks.

“No,” Makeai says. She has short brown hair and wears glasses with plastic frames that are somewhere between purple and blue.

“I presume people have more going on upstairs than they show,” Pochapsky replies.

Because she has turned 18, Makeai is now responsible to manage her finances, property, and medical affairs. But she has autism, PTSD, Schizoaffective disorder, and seizures, so her mom has petitioned that she’s not capable to manage those affairs.

Pochapsky speaks softly to Makeai, explaining that the clerk of court will determine whether she is competent to manage her own affairs and whether her mom should become her legal guardian.

“(The clerk’s) name is Archie Smith,” Pochapsky says. “He’s a good man. What he does is always fair and right. If anyone gets yelled at today, it’s going to be me.”

But no one yells in court today. It’s a tender family affair.

On Tuesday and Thursday mornings, Smith oversees these little-known incompetency hearings. They occur in a room the size of an elementary school classroom with no bailiff, no court reporter, and usually only one attorney.

They’re not announced on an online calendar and even Smith said he doesn’t know who will be in court until shortly before the hearing.

Smith, the clerk of Superior Court, oversees money flow in and out of the Durham courts and serves as judge for special proceedings including guardianship, adoptions and foreclosures. A jovial man, he has a circular face and round cheeks on each side of his white moustache.

The guardianship cases – he rules on about 150 every year – range from amicable and tender, to tense and contentious. If Smith deems a person incompetent, he then determines who will become their guardian for financial or personal matters.

Some are elderly people with dementia. Others are referred from the Duke Trauma Center or the Department of Social Services. And some are people with autism who come once they reach adulthood, such as Makeai.

There’s a lot on the line: Who will be responsible for the ward’s property, their medical decisions, their finances?

Pochapsky turns to Makeai with a last note of encouragement before the proceedings.

“We’re both Leos. You know what that means? That means we’re smart, we’re strong,” Pochapsky says.

It’s not clear if she understands the reference to her astrological sign.

Smith walks into the room and sits behind his bench in front of an audience of only four.

“Today is the 31st. It’s Halloween!” he says, to diffuse any tension in the room.

In these cases, it’s up to an attorney, or guardian ad litem, to investigate whether someone is competent, who should become their guardian, and what that guardian’s responsibilities should be. Today, that’s Pochapsky.

“You are her sword and shield,” Smith reminds Pochapsky.

For Pochapsky, that means he investigates potential guardians to make sure the court appoints one who will protect Makeai and won’t exploit their guardianship responsibilities.

When the court declares someone incompetent, they lose civil rights and freedom. They may lose their privilege to drive, file a court case, or own a firearm. Pochapsky wants people like Makeai to retain as many rights as they can handle.

“Civil rights are something most people do not want to give up and shouldn’t have to unless it’s necessary. The objective is to make sure that the court orders whatever level of guardianship is necessary, but not any more,” he says after the hearing.

He also wants to make sure the guardianship responsibilities fall into the right hands. With Makeai, her mom was an easy answer. But sometimes it’s not as clear who should be the guardian — especially when it comes to finances.

In some cases, Smith watches families argue over guardianship.

“Quite often, there will be confusion as to who — siblings, children, whomever — should have control of the incompetenet ward’s finances,” Smith says. “Every possible permutation of family dynamics comes into play. Families are not as depicted in Norman Rockwell paintings — the stylized images of the peaceful, happy family.”

And Smith says that sometimes the finances end up in the wrong hands. Although he can’t predict exploitation, he’s not surprised when it happens.

“It’s the human condition. There are scoundrels out there.”

Smith says the guardianship process has to be compassionate.

“Some people I know are sharp as tacks, and they’re almost 100. But for most of us, unfortunately, we begin to decline with time. It’s our duty as human beings to love the ones who have lived with us and are starting to suffer.”

Likewise, the process protects people like Makeai who are on the autism spectrum.

Pochapsky says he strives to make sure the people he represents are comfortable. His role requires as much empathy as it does lawyering.

“I’ve had a lot of cases that involve people on the autism spectrum. It’s hard to imagine what it’s like being inside their head when they’re sitting in that courtroom. Although it looks rather innocuous to us, it’s gotta be frightening to them,” he says.

In the courtroom, after discussing the guardianship logistics, Smith looks over to Makeai.

“All right Makeai, is it all right to have your mom be your guardian?” he says.

She nods her head yes.

In a chair to the right, Julia Respass slides off her glasses and wipes away tears. Makeai looks at her mother intently and walks over. Julia Respass leans down to tie her daughter’s shoe, and then they hug.