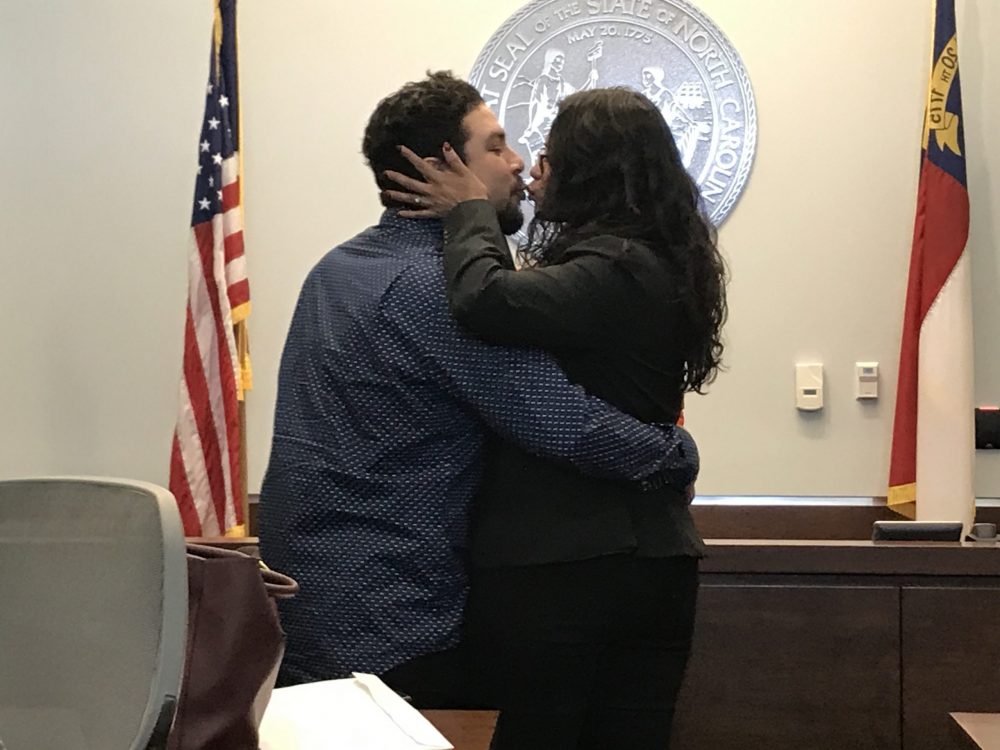 Jarinette Gonzalez and Yeison Reyes gazed into each other’s eyes and drew closer.  They had just been married by Durham County Magistrate Aminah Thompson, and Gonzalez had a big smile as their lips touched. For a wedding kiss, though, it was surprisingly short. Just a quick smooch.

Ivonne Ardon and Jose Hernandez opted for more choreography – grasping hands in a four way knot. But the kiss itself was just a peck.

And then Henry Cruz and Bessy Zaldivar. Wow. They were dressed casually, the bride all in black (a blazer and slacks plus leather booties) and Cruz in white canvas shoes and a navy button-down with fine polka dots.

But their kiss was the most spirited. They were giddy as Zaldivar put her hands on the sides of Cruz’s head and stretched her fingers into his wavy dark hair. Their puckered lips met and separated – again and again and again. Four kisses to begin their life together.

Depending on the couple, the weddings in Magistrate’s Courtroom 3 are quick or passionate or sometimes even a little nervous.

Every weekday, magistrates conduct weddings at the Durham County Courthouse. Weddings continue during the coronavirus pandemic, with ceremonies held between 11 a.m. and 12 p.m or between 2:30 p.m. and 4 p.m. Couples don’t have to sign up in advance for the ceremony. All they need is a $60 marriage license.

In the courthouse, couples can have a wedding on a whim.

Courthouse weddings are an eclectic mix – grooms wearing polka-dot shirts and brides in black. Guests capture the moment in iPhone videos and sometimes ask bystanders to act as wedding photographers. Some bring friends and relatives; others come alone.

For working-class Durham residents, courthouse weddings are efficient and inexpensive. Couples can knock venue planning, officiant selection, and the photographer search off their prenuptial to-do list.

But the couples get what they plan and pay for. Weddings last about seven minutes with no frills: no music, no procession, no sermon, and no prayer.

It is Valentine’s Day and Thompson has brightened the small, windowless magistrate’s courtroom by wearing a bright red blazer.

Reyes, 19, and Gonzalez, 23, stand shoulder-to-shoulder, ready for their vows. They met just five months ago when a mutual friend introduced them. Reyes is from Honduras, and Gonzalez is from Puerto Rico.

Gonzalez’s father Victor Gonzalez and witness Carmen Morales stand beside them, watching through iPhone screens so they can simultaneously record video and observe the vows. Gonzalez’s father lowers his iPhone camera for a moment and opens a small box. He hands Reyes a band for his bride.

As Thompson continues her scripted Spanish vows, Gonzalez holds her left hand in her right, admiring the new wedding ring.

After Thompson arrives at the “beso” part of the script – the kiss – she sits down and watches the couple smooch.

Thompson’s coworker, Magistrate Terry Fisher, says the Durham Courthouse does many of his weddings in Spanish. “I don’t know if it’s half, but we do a significant number,” he says.

Some magistrates know the entire ceremony script in Spanish, while others switch to the language only for the “to have and to hold” section.

Though English and Spanish are by far the most common languages, Fischer also remembers couples who spoke Mandarin or Vietnamese. Sometimes the couple will bring interpreters, but that’s not always the case.

“If you’re here for litigation, whatever language you speak, we can request an interpreter from the Administrative Office of the Courts,” Fisher said. “But those people are not available to us for weddings. So we just have to do the best we can.”

A delicate golden watch dangles off Ardon’s left wrist, and a new wedding band sits on her ring finger. Hernandez faces her lightly holding both her palms until Ardon raises her hand to admire the ring. Then they grasp hands in a four way knot.

Ardon tosses her head to move her bangs out of her eyes. She raises her chin and watches the magistrate say, “Puede besar a la novia.” You can kiss the bride.

They move their hands from the four-way clasp into a hug and lean in for a quick peck of the lips.

Ardon’s hand slides down Hernandez’s pale brown coat. She turns toward her audience of five, and she smiles and claps.

The couple and their friends file into the 3rd-floor hallway. They pose for a photo along a window that looks out on a cloudy downtown-Durham day. The slanted and pixelated photo is hardly picture-perfect, but it captures the community that will support Ardon and Hernandez in their new life.

In photo at top, Henry Cruz and Bessy Zaldivar embrace for their marital smooch. Photo by Kristi Sturgill | The 9th Street Journal