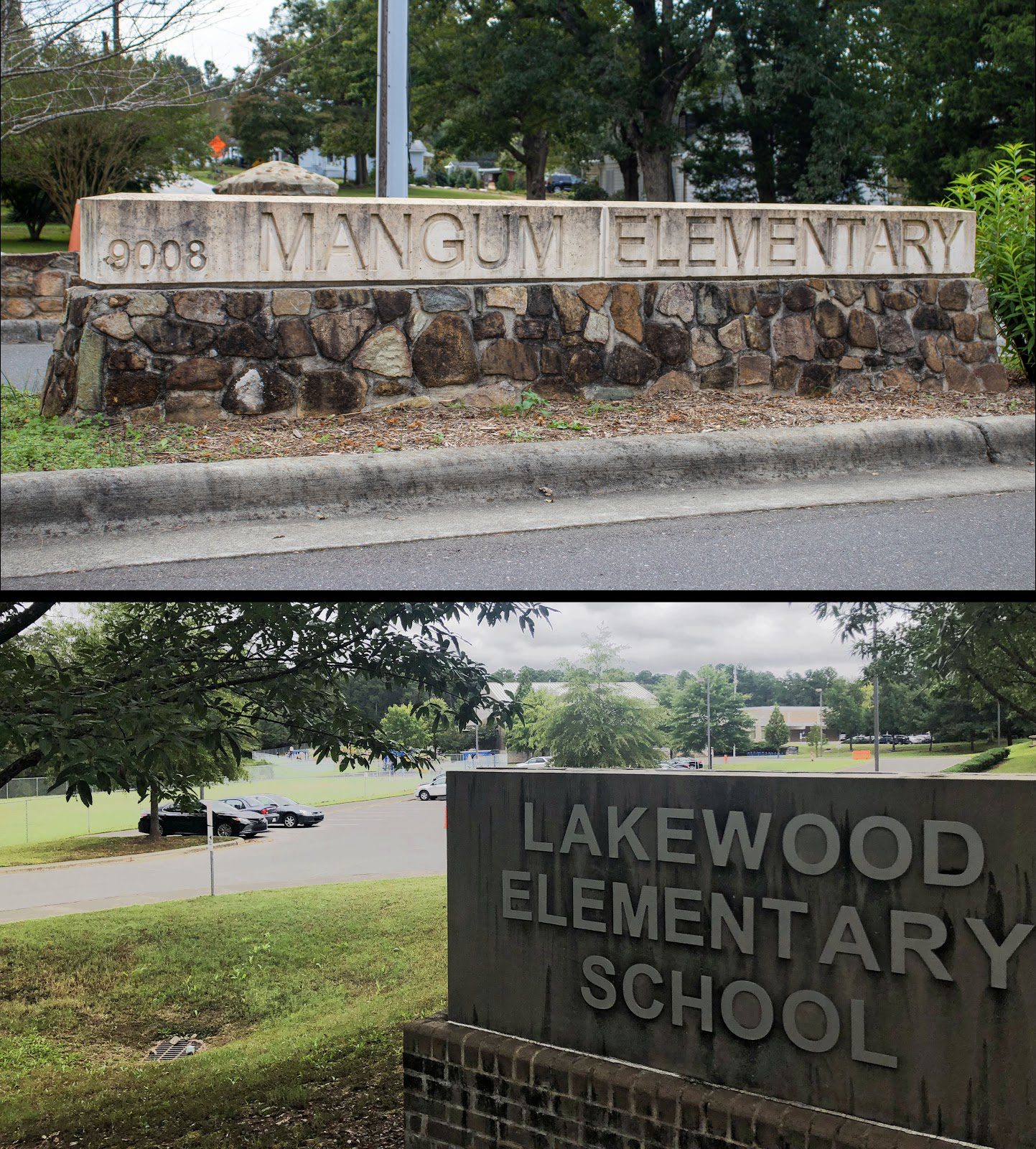 Lakewood Elementary School, nestled in a neighborhood adjacent to Duke Forest, has a relatively new principal. James Hopkins has been principal for a little more than a year.

So does Mangum Elementary, the northernmost K-5 school in the county. Gwendolyn Dorman took over in April.

But the two schools are miles apart, not just geographically, but also in test scores.

By state standards, Mangum is the highest-performing elementary school in Durham County. In 2017-18, it exceeded growth status and received an “A” for school performance. But Lakewood is one of the district’s lowest performers, having received an “F” last year.

Related story: How reliable are the state’s performance grades?

In 2017, Lakewood was one of the final six schools considered for state takeover by the North Carolina Innovative School District, an intervention program for low-performing schools.

It was ultimately dropped from the state’s final list. Now, with a year under his belt, Hopkins said his school could be trending up. He’s hired five new teachers and is excited for the future.

Meanwhile, Dorman hopes to keep Mangum at the top. But the pressure she feels is different.

“The lower-performing schools have a lot of stress coming down from the top, where any stress that we have in our building is created by us ourselves,” she said.

Lakewood has about 470 students and is tucked in a neighborhood of homes and apartment complexes near Duke Forest. But many wealthy families in that area have sent their children to private schools.

According to data compiled by ProPublica in 2017, the student body is about 54 percent Hispanic and 37 percent are black, with 100 percent of students receiving free or reduced-price lunches. That makes it one of the state’s poorest and most diverse schools.

The school has long been among the district’s lowest performers, having also received an “F” in 2016-17. In 2017, it was one of two Durham public schools assigned to the state’s Restart program, an experimental effort which gives struggling schools charter-like flexibilities.

That means Hopkins has freedom to use the school’s money however he sees fit. While other principals are hamstrung by specific teaching allotments, Lakewood gets more of a lump sum.

“It has been a huge blessing,” Hopkins said.

One benefit has been the ability to control class sizes. If not for the Restart program, Lakewood would have had to put teachers in trailers to keep class sizes below the state cap, Hopkins said.

“All of my teachers are in the building this year because we don’t have to subscribe to the class size limits,” he said.

The flexibility has also helped Hopkins make accommodations for Lakewood’s large Hispanic population. He’s been working to purchase translation headphones so he can communicate more easily with Spanish-speaking parents.

“I’m a rhythm speaker,” he said. “I hate having to stop and give you the microphone to interpret to Spanish. So we would not have been able to do that if we were not a Restart school.”

Since taking over, Hopkins and his staff have set their sights on bumping proficiency to 50 percent, up from the 37 percent that earned an “F” score in 2017-18. In addition the five new teachers, Hopkins said he hired a specially-trained teacher to work with struggling students.

“This year, with the team that I brought on board and the support that the district has provided us, there is no doubt that we are going to meet growth and we stand a very, very good chance of exceeding growth,” Hopkins said. “But there’s also no doubt in my mind, and I can almost guarantee this, that we will not be an ‘F’ school next year. We’ll be ‘D’ or a ‘C.’”

Hopkins said he’s optimistic that others in the area will notice the changes he’s put in place.

“Parents are coming back to Lakewood from charter schools and from private schools,” he said. “My goal is for Lakewood to reflect the demographics of its community, and right now it doesn’t. The goal is obviously to make sure that our school looks like our community, but we’re on our way there.”

Mangum is the northernmost elementary school in Durham County, with about 320 students from the community of Bahama and the surrounding area. The campus is rural, its main entrance tucked behind a giant oak tree and its water flowing from a well out back.

The school’s student body is about 82 percent white, according to ProPublica, and only 23 percent get free or reduced-priced lunches. It’s not a magnet school, but it does have several students transfer in from neighboring communities each year, Dorman said.

Mangum is also one of few Durham public schools that doesn’t receive Title I funding — money given to schools with high numbers of children from low-income families — so Dorman said it leans on community partnerships and its parent-teacher organization for support.

Parent volunteers are always willing to help, she explained. Some parents like to come in before school to make copies of worksheets so teachers don’t have to. Others build stage decorations for the school play.

Dorman said the teachers are just as invested, as well.

“We’re a community-based school,” she said. “Our teachers who teach here went to school here. They live in Bahama. Their children went here.”

The music teacher runs a music club for fifth grade students, for example, and the physical education teacher puts on a run-walk club on Tuesday and Thursday mornings for students and community members.

“Parents, grandparents, all kinds of people are out there on the track in the morning,” Dorman said.

“One thing the teachers do really well here is they provide students with a wide range of opportunities and they build background knowledge in a lot of different areas that they might not experience outside of school,” added assistant principal Tyler Steketee.

Inside the classroom, teachers balance preparation for the state’s year-end exams with engaging lesson plans. Dorman said Mangum’s is distinct from other elementary schools because it treats the fourth and fifth grades like middle school.

“We departmentalize our fourth and fifth grades,” Dorman said. “So if you’re a fourth-grade teacher, your job might be to teach math. You have three different classes that come to you for fourth-grade math.”

Other teachers specialize in English language acquisition and STEM, she said.

Dorman said departmentalization — a practice the school first tried out four years ago — lets teachers specialize in the subjects they’re most passionate about. It also gives them the chance to share the tactics and teaching styles that work for specific students.

For students, the practice limits the chance of having to spend all day with a teacher they don’t like.

“You get to go and you have to focus for an hour and a half, and then you get to change classes and go on to your next subject, Dorman said. “It very much prepares you for middle school.”