Home » How ‘Ms. Xenia’ keeps the community together at Forest View Elementary 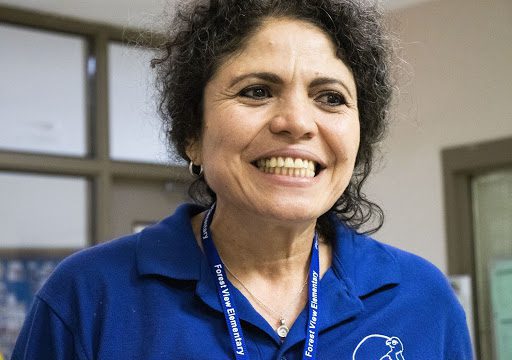 How ‘Ms. Xenia’ keeps the community together at Forest View Elementary

In a back hallway at Forest View Elementary School, a small boy sits at a desk outside the assistant principal’s office, his shoulders slumped under a gray hoodie and his feet dangling above the floor.

Xenia Carcamo, a school custodian, stops and whispers something in his ear. He smiles.

This is part of her magic, a sign of how she connects with the students at Forest View. She says this spot is where teachers send students who are having difficulty in class.

“Some students have behavior problems, and I always try to go closer to them,” she says. “Maybe in their family, they don’t have attention, or they don’t have love. And maybe they want to find that in the school, so I don’t have a problem giving it to them.”

In her 13 years at Forest View, Carcamo has become a vital part of the community, playing a role much larger than her title might suggest. She knows almost all of the students by name, and they refer to her affectionately as “Ms. Xenia.”

By state standards, Forest View is an average school, having received a “C” for performance in 2017-18. But the grades don’t tell the full story.

There are 40 different countries represented among the school’s more than 750 students. The student body is 36 percent Hispanic, 30 percent white, 21 percent black and 7 percent Asian.

Forest View is a melting pot of cultures. Now the school’s lead custodian, Carcamo knits the diverse community together as a translator, as an inspiration, and as a friend to everyone.

Carcamo is tall, with a round face and a big smile that makes her eyes squint. She says she came to the United States from El Salvador in 1997 and worked at a sunglasses company in New York for nine years.

Her move was complicated by some unexpected twists, which she recalls with tears in her eyes. First she separated from her husband. Then her daughter, 6 years old at the time, developed brain cancer. She died seven years later.

Looking for a fresh start, Carcamo moved her two other children once more, this time to North Carolina. She says she hoped to get a job with the state government, but her difficulty speaking English got in the way. Instead, she sent a job-seeking note to Forest View with her son, who was a student. Later that same day, she went in for her first interview.

Since her hiring, Carcamo has bounced between full-time and part-time jobs as a custodian and also as a member of the cafeteria staff. She says she takes pride in her work, and that she feels protective of the school’s students, especially after losing a child of her own.

“If they need something, I’m always there,” she says.

She says the children — especially the native Spanish speakers — go to her when they’re sad or distressed. Teachers do the same when they need help getting through to their students.

“Sometimes the teachers come to me and say, ‘Xenia, can you help with this? Can you ask him why he’s sad or why he’s crying?” she says.

On one occasion, she says a boy named Justin asked her for a second breakfast during her shift in the cafeteria. Speaking in Spanish, she asked why he needed a second helping. He said his mother hadn’t been feeding him properly at home.

“I’m always keeping my eyes on them,” Carcamo says of students like Justin. “In some countries, you can see or you have to live with what I call the hungry face. If you never see the hungry face, you can’t understand how these kids feel.”

Her workday starts at 10 a.m., but she says she regularly arrives at 8:30 a.m. and stays late into the evening.

“My goal is to have everything ready so they can come into a safe place, a clean place,” she says. “So if I have to work extra hours, I don’t care nothing about it.”

Forest View’s students, teachers and administrators love her dedication. “She always puts the students first and she takes pride in her work,” says assistant principal Ronnie Winston, who has known and supported her since her move to North Carolina.

Carcamo says she has a special place in her heart for children, which makes it easier for her to go the extra mile. But just as she supports Forest View’s students, she’s also become a go-to resource for Hispanic candidates applying for custodial positions in Durham.

She says she’s recruited several people to positions in Durham public schools, including multiple members of Forest View’s six-person custodial staff. “The first thing that I always say is, if you can help somebody go to the next step, why not?” she says.

Winston says Carcamo’s recruiting has been helpful, and that he knows any candidate she’s recommended will work hard to keep the school clean.

Durham’s custodial jobs have been more attractive since the district recently switched from an outside contractor to an in-house model, Carcamo says. Now that custodians work directly for the district, they get better benefits, such as insurance and the ability to take more sick days.

That’s important, she says, because it’s easy for custodians to find themselves being taken for granted.

“Sometimes, some people make you feel like, ‘Oh, she’s custodian, I can throw away this one here and they get paid to clean,’” she says. “Some people, they are like that. But people are people and you need to respect everybody.”

But at Forest View, Carcamo feels like she’s earned everybody’s respect. She adores her role, and she says she’s never considered leaving, even as other opportunities have popped up.

“I always say this is my family,” she says.