Home » McDougald Terrace crisis was decades in the making 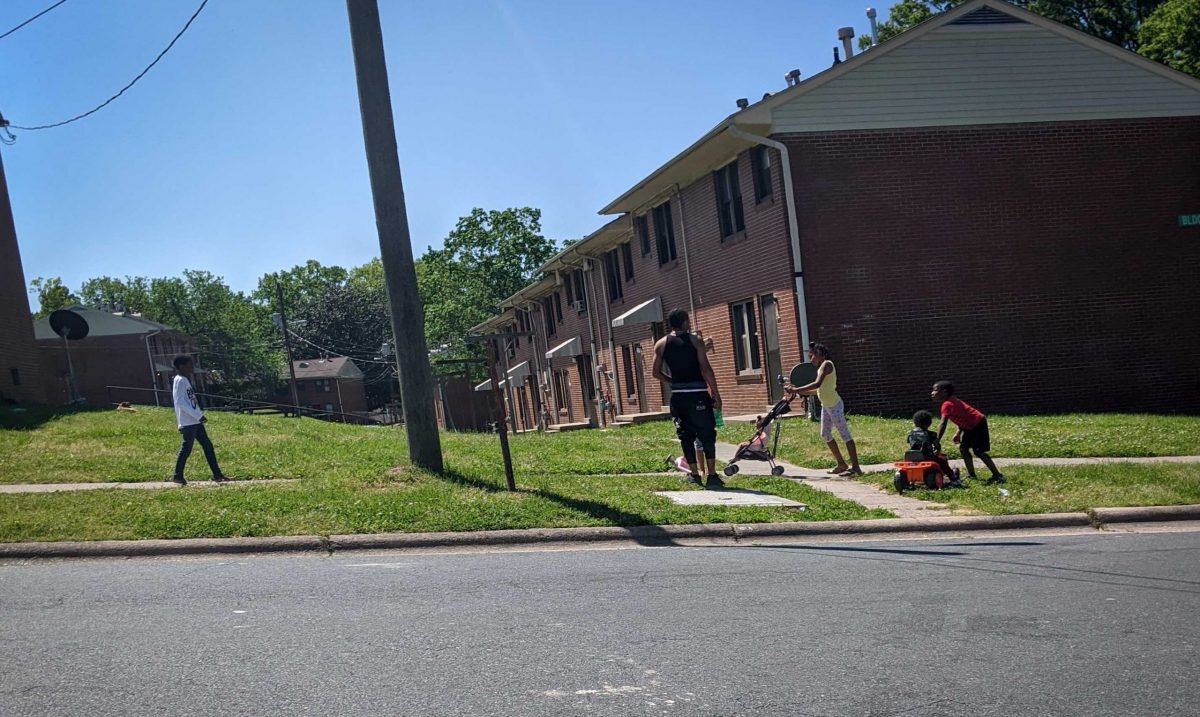 McDougald Terrace crisis was decades in the making

Beginning in late December, inspectors found stoves, furnaces, and water heaters emitting excess amounts of the invisible, odorless gas, which can be lethal.

These substandard conditions didn’t come out of the blue. McDougald Terrace failed federal inspections in 2019, scoring a dismal 31 out of 100. The federal Department of Housing and Urban Development marks scores lower than 60 as failing grades.

Exposed electrical wires and ventilation problems, including misaligned chimneys and faulty ventilation systems in water heaters, were among 153 health and safety deficiencies detailed in the federal Housing and Urban Development inspection report. Inspectors also found mold and roaches in apartments at McDougald, which was built to house black tenants in 1954, when racial segregation was still sanctioned across Durham.

Total costs for putting residents up in hotels, providing them with stipends and completing emergency repairs at McDougald Terrace are expected to reach at least $9 million, the Durham Housing Authority announced this month.

After news broke that parts of McDougald Terrace were unsafe, Durham Housing Authority and city officials immediately blamed inadequate funding from HUD. They claimed that the federal government failed to give the authority the money needed to keep Durham’s public housing communities in good repair.

Federal funding for the Durham Housing Authority has actually been on the rise in recent years. In 2017, the authority received a total of approximately $32 million in federal awards. In 2018, awards totaled about $34.5 million, and this funding rose to over $35 million in 2019.

While federal funding has technically increased each year for the past three years, the authority has not been receiving enough funds relative to their needs, a DHA spokesman said.

Researchers and HUD officials have confirmed that federal grants across the country have not been enough for housing authorities to keep traditional public housing well maintained. In 2011, HUD estimated that the deferred capital needs in public housing amounted to nearly $26 billion and that number has only continued to grow.

Despite that, housing authorities in other North Carolina cities operating in the same challenging funding environment manage to keep their properties in better shape than Durham does.

What explains this disparity?

Most Durham Housing Authority properties depend on federal grants. Rents paid by tenants with incomes low enough to qualify to live in public housing don’t cover operating costs and upkeep. Before the coronavirus outbreak, DHA reported its residents had average annual incomes of $13,000 a year and average rent paid was $238 a month.

When a housing authority pursues a RAD conversion project, it can use public money besides HUD funding and private investment to improve authority-owned property. A share of the housing can be rented at market rates.

Durham has converted only three out of its 17 properties to this model. Last fall, Durham voters passed a $95 million housing bond that will help DHA convert four more public housing communities and the DHA office building. Some of these plans call for tearing down what’s there now and building new housing.

The Greensboro Housing Authority, on the other hand, has converted all but one of its public housing communities to RAD properties. This allowed the authority to leverage more private capital to maintain these properties.

RAD conversion does offer housing authorities new sources of funds. But housing authorities in North Carolina that have not transitioned entirely to the RAD model still keep their rental housing in better shape than Durham does, according to HUD inspection reports.

Even without the extra cash that RAD conversion provides, Raleigh and Winston-Salem had no properties that failed their most recent HUD inspections. Durham had seven in 2019.

The company specializes in inspecting and mitigating issues prior to HUD’s evaluations. This helps the authority keep up with needed repairs and earn high scores when HUD inspectors arrive, Cheshire said.

The Raleigh Housing Authority also takes extra steps to maintain their public housing despite funding challenges. Over the last few decades, that authority demolished and rebuilt its three largest properties, using Hope VI grant funds for two of the projects.

“The redevelopment of these properties has helped keep repair costs lower for the agency in the long run,” Raleigh Housing Authority special assistant Laura McCann explained during an email correspondence.

The Durham Housing Authority, which is expected to receive more than $34 million in federal funding this year, has no such success story. And there’s no one place to pin the blame, according to observers inside and outside the organization.

Carl Newman, general counsel for the Durham Housing Authority, says that RAD conversion is Durham’s best hope for improving its public housing. RAD conversion has already been completed at Morreene Road, Damar Court, and Laurel Oaks, but much more work is needed.

RAD conversion is at the heart of DHA’s planned redevelopment of five of its properties in downtown Durham. With a share of a $95 million affordable housing bond that Durham voters approved last fall, and other additional funds, DHA plans to invest more than $58 million in redevelopment.

The focus is on five properties in and near downtown, including J.J. Henderson, Oldham Towers, Liberty Street, Forest Hill Heights, and DHA’s office building on East Main Street. DHA aims to create a mix of subsidized housing reserved for low-income residents and market-rate rentals at each site.

McDougald Terrace is notably missing from this redevelopment list. At first glance this appears puzzling, as McDougald is arguably the DHA property most in need of redevelopment.

But Mayor Steve Schewel shortly after the housing bond passed last fall said there are economic reasons to wait on rebuilding McDougald. The city’s largest public housing property is over 65 years old, making it a challenge to renovate. “It’s good to get experience creating these mixed income communities on a smaller scale first,” the mayor said.

In order to complete these redevelopments, DHA is relying not only on funds from the affordable housing bond but also on private investment. And private investors need to be convinced they’re putting their money into something worthwhile.

“You have to give confidence to people that you’re going to succeed,” Schewel said, “and the best place in Durham to gain that confidence is Main Street, and downtown. We know that private investors will come there, and we know that market rate renters in these communities will want to live there.”

After finding success on Main Street, city and DHA officials can then move on to more challenging projects like McDougald, Schewel said.

“We’re going to do RAD conversion, because actually that’s the only solution. It just isn’t a quick one. Had we started this project 10 years ago…,” said Newman, his voice trailing off for a few seconds. “But, here we are.”

There has been significant turnover in management at the Durham Housing Authority in recent years, Newman said. CEO Anthony Scott started with the authority in 2016. “The people who could have made a different decision 10 years ago, most of them don’t work here anymore,” Newman said.

Living with the legacy

Gunter, at the statewide affordable housing organization, said the federal government’s history of underinvestment in public housing shoulders some of the blame for conditions at McDougald Terrace.

“This is what it costs when you have spent decades under-investing,” Gunter said, “This is the bill coming due. It really is a no-win situation. And the folks that get screwed are the residents”

During the evacuation of McDougald, the mostly women and children residents were relocated to 16 hotels throughout Durham County, displaced from their kitchens, school bus stops, neighbors and, sometimes, practical transportation to jobs.

When Harvey was relocated to Quality Inn & Suites on Hillsborough Road, her headaches stopped, she said. She was safe from carbon monoxide leaks, but her world had been turned upside down. As a result of the disruption, she was forced to quit her job, she said.

In a scramble to get people back to their homes, work at McDougald was exempted from  Durham’s stay-at-home order intended to decrease the spread of coronavirus in March. Residents, including Harvey, returned to the sprawling brick complex near North Carolina Central University in May.

Back at home in McDougald, carbon monoxide leaks are no longer a threat, Harvey said, but her living space is still in poor condition. “I still have mold in my apartment. All they fixed was the appliances,” she said.

Harvey blames Durham Housing Authority for the mess at McDougald. “All these years, if certain things had been updated sooner, these problems wouldn’t have gotten so bad,” she said, “My heater looks like it’s from the beginning of time.”

Although Harvey would like to move with her son to a safer home, this is not the right time.
She hasn’t been able to search for another job while coping with the impacts of the coronavirus pandemic, including public schools closing. Home-schooling her son without a laptop or teaching experience have been among the hardships, she said.

She won’t be turning to the Durham Housing Authority for help of any kind. “What are they gonna do for me?” she said, “They have a lot of problems to deal with, I’m just a small nut.”

At top: After a months-long evacuation, McDougald Terrace residents have returned to their aged public housing community.  Photo by Corey Pilson