Home » In Courtroom 7D: Tears, dramatic videos and questions about a homicide investigation 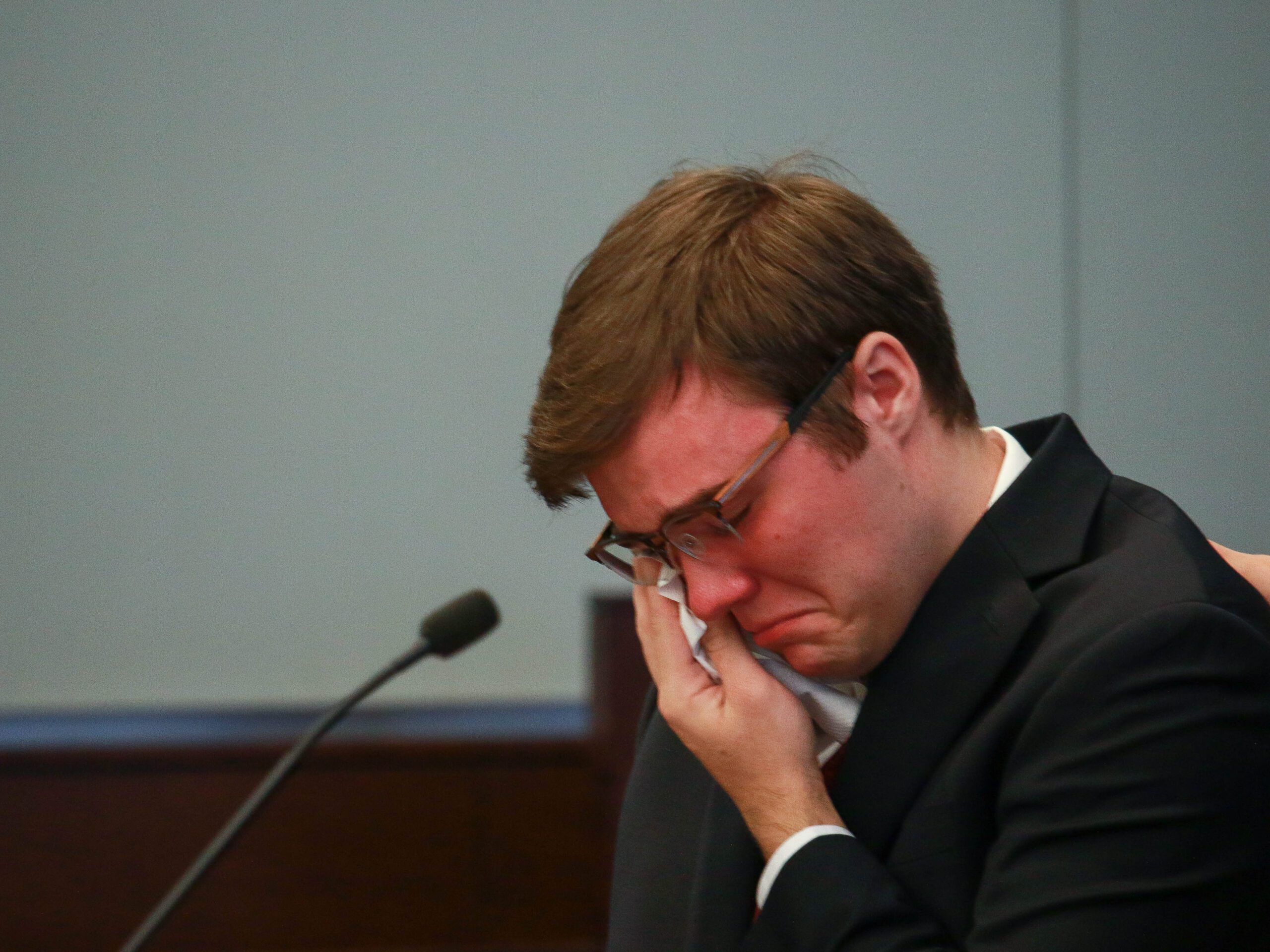 In Courtroom 7D: Tears, dramatic videos and questions about a homicide investigation

Above, Alexander Bishop cries in Durham County Superior Court as his attorney plays a video of police officers trying to save the life of his father. Photo by Cameron Beach | The 9th Street Journal

Correction: This story has been updated. An earlier version incorrectly said that Bishop said in his 911 call that he found his father on the floor.

By Niharika Vattikonda and Erin Williams

Alexander Bishop wept as the video played on the big screen in Courtroom 7D. It showed police arriving at his Durham home and working feverishly to save the life of William Bishop, his father.

The dramatic video, recorded by body cameras worn by Durham police officers, was the focus of a hearing Wednesday morning. It showed William Bishop unconscious on the floor as police officers urgently gave him CPR.

As the video played in court, Alexander Bishop removed his glasses and buried his face in his hands, sobbing.

Allyn Sharp — an attorney for Bishop, a 17-year-old boy accused of killing his father — questioned officers about whether they had followed proper procedures. Judge Orlando F. Hudson Jr. held the hearing to consider Sharp’s motions that contend Bishop was the victim of shoddy police work.

One of the motions asked the court to sanction prosecutors for failing to provide Bishop’s attorneys with all the search warrants and evidence related to the case. Another asked that investigators return Bishop’s and his mother’s electronic devices that were seized during a search.

The other two motions sought to dismiss evidence found as a result of search warrants and statements Bishop made when he was first questioned.

Those statements were the focus of much of the testimony Wednesday. Sharp questioned whether the statements Bishop made at the scene were lawfully obtained. But at the end of the day, Hudson denied her motion to suppress the evidence from that questioning. The hearing will continue Thursday on the other motions.

Wednesday’s testimony from police provided new details about the investigation and the early suspicions that officers had when they arrived at the Bishop home on April 18, 2018.

When Officer Austin Farley asked Bishop about his relationship with his father, Bishop described him as emotionally abusive. “He went on to state that he wasn’t too concerned if his father didn’t come back,” Farley testified. “He also stated that he would be afraid of what his father did if he did survive.”

Officer Samuel Kimball overheard Bishop’s remarks to first responders, and he testified that he was struck by the way Bishop talked about his father.

“I noticed that he was consistently referring to his father in the past tense,” Kimball said.

At that point, William Bishop still had a pulse and would not be pronounced dead until three days later in a hospital.

“Usually grieving relatives or someone in this situation is still referring to their family member in the present tense,” said Kimball.

In her motion, Sharp argued that police officers unlawfully interrogated the teenager in the house without advising him of his Miranda rights. Officer Matthew Garvin testified that they were simply securing the scene.

Sharp responded that for the purpose of Miranda rights, the only standard that applies is whether a reasonable person — in this case, a reasonable 16-year-old — would think that they were being held in custody. If that was the case for Bishop, then questioning him without an attorney or a parent present violated due process.

As a part of her cross-examination, Sharp played another clip from a body-cam video from one of the officers. “Keep an eye on the son. Make sure he doesn’t go anywhere,” Kimball says on the recording.

But the officers also testified that they were not ready to read him his Miranda rights.

“Did you at any point advise Alexander of his rights?” Sharp asked Officer Matthew Garvin, another police officer who responded to the call.

“I did not,” Garvin said. Two other officers on the stand also testified that Bishop was not read his Miranda rights.

However, Beth Hopkins Thomas, the assistant district attorney, argued that the “free to leave standard” — interpreted as whether the defendant thinks they’re in custody — does not apply under North Carolina law, which demands a “totality of the circumstances” analysis.

She said Bishop was allowed freedom of movement, the officers themselves did not make explicit statements that he was in custody, and no restraint or intimidation was used to keep the defendant in the house.

In his 911 call, Alexander Bishop said repeatedly that he thought his father was dead and suggested twice that the family’s dog may have strangled him by twisting a leash around his father’s neck. Police began to focus on Bishop as a suspect, and a grand jury indicted him in February.

In July, Bishop’s attorneys filed motions to throw out most of the evidence, including statements made by the defendant. The motions also claimed that the lead homicide investigator omitted key facts to obtain search warrants.

At the hearing, officers testified about their growing suspicions while they were at the Bishop home.

After Kimball turned off his body cam, he met with other officers to discuss what they had found. He sent one of them to find Bishop, “just to monitor his movements out of caution,” Kimball said.

Hopkins Thomas, the assistant district attorney, asked Kimball what he thought at that point.

“I said that either it was a suicide or the kid did it.”