Home » The tale of the ten little mill houses 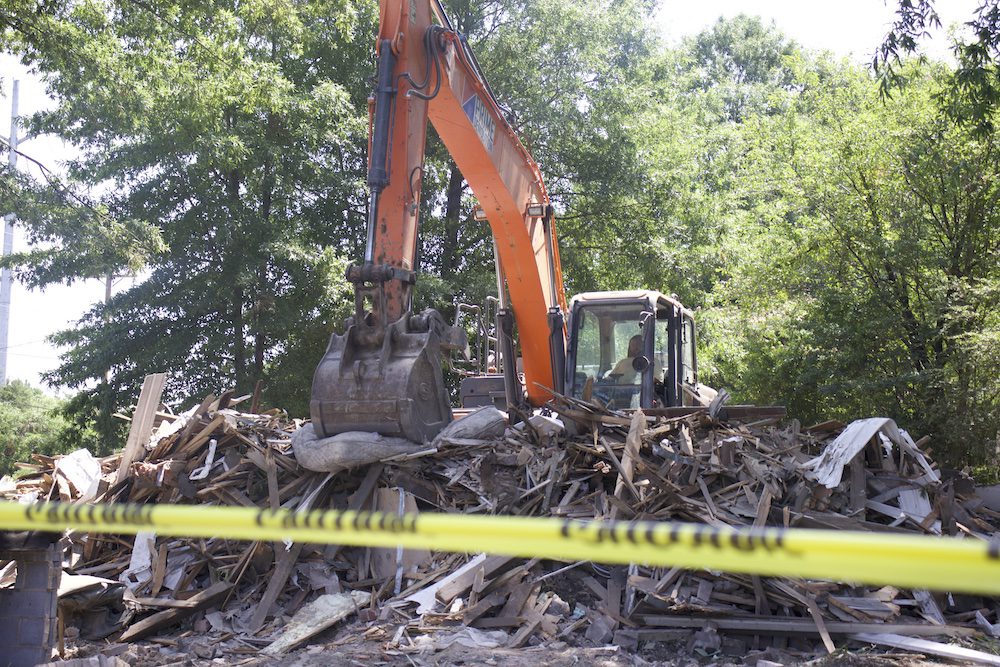 The tale of the ten little mill houses

On April 22, a cryptic Craigslist advertisement titled “Durham FREE Historic Houses (10) YOU MOVE: Act fast!” rattled Durham Facebook groups and email inboxes. Local preservationists quickly identified the properties as remnants of the once-prosperous Erwin Mill Village—parcels recently acquired by Wood Partners, an Atlanta-based developer and manager of high-end apartments. Three days later, the listing was flagged for insufficient information and removed, leaving unanswered the question of who posted the ad—and what would become of the houses.

It’s been three months since that ad and the story of the homes has come into focus, revealing an unusual tale of preservation, bulldozers and the tension between old and new Durham.  By July 11, the 10 historic homes on Rutherford and Bolton streets have dwindled to seven. The other three, 738, 736 and 732 Rutherford, were heaps of deformed roofing, fractured wooden planks and forgotten household necessities. The sides of the remaining structures were tagged “Abate” in sloppy magenta spray paint with a number assigning their place in the demolition timeline—a timeline set to be complete by the end of July.

For Tom Miller, president of Preservation Durham, the nonprofit that has led efforts to protect the houses, the story of the Erwin Mill Village homes represents a missed opportunity.

“Whether Wood Partners was responsible for the Craigslist ad or not—it wasn’t a bad idea,” says  Miller. “Wouldn’t things have been better if Wood Partners reached out to us back when they first got control of the property? Then, they could have made themselves local heroes.”

A WINDOW INTO DURHAM’S WORKING-CLASS PAST

To the average eye, the mill houses on Rutherford and Bolton streets are not remarkable. But to Miller and Chris Laws, the remnants of the old Erwin Mill Village, illustrate Durham’s working-class origins.

So when Laws saw the Craigslist ad on April 25—emailed to him by Cathleen Turner, regional director of Preservation North Carolina —he took notice. Laws opened the email, clicked, and found a broken link. But, for Laws, a fourth-generation Durhamite with familial ties to the mill, the headline and the words “act fast” lingered. He and Miller grew determined to save the old mill houses. 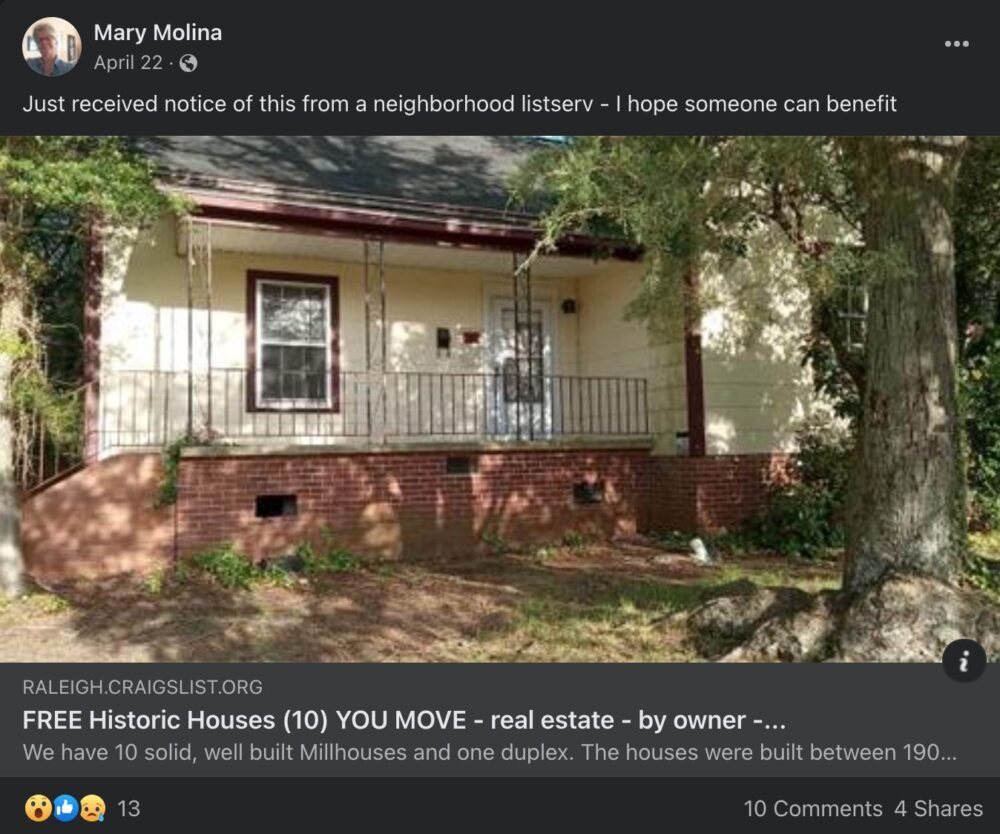 “In historic preservation, it is seductive to find the great man’s mansion and save it. Who doesn’t like that?” says Miller. “We get to experience a bit of HGTV in our neighborhoods. But that’s not always where the history is.”

“Durham’s history is in these worker houses,” says Miller. “A home is where life happens: where mom and dad lived, where the piano lessons occurred, where kids did homework, where people grew old. Some families have lived in these homes for over a century. We need to refocus our energy on these stories.”

The mill homes at Rutherford and Bolton tell the story of a vanishing Durham. In the late 19th century, cotton magnate William Erwin envisioned a self-contained community for textile mill workers in West Durham. So, he built a village: 440 residences, a company store, an auditorium, a playground, a zoo, and more. In 1986, West Durham—including the mill village area—was named to the National Register of Historic Districts—a designation that recognizes historical significance but grants no regulatory protections. Today, there are 25-30 surviving mill houses in Durham—including the seven parcels at Rutherford and Bolton, all that remains of Erwin Mill Village.

To Chris Laws, the mill village’s history is personal. Laws’ grandfather, a mill worker,  attended Durham High School during the day and worked the third shift at night. Every morning he returned to his humble abode on 14th (now Rutherford) Street.

With a swipe of a finger, Laws leafs through memories stored in his iPhone photo gallery. He beams as he shares a digitized home video: a shaky frame that captures Laws, an infant at the time, and his grandfather lounging in the side yard of their family home in the mill village.

He swipes again, stopping at a photo that shows dozens of people, dressed in winter attire and crammed in a narrow mill house kitchen.

“At times, there would be 83 people in these little houses for communal gatherings,” says Chris. “Two generations removed, we’ve continued the annual Laws Christmas party tradition—a tradition that started in this mill village.” 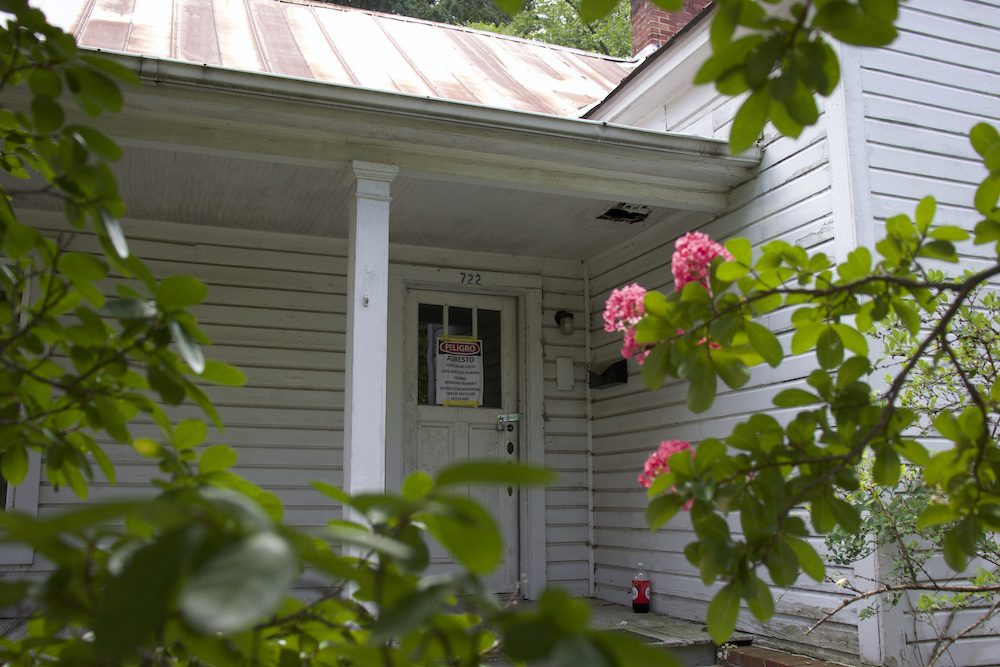 The modest homes will be replaced with a six-story apartment complex of 336 units. The development is the latest of many new apartment buildings springing up across Durham in recent years. Rents for the apartments have not yet been set, a spokesman for Wood Partners said. When asked if the development will include any affordable units, Wood Partners did not respond. Rents at a neighboring Woods Partners property, Station Nine, range from $1583 a month for a small one-bedroom unit to $2937 for a two-bedroom unit.

Laws sighs at the idea of another high-end apartment building in the Bull City.

“Yes, we need places to house Durham’s growing population,” says Laws. “But we also need to address that people are being displaced by luxury development.”

Laws and Miller were both steeped in the mill village’s history. So when they learned that the Rutherford Street houses were coming down, they were determined to do something. Miller emailed Wood Partners, hoping to discuss the mill homes. Weeks went by, and the email was unanswered.

By late May, Laws and Miller became concerned that they had not heard back from Wood Partners. On May 21, they called the firm’s branch at Chapel Hill, where their calls went to a greetlingless voicemail box. They left several voicemail messages all saying essentially the same thing:

We are interested in the possibility of saving the historic houses on your property at Bolton and Rutherford streets in Durham. We would like to talk to you about the homes and how we might work together to save some of them.

No call back. So on May 25, Laws decided to visit the Chapel Hill branch himself and met briefly with the branch’s managing director, Caitlin Shelby.

“She didn’t have much time to talk. But she told me that they did not put up the Craigslist ad. She said she did not know where it came from.”

According to Laws, Shelby said that demolition of the homes would begin in a few days (it wouldn’t actually begin for another month). Laws offered his business card and personal cell number, and Shelby promised to follow up, Laws says. He left the office optimistic.

Meanwhile, Miller made inquiries with groups that might be able to use the homes, such as Durham Community Land Trustees. The affordable housing nonprofit expressed interest in discussing the options, said asset manager Sherry Taylor.

“It would take a good amount of funding,” Taylor said. “The trust would need a good assessment of the structures. They may need to be renovated. But, we’re interested in figuring out what the possibilities could be.”

Laws and Miller were not naive. They have long known the hurdles associated with moving a historic structure. Still, they hoped—at least—for a meeting and conversation with Wood Partners.

“I mean, we’re not kidding ourselves,” Miller said in early July. “You don’t just come around and pick up a house. You have to get all kinds of permissions. And the power company goes nuts! The railway hates it. It takes time. But if there were a way that these folks could work with us, we would be delighted. And I don’t see how it could hurt them.”

SALVAGING A BIT OF HISTORY

The weeks ticked by, and Preservation Durham did not hear from Caitlin Shelby or Wood Partners.

On July 1, Miller and Laws mailed a letter to Wood Partners’ corporate office in Atlanta.

On July 6, the first of the 10 homes, 738 Rutherford, toppled. Locals in the Teardowns of Durham Facebook group shared photos of the once neat and quiet street, now marred with red caution tape and demolition equipment, framed by sad and angry emojis.

The next day, a fretful Chris Laws drove to Rutherford Street, hoping to, at long last, discuss the homes with somebody with hands on the project. He pulled up in front of 736 Rutherford, where a sunburnt contractor in a fluorescent green t-shirt with the Wood Partners logo directed excavation machinery to remove scraps. Laws told the contractor about the community campaign to save the houses. It was the first he had heard of it. 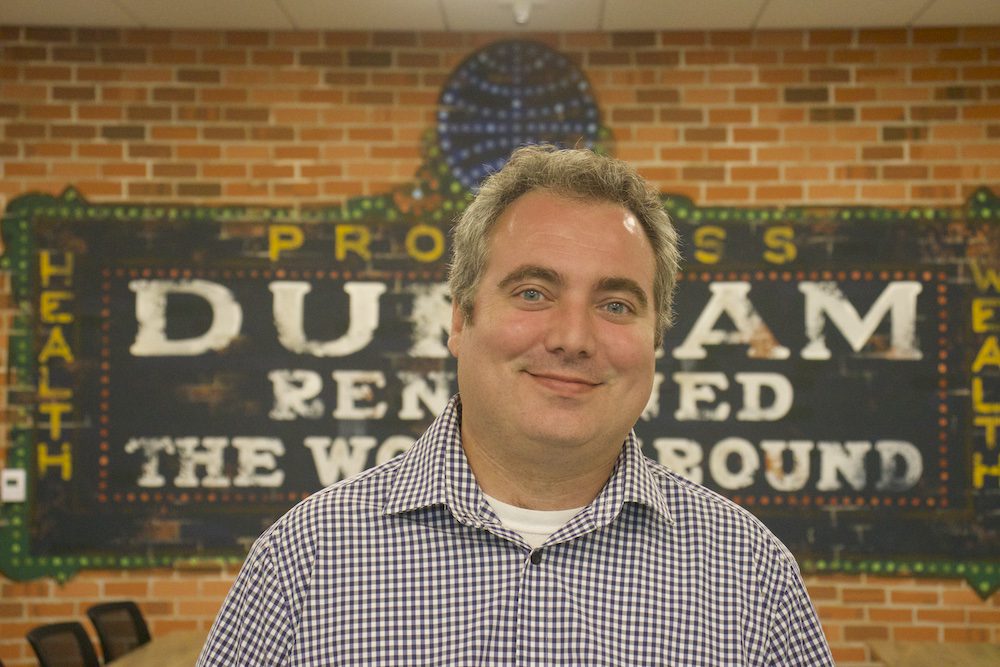 Laws asked the contractor for permission to collect architectural salvage—windows, doors and door knobs, and the contractor agreed to check into it. “If we were able to collect windows, for example, that would be helpful,” says Laws. “And it would give new life to another space.”

On Friday, July 8, 736 Rutherford was demolished. The remains were trucked away, leaving an empty lot.

The next day, in response to an inquiry from The 9th Street Journal, Caitlyn Shelby of Wood Partners released a statement:

As part of our commitment to positively impacting the communities we serve, Wood Partners is always happy to coordinate with our neighbors in Durham, and we are open to speaking with Preservation Durham in response to their interest in potentially salvaging materials/sections from the mill houses prior to the completion of demolition in the coming week. While we did not participate in any way in posting the previous Craig’s List advertisement, we will aim to keep the community abreast of the latest developments surrounding this project and will share information regarding intended plans for the complex via the property website as those become available.

“It was a pleasant conversation,” Laws said. “She said she would talk to the site superintendent about pulling some things. From what I understand, someone from the firm will contact me—but I do not know when that will be.”

On July 14, interior doors, a kitchen counter, and a box of light fixtures appeared on the front porches at 711 and 721 Bolton Street.

Chris Laws still doesn’t know who posted the Craigslist ad, he said. He wishes things could have ended differently.

“I just wish we could have effective dialogue,” Laws says. “I don’t think they understand how important these places are to the community. They are physical reminders of our heritage.”

“I’m sad, but I can’t mourn. There is still a lot of history at peril in Durham. So, we will press on. Hopefully, we learn something from this, and we will be better for it.”