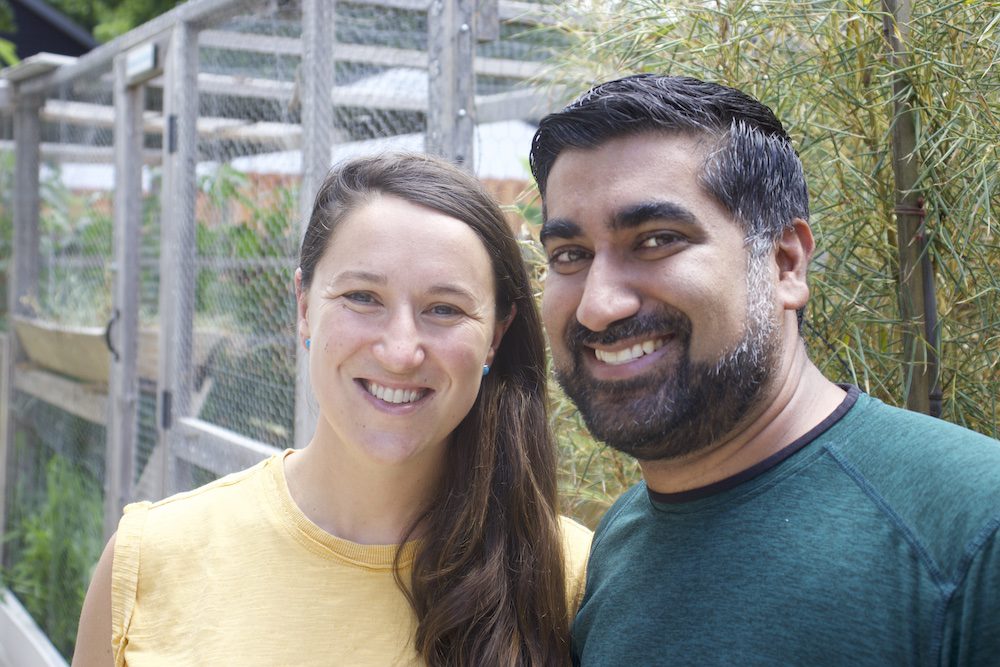 Browning banana peels, decaying fishbones, crumbling pizza crusts. These ingredients may not seem appetizing to most, but to seedlings hungry for fertile soil, they’re the stuff of a gourmet meal.

A city food waste collection program in the Walltown neighborhood has redirected more than four and a half tons of waste from landfills since it launched just six months ago. Through a curbside pickup system, the pilot program processes food scraps from 80 Walltown households and returns them to the environment as rich compost.

Every Thursday evening, small black carts line the streets of Walltown. One of these belongs to Hafeez Dalla and his partner, Carina Barnett-Loro, who joined the program when recruitment efforts began in late 2021. Neighbors often inquire about the container, they said.

“Actually, a lot of people have come up to us and said, ‘Oh, what’s that? I haven’t seen it before’,” said Barnett-Loro, sitting on her back porch which overlooks her fruitful garden. Some of those neighbors have since signed up, she said, eager to make their neighborhood a greener place.

The program represents a collaboration between the city, a local company and Duke researchers. The city collects the food waste and delivers it to Atlas Organics, a company that converts the scraps to compost. This final product is sold to gardeners and landscapers and also distributed for free at occasional public giveaway events, such as a June 11 Compost Giveaway at the Briggs Avenue Community Garden. The city will work with Atlas Organics to host another event in the fall.

Melissa Southern, who first began composting in 2019 to nourish her garden beds, was also excited to see the project serve her community. “It seems that Walltown does not typically get picked for these kinds of pilots,” she said. “I love that our neighborhood was chosen, and to see it do so well and so many people participate is really…it’s encouraging.”

Southern lives in Walltown with her husband and one-year-old, and has seen her household’s garbage output shrink to just a third of what it once was.

The pilot project was originally intended to run for just 12 weeks, according to Wayne Fenton, the city’s assistant director of solid waste. But when the trial period was up, all participants opted to continue curbside food waste collection.

The environmental benefits of composting extend beyond improving soil health and conserving water. By keeping food waste out of landfills, composting helps curb methane emissions that contribute heavily to global warming. Nevertheless, some deterrents keep people from taking up the practice: for instance, the odor.

Dalla recalled a recent party he and Barnett-Loro hosted in which composting played a role.

“We had a party here not that long ago, and we got all compostable plates and cups and stuff and thought it’d be great if everyone just put their stuff in the compost. And it was…I don’t think we anticipated just how stinky the bin had gotten over time,” he said, chuckling. “But, you know, we hosed it out, and it was fine.”

Despite this minor hiccup, the couple has enjoyed their experience. “We love the program. We’d love for it to get expanded for all of Durham,” said Dalla.

To run smoothly, the program relies on psychology as much as earth science. In order to motivate and sustain the habit of composting, the city collaborates with the Duke Center for Advanced Hindsight to formulate strategies and messaging. The city issued countertop food waste collection bins with acceptable items illustrated clearly on the front and also encouraged participants to download the Durham Rollout app, which sends weekly reminders about food waste pickup days.

Lyndsay Gavin, innovation project manager for the city, says programs such as the Walltown pilot may encourage environmentally friendly behaviors in other areas of life and foster engagement with one’s community.

“Does collection of your food scraps in the morning make you think about turning your thermostat down or reducing your water use, or some other kind of pro-environmental behaviors that we would consider spillover from participation in this?” she said.

“And then, even beyond environmentalism, this is a city-run municipal service that’s being brought to you. So does that also make you think more about belonging to your community or engagement with your local government?”

Project leaders are currently scouting out a new candidate area for phase two of the project, which is expected to kick off in mid-August. The second phase will reach  roughly 500 households, in addition to the 80 still receiving service in Walltown. In this phase, researchers from the city and the Duke center will analyze how much waste is diverted from landfill. They will also assess whether behavioral interventions reduce contamination of the compost and will conduct surveys and interviews to gauge participants’ attitudes towards the program.

Barnett-Loro is optimistic that her vegetable peelings and coffee grounds are making a difference. “I think it is, from a behavioral change standpoint, one of those daily reminders of, you know, this is the kind of the impact that I’m having,” she said.