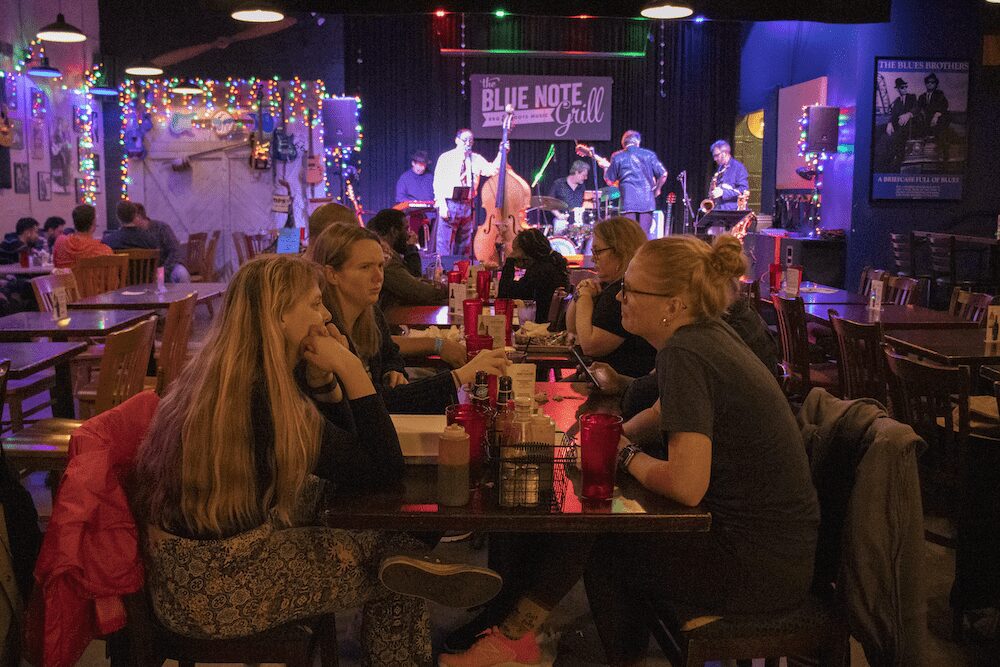 Two years into the pandemic, live music venues hope for better times ahead

In October, Bill Whittington, owner of Durham’s Blue Note Grill, was eagerly awaiting a performance by singer-songwriter Darrell Scott. The show was slated for Thursday, Oct. 21 and  had been promoted on Blue Note’s website, Facebook and Instagram accounts.

Yet a week before the show, hardly any tickets had been sold. In the midst of the Omicron wave, the venue made a joint decision with Scott to cancel the show.

“It was frustrating,” Whittington said. “Things were picking back up, and we were looking towards normal again. Then September and October came along and numbers went back down like 50%.”

“Things started to seem normal again, and then Omicron hit,” Roth said. “It was almost like we were starting from scratch.”

The Darrell Scott show has since been rescheduled for April 28 at Blue Note, and Whittington is hoping for a strong turnout. But the moving puzzle pieces of canceled shows and rescheduled dates are among the many challenges new COVID variants present for Blue Note and other Durham music venues. Although wary of yet another wave, venue owners are hopeful that as COVID cases diminish, Durham residents will feel comfortable going to concerts again.

Pre-pandemic, Motorco expected one in 10 ticket holders not to show up for a concert. The pandemic brought dramatic changes.

First the club simply went silent. Large gatherings were not permitted because of government regulations and customers wanted to stay home, anyway. When Bully, an American rock band, took the stage at Motorco on August 23, 2021, it was the first time the venue held a live performance since March 2020. Yet only 64% of ticket holders showed up to the event.

Mdou Moctar, a Tuareg singer and musician, took the stage on September 5, 2021 expecting a full house. His show had practically sold out, yet he was met by applause from only 74% of those who had purchased tickets.

Then came the Omicron variant. At Motorco and other venues, many fall shows were cancelled because artists feared COVID or ticket sales were too low. Roth, Motorco’s owner, says it’s difficult to put a number on lost profits. “Obviously it’s better for folks to buy tickets and not show up than not buy tickets at all, ” he said.

It’s not just about ticket sales, though. When ticket holders don’t show up, Motorco loses a significant portion of potential bar sales, the club’s primary source of income from concerts. At Mdou Moctar’s concert, no-shows meant that the club lost a quarter of its potential revenue, Roth said.

In addition to its concert showroom, Motorco has a separate restaurant and bar that allows the business to make additional income. Blue Note Grill also has a restaurant. Whittington said his business would not have survived the pandemic without the additional profit.

Tim Walter, director of The Fruit, pointed out that most music venues in Durham are either supported by the city or have a restaurant. For venues that rely solely on live performances for their revenue, the second shutdown due to Omicron prolonged financial troubles.

“Live music in Durham as a stand-alone proposition is a money-losing operation in the best of times,” Walter said.

As a result of the pandemic, The Fruit is now carrying 50% more debt. If 2022 doesn’t pick up as many business owners hope, the Fruit could face double the debt burden the club carried before COVID. This potential increase in debt would add three to four thousand dollars to the club’s monthly overhead, Walter said.

Now, as Omicron cases  slow, music venues are focused on moving forward with pandemic precautions in mind. Tritonal, an American DJ duo, recently performed at The Fruit. The show sold out at the last minute, but Walter was disappointed nonetheless.

“It should have sold out a week in advance,” he said. “When I start to see that happening, then I’ll say we’re back. But I don’t think that will happen in 2022.”

Venues in the Triangle vary in their COVID regulations. Cat’s Cradle in Chapel Hill, one of the Triangle’s venerable music venues, requires that concertgoers show either proof of vaccination or a professionally administered negative test within 72 hours of the show date. However, such requirements present an additional burden on venues, said Cat’s Cradle owner Frank Heath.

“It’s very time-consuming and intensive because everyone shows up at the same time,” Heath said. “We’re doing our best to get people through the doors as quickly as possible.”

Motorco has similar precautions in place. The club requires temperature checks, vaccination checks and  masks. Since its restaurant provides a secondary source of income, Motorco can afford to lose some concert customers who refuse to get vaccinated or choose not to wear a mask, says Roth.

Many venues in Durham are not as strict. The Fruit does not have these regulations, for instance.  Walter said the Fruit cannot afford to lose business from customers who have abstained from getting vaccinated or prefer not to wear a mask.

Early in the pandemic, the venue required proof of vaccination and checked temperatures at the door. They revised these regulations when Omicron came around.

It’s easy for patrons to fake vaccination cards, Walter said. With that in mind, and given the area’s relatively high vaccination rates, the venue decided to let individuals monitor their own risk. Now, the venue leaves it up to concert-goers to determine if they want to mask or social distance.

Coming out of the pandemic, many venue owners are more conservative in how they view revenue sources.

“The money we make off of ticket sales, I now treat that like it’s fake money until we settle the show,” Roth said.

“Folks are just out of the habit of going out,”  he said.

Others noted that public demand for live events mirrors news coverage of COVID.

“As soon as the newspapers say there’s a lull in the current wave, a lot of people start going to shows who aren’t worried about spreading the virus,” Heath said.

Venue owners are trying to remain flexible in an ever-evolving situation. Many are finding people are willing to pay higher prices for tickets. Bands have capitalized on pent-up demand and are charging more to perform.

“Shows that were $15 dollars are now $20,” Heath said. He believes it will stay this way until the demand no longer allows for increased ticket prices.

Blue Note Grill has had similar staffing shortages and is working on automating its serving and payment processes to supplement the lack of servers.

“We’re rethinking how we serve the customers, so one server can handle more tables,” Whittington said.

Venues remain wary of another shutdown. Heath said that if ticket sales pick up for the rest of the academic year, it will be a promising sign that things can return to pre-pandemic levels.

“It’s hard to feel extremely optimistic until we have a month where nothing crazy happened,” he said. “I’m hoping that April will be that month.”

But the threat of another variant shutdown still looms, making many venue owners cautiously optimistic.

“I’m not sure what the next Greek letter is after Omicron,” Roth said. “But personally, I’m thinking about that.”

Above: Customers are returning to some live music venues, such as Durham’s Blue Note Grill. Photo by Milena Ozernova – 9th Street Journal