Home » Prosecutor spotlights victims’ needs — in and out of court 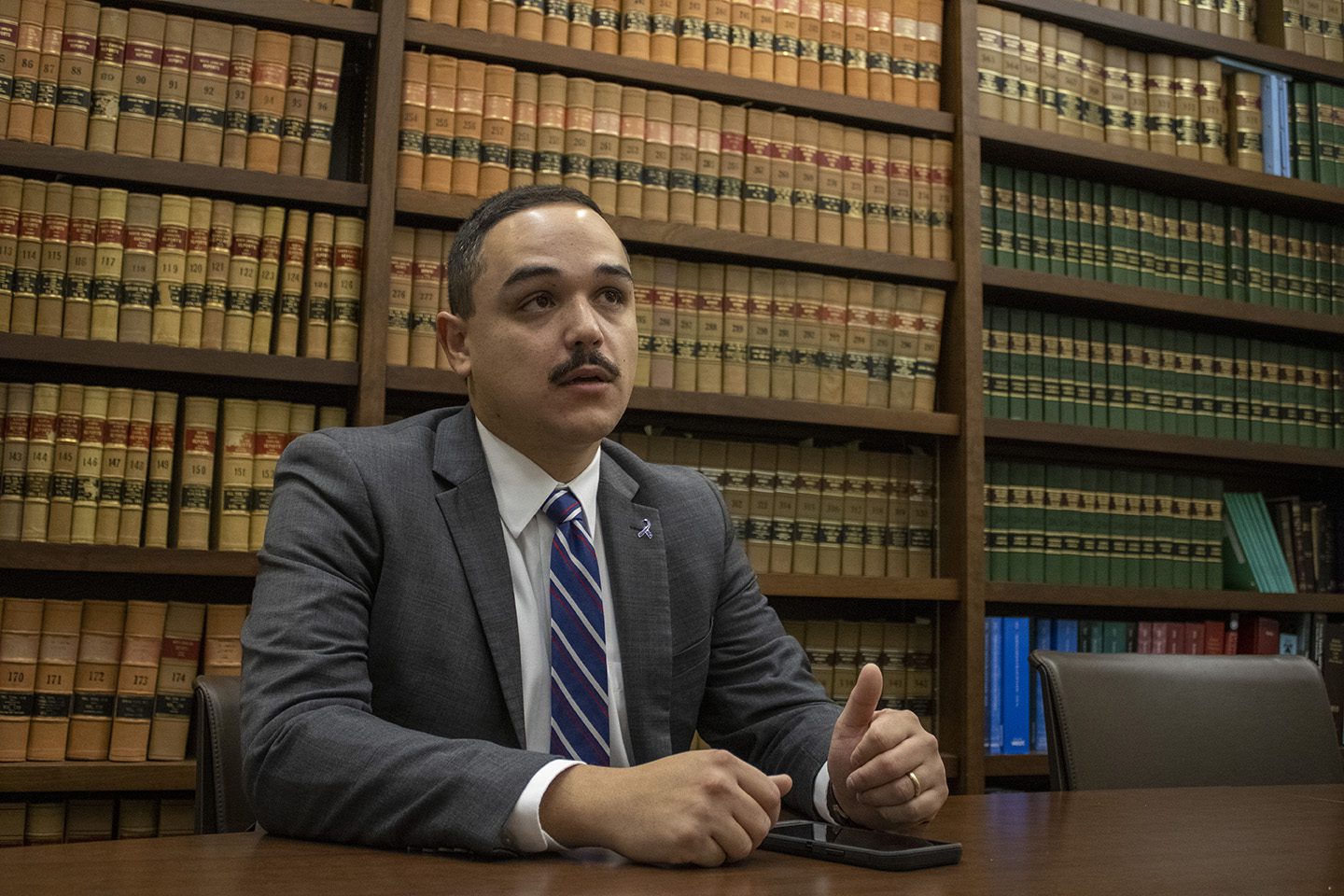 Prosecutor spotlights victims’ needs — in and out of court

Three years ago, Josh Sotomayor offered to mop the floors of the District Attorney’s office.

He had entered law school four years earlier with hopes of being a defense attorney. He graduated and realized he could better transform the criminal justice system from within.

Shortly after Sotomayor’s graduation, Durham D.A. Satana Deberry assumed office and ushered in her platform of reform. Half her office turned over, positions opened up, and Sotomayor applied.

“I’ll mop the floor,” he recalls telling Michelle Cofield, deputy chief of staff, during his interview. “Just hire me.”

In June 2019, Sotomayor was sworn in as a Durham Assistant District Attorney.

Under Deberry’s leadership, Sotomayor, who handles domestic violence cases with the special victims team, is now part of the change he wanted to see in law school. But rethinking how to prosecute crime also means rethinking traditional approaches to caring for victims, inside and outside of the courtroom.

“If someone feels heard, and feels actually heard instead of just lip service, it really goes a lot further than you would expect,” said Sotomayor, 30, who grew up in Charlotte. “They just want to feel that the [DA’s] response is tailored to what their needs are.”

On a Wednesday afternoon in November between court sessions, a legal assistant knocks on the door of Sotomayor’s office.

Sotomayor, the least experienced felony prosecutor in the D.A’s office, calls her in. The prosecutor sits behind his uncluttered desk in a white button-down shirt and a red, white, and blue striped tie. His dark hair is short, not quite a buzzcut, and he has a mustache, which sometimes looks out of place in contrast with his youth.

A red Solo cup, a pink water bottle, and an empty Red Bull can all stand in front of him. A card on his desk reads, “Bless this mess.”

Her voice hints at panic as she hands him a Post-It and asks if he’s familiar with a victim. Sotomayor repeats the name and his eyebrows furrow. In early September, the victim’s boyfriend had broken down her door and strangled her.

“She said that he’s outside [her house],” the legal assistant says, out of breath. “We told her to hang up and call 911.”

Sotomayor turns to his computer, furiously typing into a database in search of the case and the defendant’s name. His urgency is justified: women who have been strangled by an intimate partner are 750% more likely to be killed by the same person with a gun. Sotomayor’s controlled demeanor doesn’t break.

Sotomayor calls up a corporal at the Durham Police Department’s Special Victims Unit and tells him what happened.

“Can I send you the information and someone gets sent out over there?” he asks. He hangs up and says nonchalantly to the room, “Okay.”

“Good to go?” the legal assistant asks. He nods and she exhales. The whole interaction is over in seven minutes.

A large part of Sotomayor’s job is exchanging information and updates on “ongoing series of events that need attention” with groups like the Durham Police Department, Legal Aid, the Family Justice Center and the Durham Crisis Response Center. He not only builds cases; he also makes sure the victim is safe and supported.

“Not every prosecutor is going to be available to you all the time,” said Jeff Whitson, a legal advocate for the Durham Crisis Response Center, who helps victims navigate the legal system.

But Sotomayor makes himself available. Some days, the phone calls start before he even gets to the office at 8 a.m. and continue through the night.

“The amount of information that is being generated is oftentimes a lot faster than anyone can keep up with,” he said.

Sotomayor is, inadvertently, drawn to messes. He can’t explain it, except that he enjoys untangling intricacies and complex situations until justice finds its way out. Stalking and domestic violence cases are almost always messy.

A stalker might use a number of different methods on multiple instances over time. Sotomayor connects each instance to form one larger case, increasing efficiency for the court system and reducing stress for the victim.

An assistant district attorney’s interest and skill in finding the connections in these cases is rare, according to SVU team lead ADA Kendra Montgomery-Blinn.

“We’ve started to consider [Sotomayor] a specialist,” Montgomery-Blinn wrote in an email. “Law enforcement seeks him out in advance to consult during their investigations.”

“We let people know that just because you’re not moving forward this time, we’re not going to judge you if you come back to us,” Sotomayor said. “The end goal is that when there is a problem and you are on that seventh time, you can trust us with what’s going on.”

To build that trust requires effort. It means listening to victims’ traumatic experiences and connecting them with victim services. For those who want to pursue charges, Sotomayor guides them through a legal system that is not designed for victims. For those who don’t want to move forward, building trust means accepting that choice, even if, to him, it doesn’t seem like a safe move.

“Sometimes it seems like a fool’s errand,” Sotomayor said. But other times, the patience and relationship-building pay off.

In March 2021, a woman was adamant about not proceeding with a domestic violence case against her husband. She and Sotomayor talked for two hours before court one day, but she wouldn’t budge.

“I don’t get frustrated at this job often, but it would’ve been easier to talk to a wall about it. She wasn’t hearing it, which is fine, because I’m not telling people how to react,” he said. “But it was concerning.”

In the end, the case was dismissed at the victim’s wish.

Several months ago, Sotomayor picked up a phone call and found her on the other end. She was calling to tell him that he was right. Her husband stopped abusing her for a month after the dismissal. Then he returned to his old ways.

Now, with the help of the Family Justice Center and Legal Aid, she is filing for divorce and custody of their children.

Whitson said victims whom Sotomayor worked with described him as very approachable. He pointed out that Sotomayor is always mindful of the kind of justice a victim seeks, including classes, conviction, plea or jail time for the defendant.

“He actually listened to what they had to say,” Whitson said. “And for the most part, respected their wishes. I can’t remember a time when he completely went against a client’s wishes.”

As Sotomayor describes getting lost in the D.A.’s office on his first day, his phone rings. It’s the corporal with an update. Durham police have arrived at the apartment complex of the woman who called earlier.

“[The defendant’s] sister lives across the hallway,” he says after hanging up. He raises his eyebrows and pauses dramatically. “Allegedly.”

Sotomayor finds out that there is an existing no-contact order against the defendant by the victim, but the victim’s apartment complex’s address isn’t listed on the order. It’s unclear, then, if the defendant is violating the order by visiting his sister.

When Sotomayor started at the DA’s office, he feared that he wouldn’t be able to hack it — the domestic violence caseload, the secondary trauma.

“You’re dealing with someone’s worst day. Something tremendous has happened and tremendous in the worst possible sense,” he said. “How is that going to go?”

But on a wall in his office, under a triptych of Washington Crossing the Delaware that he bought on Amazon, hangs a plaque — his Victim Services Award for Distinguished Prosecutor, which he received in April 2021 from the U.S. Attorney’s offices for the Eastern, Middle, and Western districts of North Carolina and the state’s Victims Services Interagency Council. Those who nominated him, according to a press release, noted his “victim-centered approach” and “genuine concern for the victim’s safety” in a domestic violence case.

“These kinds of cases are emotionally wearing,” Montgomery-Blinn wrote. “But they are also the cases where a dedicated prosecutor, like Josh, can have the biggest impact.”

Sotomayor no longer has the same concerns. Asked if the demands of the role can lead to burnout, his answer was simple. If you really care about the work — the cases and the people — you can do this job for a long time.

Published in Courthouse Project and Uncategorized