Home » ‘I voted’ pens are an odd souvenir of the pandemic 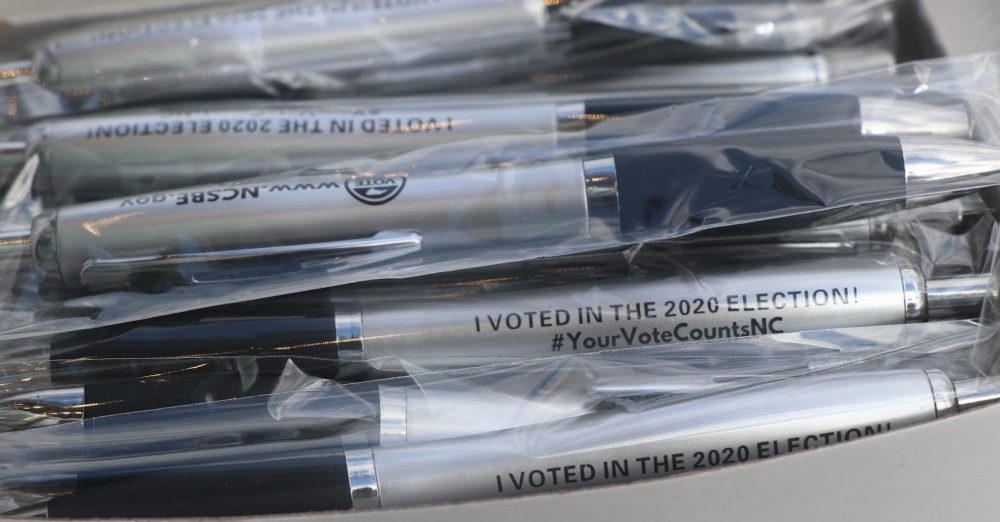 ‘I voted’ pens are an odd souvenir of the pandemic

When it was time to buy pens for the 2020 election, the North Carolina State Board of Elections went big:  6 million. Well, 5,909,820 to be exact. That’s enough to cover 520 miles and weigh more than six school buses.

The pens “minimize the potential spread of the coronavirus because the voter will be the only person to touch their own pen,” said Noah Grant, a spokesman for the board of elections. Also, they’re a souvenir of an election you’ll never forget.

They’re paid for by a $1 million grant from the Center for Tech and Civic Life, a pro-democracy group funded by tech companies and foundations.

Grant helped design the retractable, metallic “I voted in the 2020 election!” pens. But not all early voters got one because the big order arrived a few days late.

Archie Services in Greensboro, winner of the state’s bid for the cheapest pen, had just under a month to fulfill and deliver the pens to over 85 sites across the state.

Durham voter, David Lorimer, shows off his free pen that he says he’ll use in the future.

The day before early voting began, Brent Archie, owner of Archie Services, had to take matters into his own hands when he realized that some polling sites wouldn’t get the custom pens in time.

As large shipments of pens sat lost in a Chicago warehouse, he and his team desperately wiped their Charlotte warehouses clean of other types of pens. When that wasn’t enough, Archie drove to his Atlanta warehouses, covered over 1,200 miles in 18 hours, and personally helped deliver 180,000 backup pens the night before early voting began on Oct. 15.

“I really wanted everyone to have that pen the first day,” he said. Still, he was disappointed the first voters didn’t get the souvenir version.

Sites eventually received the thicker, hourglass-shaped pens. But it’s hard to please everyone.

Durham voter Amady Barrie wished he had that black backup pen instead.

“Oddly enough, when I was writing with it, I was thinking, ‘How come every pen isn’t like a sleek Bic pen?’” said Barrie.

With only five days left until election day, 3 million North Carolinians have already voted in-person. That leaves about 3 million pens. Is that enough to cover the rest of early voting and Election Day? State officials believe it is. If not, the state board of elections is prepared to dip into federal funding from the Coronavirus Aid, Relief, and Economic Security (CARES) Act, according to Grant. If a polling center runs out of pens, the site can request additional ones or change to the process of collecting and sanitizing pens for reuse.

At some locations, the pen replaces the popular “I voted” sticker. Many counties cannot afford the transmission-reducing sticker dispenser used in Durham, nor do they have the spare election workers to cut rolls of stickers into singles, said Grant.

Durham, however, is still giving stickers – a custom version that says “No bull, I voted.”

On Tuesday, voters left the early voting site at the Durham County Main Library with the sticker and pen.

Bianca Evans, a self-proclaimed “pen lady,” said she was excited to receive one and plans on using it “until it stops working.”

Others were not so enthusiastic.

Grant views the pen in a larger context. “It’s a memento to how much our world has changed in 2020.”