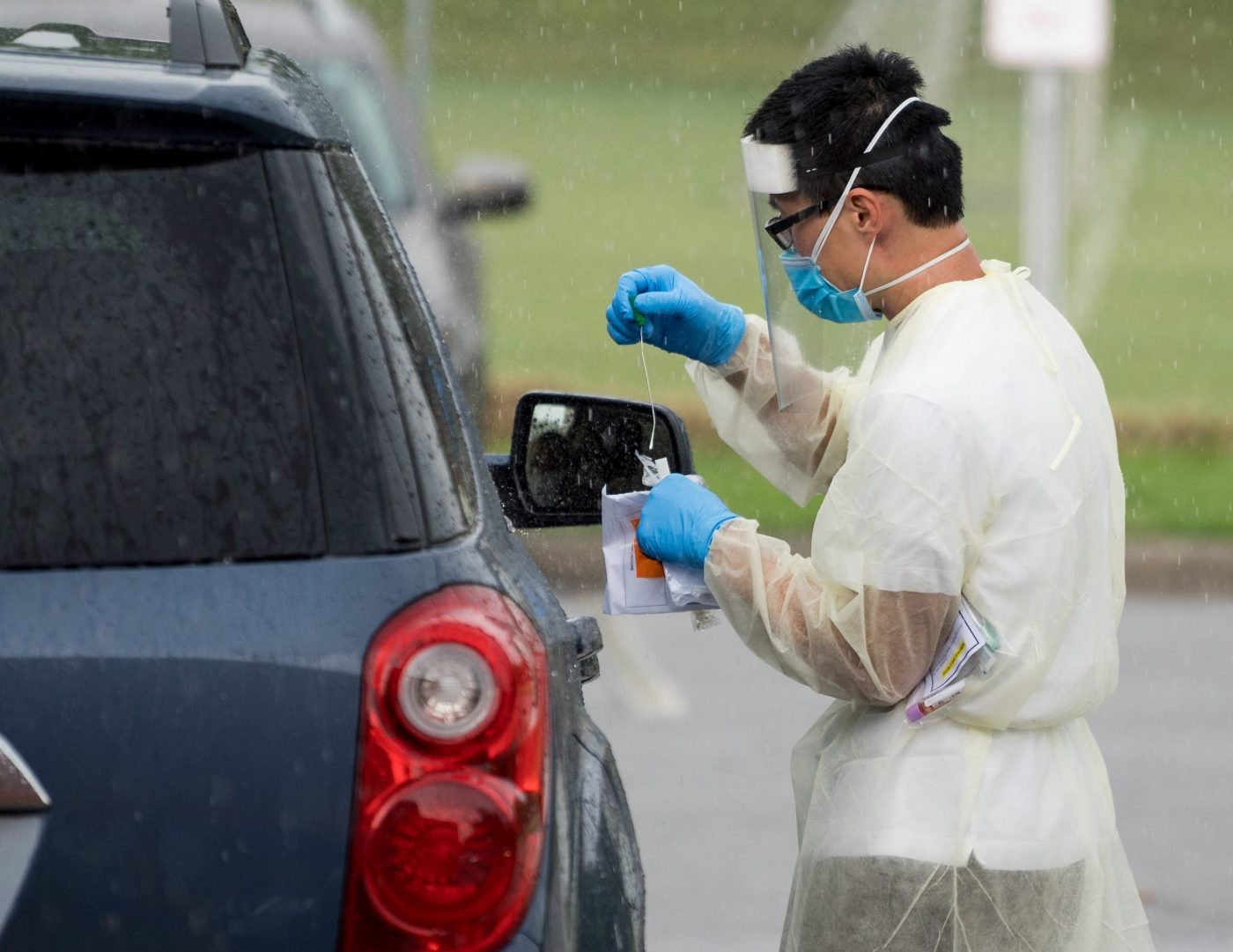 This summer, a Latinx family welcomed a newborn in the midst of a pandemic. As the baby girl lay in the nursery of Duke Regional Hospital, mother and father shared worries with Dr. Rushina Cholera, a pediatrician-epidemiologist.

Because the father works in construction — an industry with some of the highest rates of COVID-19 among Latinx men — they feared for the family’s health.

The father said he wears a mask every day, but Cholera soon realized he did not know he was at risk because his coworkers do not.

“Wearing a mask protects the people around you,” she said. “You are not protected from getting it from them.”

More than four months into the coronavirus outbreak in Durham County, members of the Latinx community still don’t have all the information they need to protect themselves and their families.

“We missed the boat on that early on,” Cholera said.

Latinx residents are disproportionately affected by COVID-19. Despite representing only 14% of Durham County’s population, they make up 61% of reported cases in Durham. Statewide, Latinx people are 10% of the population and 42% of confirmed cases.

Doctors, community advocates and experts say there are still many misconceptions about the spread of COVID-19 in Latinx communities, as well as a lack of testing. That’s because people have not always received Spanish-language and culturally relevant messaging about the virus, they say.

“There has to be factual, culturally appropriate messaging in Spanish,” said Cholera, who is in the National Clinician Scholars Program, a training program for clinicians working to address health disparities.

Latinx residents are also vulnerable because they make up a large portion of essential workers in Durham. They often don’t receive paid-sick leave, and they can be wary of accepting government help when they aren’t yet citizens.

In Durham there is now a more concerted effort to address this disparity through targeted testing and communication about immigration policies that may be preventing Latinx residents — especially those who are undocumented — from seeking care. But there is much to overcome.

In March, doctors Viviana Martinez-Bianchi and Gabriela Maradiaga Panayotti, who are Latinx, started Latin-19 in Durham with a dozen people to address the disproportionate rate of COVID-19 among the Latinx community.

Along with local government officials, they are trying to educate Latinx residents about misconceptions regarding regulations that affect immigration decisions, such as Public Charge, associated with COVID-19. There is a need to ensure that “real information” is presented to the community, according to Martinez-Bianchi.

Fearful of being deported or that accessing care will affect their likelihood of being granted permanent resident status, many Latinx residents in Durham are hesitant to get tested and give information to contact tracers, said Martinez-Bianchi.

The Trump administration has promoted hostile rhetoric against undocumented immigrants and expanded  restrictive immigration policies. Under the Obama administration, interior removals focused on people who posed a threat to national security and individuals with serious criminal convictions. Trump overturned these priorities by executive order and instituted policy that now targets any undocumented immigrant, regardless of social, economic or family ties to the U.S.

In February, the Trump administration expanded the federal public charge rule to consider an applicant’s receipt of federally funded benefits like Medicaid, Supplemental Nutrition Assistance Program and housing subsidies in determining whether to grant a green card. That has made people without legal immigration status more reluctant than ever to accept government services, said Cholera.

In March, the U.S. Citizenship and Immigration Services stated that it will not count COVID-19 testing, treatment or preventative care against immigrants seeking legal status.

“Number one, having to go to the hospital is not going to cost your citizenship,” Martinez-Bianchi said.

But too few people know that.

Lawyers with Latin-19 are working to quell concerns about accepting care and resources. Doctors assure patients that they can go to the hospital without it being counted as a public charge. Community members translate important pandemic safety messages like the three Ws — wear a mask, wait six feet apart, and wash your hands — for public service announcements, videos and posters.

Another issue is pandemic-related financial support that some immigrant families can’t access, including government stimulus checks under the CARES Act passed by the federal government on March 27.

Those without a social security number are ineligible for money from the federal Coronavirus Relief Fund. Mixed-status families, where one member is a U.S. citizen or permanent resident and another is not but pays taxes with an individual tax identification number to the IRS, are also prohibited from receiving money.

“Immigrant families were put in a position where they were extremely economically dependent on keeping jobs throughout this, and were not able to pay for basic needs like food and housing without a stimulus check,” said Cholera.

Latinx vendors recently protested their treatment at a local flea market, where some make income they depend on during the pandemic, said Italo Medelius, vice chair of the Durham Mayor’s Hispanic-Latino Committee. They alleged that City-County Planning Department staff threatened them with fines and law enforcement for doing business on a lot owned by the state Department of Transportation.

The City-County Planning Department issued a statement Friday saying the staff followed departmental procedures, but the situation could have been handled differently. Department members have offered to help find alternative locations for the vendors.

According to the Durham County Department of Public Health statistics,  the two zip codes in the county with the highest COVID-19 rates are 27704 and 27703 on the east side, with infection rates of 28.25 and 18.61 per 1000 persons respectively. These areas are where many Latinx residents live, according to Martinez-Bianchi.

“Testing is a problem, especially when it is not present where the most vulnerable communities live,” Martinez-Bianchi said.

Director Rodney Jenkins of the Department of Public Health said otherwise in his update about testing in Durham during the Recovery and Renewal Task Force meeting on July 17.

“Durham continues to do a very good job with our testing,” said Jenkins, referring to the number of tests administered.

The number of tests in Durham County is not the problem. It’s where testing sites are located, said Martinez-Bianchi.

On July 11, the county did set up a new three-day testing site in zip code 27703, located in the parking lot of Holton Wellness Center on North Driver Street.

Staff and volunteers there try to test from 50-75 people, by appointment only on Saturday from 9 am to 11:30 and on Tuesday and Thursday from 4:30 to 7:30 pm to accommodate people who work, especially construction workers, Jenkins told the Recovery and Renewal Task Force on July 17.

People seeking testing are given educational materials, in Spanish where needed, and enough food to support a family of four for about two weeks in case they test positive and must quarantine themselves, according to Jenkins. Jenkins also reported that the site had about a 50% success rate for testing on July 11, meaning nearly half the tests taken that day returned positive.

Martinez-Bianchi said she would like to see mobile testing in Durham that targets neighborhoods with rising COVID-19 diagnoses, specifically in the Latinx community. That is happening in Mecklenburg County, home to Charlotte, she said.

Jenkins said his department’s current plan is to replace testing at the Holton parking lot with testing at El Centro Hispano, a non-profit that supports the local Latinx community.

At the beginning of the pandemic, none of the messaging from the local government was in Spanish, said Martinez-Bianchi.

In addition to inaccessible messaging, it was also not culturally appropriate, Cholera and Martinez-Bianchi said.

Many Latinx households are multi-generational, with more than five people living in the home, Cholera said. Much of the guidance for social distancing was “not practical and not specific” to how these households should protect themselves and each other, she said.

“Togetherness is usually a big part of the resilience of the community. And in this case, it has actually acted against them. Because the virus loves that kind of environment,” said Martinez-Bianchi.

Martinez-Bianchi also highlighted the lack of public and private resources to help people once a family member tests positive to move out of residences housing multiple generations.

There has been hope that the state or organizations would fund hotel rooms to quarantine individuals who live in small homes with multiple people, said Cholera, though this program is not yet instituted in Durham County.

Some local organizations like the Immigrant Solidarity Fund and El Centro Hispano work to financially support immigrants regardless of documentation.

These advocacy groups cannot guarantee that ICE won’t seek information about undocumented residents from all who are trying to help them, said Pilar Rocha-Goldberg, president of El Centro Hispano, in the Recovery and Renewal Task Force meeting on July 17.

As officials continue to work on accessible testing, Martinez-Bianchi said it’s also important to give people peace of mind.

“What has to be promised is that data is not going to be shared with those who can damage this community,” said Martinez-Bianchi.

At top: Dr. Alex Cho administers a coronavirus test during a thunderstorm on Thursday outside Holton Wellness Center in Durham. Photo by Henry Haggart