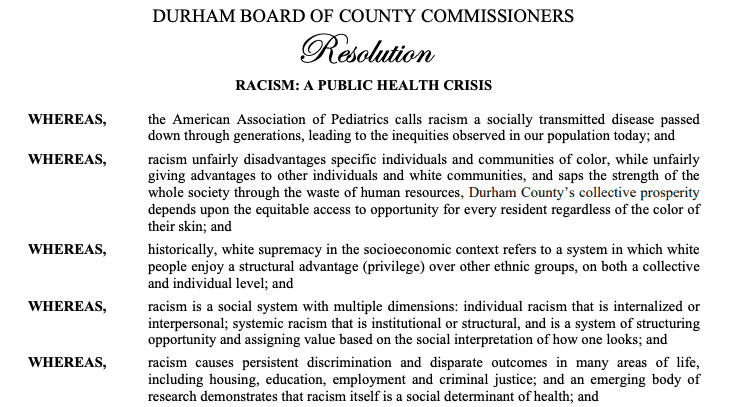 As a young woman, Wanda Boone was the first African-American to work outside of the kitchen at the hospital where she was employed. Later, while an executive elsewhere for 20 years, she endured daily racist treatment on the job, she said.

Such experiences take a toll. That is one reason why Boone, a member of Durham County’s health task force, spoke Monday about the importance of county commissioners approving a resolution declaring that racism is a public health crisis in Durham.

“I think what happened with the murder of George Floyd, his death for me personally opened the floodgates. The trauma I experienced as a child, throughout all of my life, until the day that it happened, came rushing down on me, so this resolution wasn’t something that’s taken lightly,” said Boone, co-founder of Together for Resilient Youth, which works to reduce substance abuse among young people.

At a time when protests against police violence against black Americans continue across the United States and elsewhere in the world, commission members made time Monday to discuss the resolution, which all five commissioners have signed.

It lists ways racism affects people’s daily lives, from police violence within the African American community to disparities in the birth weight of black newborns in Durham. It notes  eight steps commissioners will take, including promoting equity through all county policies and supporting policies that prioritize the health of all people, especially people of color,  by decreasing exposure to adverse childhood experiences.

Discussion about the resolution was scheduled to last 10 minutes. But it went on for almost an hour while commissioners and staff members spoke about their commitment to fight racism in all things, including land use, economic development, and transportation plans.

“There is no room for racism or hatred within our community,” said County Health Director Rodney Jenkins. “Policy change is the only way we’re going to bring about true health care throughout our community”.

Chairwoman Wendy Jacobs wanted to expand the discussion beyond the resolution. She brought up a letter from the City-County Committee on Confederate Monuments and Memorials about a Confederate memorial outside the former courthouse in downtown Durham. Protestors tore down a statute of a Confederate soldier atop the monument in 2017.

Jacobs said she wanted the board to move toward declaring the pedestal of the 96-year-old monument a public health and safety hazard. An inscription on it reads “IN MEMORY OF THE BOYS WHO WORE THE GRAY”.

Commissioner Brenda Howerton said she was hesitant to bring up the letter at the meeting. “I don’t understand forcing this thing on the agenda tonight,” she said. “The statue is important, but right now I think people are really suffering around black and brown people being shot and killed”.

Commissioners also spent more than an hour discussing the $675.6 million 2020-2021 county budget, which passed by a 3-2 vote. The discussion revealed that revenue losses linked to the coronavirus outbreak will limit some of what commissioners can do, at least in the coming months.

Commissioner Heidi Carter argued that, in line with the racism-is-a-public-threat resolution, that the budget should include full funding to provide Durham Public School employees such as bus drivers, administrative assistants and janitors with a $15-an-hour minimum wage.

Facing budget restraints caused by the coronavirus, a majority of commissioners did not agree. But commissioners are expected to return to the topic in January.

At top: A portion of  the proclamation declaring that racism is a public health threat. Durham county commissioners signed it Monday.