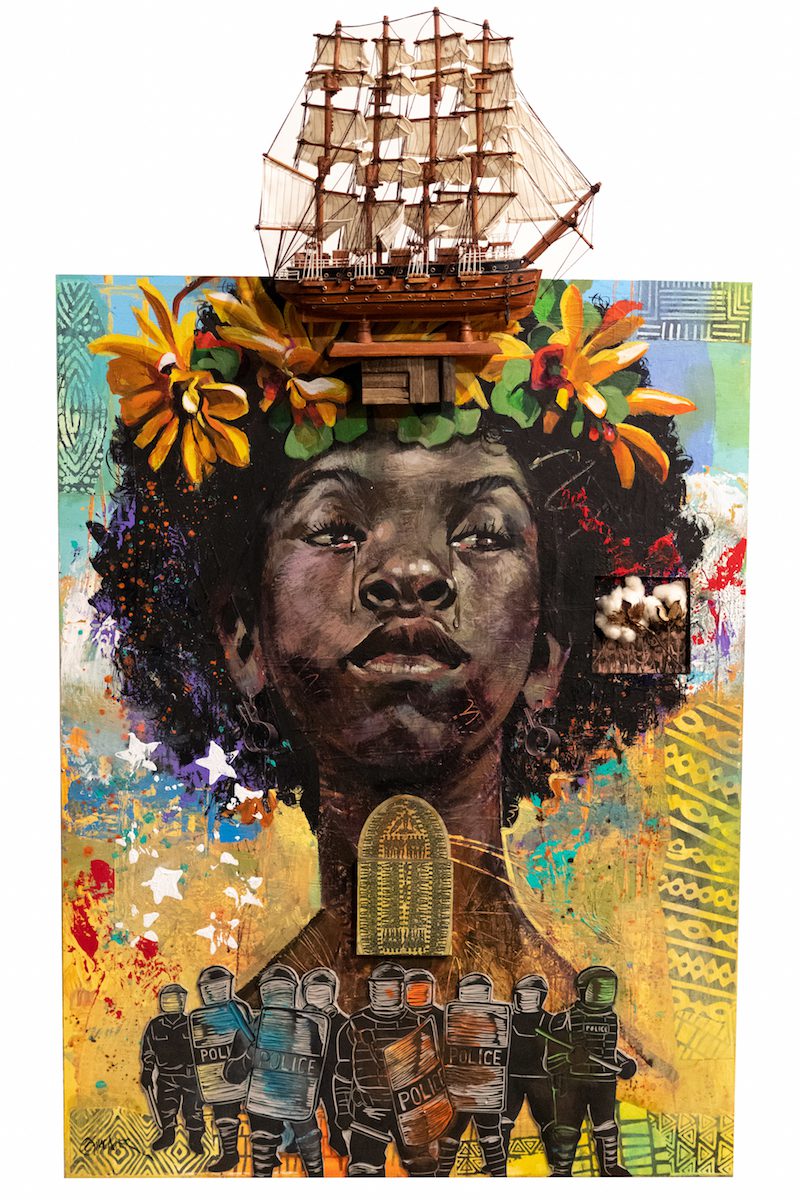 All who entered NorthStar Church of the Arts one night last month passed an artist’s rendering of Colin Kaepernick. A halo-like shape circled the activist quarterback’s head; a rope noose hung around his neck. Nearby was a mixed-media image of a crying woman with a slave ship nestled in her hair.

At the launch of the newest issue of Southern Cultures, a Center for the Study of the American South quarterly, every seat and slab of wall was full.

The following night the doors opened to the scent of generously buttered popcorn and squeals of small children running at top speed. The room was not pushing capacity, but a bright energy surged for a Dolly Parton birthday party. NorthStar had four hours blocked off for Dolly trivia and a “9 to 5” screening.

NorthStar Church of the Arts is a venue housed in a Gothic Revival former church near Durham’s Central Park. Phil and Nnenna Freelon, accomplished in architecture and jazz respectively, founded it to be a “sacred space” where arts and the spiritual connect.

“We are trying to bridge the gap between what religion and art does for people. I feel called as an artist to pick up the slack that religion is dropping the ball on,” said Kamara Thomas, a member of NorthStar’s board.

Nearly one year after its official launch, NorthStar is forging its identity. An arts venue to showcase local minority artists first and foremost, it sometimes invites people in to bop to “Jolene.”

“NorthStar is very much a product of Durham. Durham is a creative queer, black, diverse, multicultural, intergenerational, historic city, and NorthStar is also all those things,” said Pierce Freelon, son of the founders and NorthStar’s artistic director.

Heather Cook, a good friend of Pierce Freelon’s, had attempted to acquire the NorthStar building. But the Freelons got there first not knowing that Cook, active in arts programming for years, had her eye on it. Now she is NorthStar’s executive director.

In 2019, more than 5,000 people attended 102 NorthStar events, generating $18,000 in ticket sales, according to numbers shared by NorthStar. Dollars are important because a primary goal is to raise money to pay local artists, Cook said.

The venue’s website poses questions, including, “What if church was a place where artists were praised and poets were prophets?” In step with that, NorthStar hosts poets like Jaki Shelton Green and Dasan Ahanu, as well as organizations such as SpiritHouse, a longtime black-women led cultural group that supports people contending with racism, poverty and more.

NorthStar’s vision is guided by Durham icons like civil rights pioneer Pauli Murray, the first African-American woman to become an Episcopalian priest, and  Baba Chuck Davis, the founder of the African American Dance Ensemble. Both pushed the bounds of societal and artistic norms, Pierce Freelon said.

“NorthStar feels very much at home being outside of the box as a celebration and a manifestation of Durham’s diverse history and future,” said Freelon, a state Senate candidate this year. “We want to uplift different prophets  that may not fit within the construct of the biblical canon,” he said.

Angela Lee, executive director of the Hayti Heritage Center, praises what’s happening at the corner of North and Geer streets. “Their mission and what it’s doing to help to promote culture in Durham is significant,” said Lee, who runs Durham’s oldest and largest church-turned-hub for black culture.

In year one, NorthStar had a different celebrant delivering a monthly “Sunday service” in the mornings. This year the black feminist couple Alexis Pauline Gumbs and Sangodare are NorthStar’s celebrants in residence.

They will lead discussions of work by figures like Murray, who was also a poet, labor organizer, and activist lawyer, and Octavia Butler, the acclaimed science-fiction author. Their next service will be at 11 a.m. on Feb. 16.

For all this momentum, NorthStar is still developing. It relies deeply on volunteers since Cook is the only employee  member. In 2020, a major goal is to hire more, Cook said.

Like all houses of worship, NorthStar is a place to confront grief as well as joy. Phil Freelon, known building designs across the United States, including the National Museum of African American History and Culture, died in July. After his funeral, the Freelon family held a reception at NorthStar.

After Freelon’s death from amyotrophic lateral sclerosis (ALS), his family made clear he had hoped others would  help his family support NorthStar.

Instead of sending flowers in sympathy, his family asked mourners to donate regularly to NorthStar “so that the same creative and spiritual energies that nurtured him throughout his life, may positively impact others, especially in his adopted home of Durham.”

At top: Charly Palmer’s mixed media piece “400 Years” was among the art displayed for last month’s launch of the latest issue of the journal Southern Cultures. 9th Street Journal photo by Victoria Eavis

Correction: This story was corrected to state that Heather Cook is NorthStar Church’s of the Arts only employee.